Software Updater poping up every day - is this common in Linux?

I am very new in Ubuntu. Every day - some days more than once - a Software Updater appears in my left side bar. Is this normal in linux? Do I really have every day to see this and restart my computer? Obviously, I don't want to miss the updates recommended for Ubuntu, but too often seems to be useless. Is there a way to configure for updater to automatically install the most important packages? or only search for the real important ones? I am basically a Java developer who will use Eclipse, MySql and Tomcat with some frameworks.

Yeah that's normal. You can disable it or reduce the frequency.

To disable it, go to 'Startup Applications' (you can search for it in the dash) and unchecking 'Update Notifier'. These applications can be hidden sometimes and you need to show them. See this question: How do I add/remove the "hidden" startup applications? 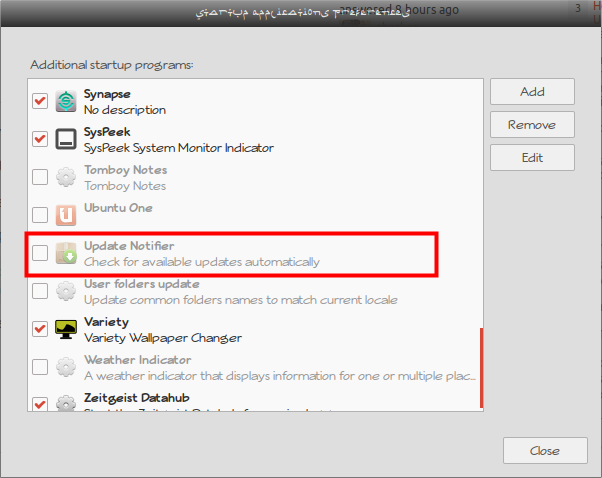 Then make sure you periodically run these commands in terminal:

To reduce the frequency, see the answer above by @chakes,

You can change how often the system looks for updates in System Settings >> Software & Updates >> Updates tab.

In general, you can set it to check for updates no more than every two weeks if you want. You can also set the interval for security updates separately to make it more frequent.

This is common, most often these are security updates. You may not notice an impact but they are definitely recommended.

A note on the "is this normal" part of the question:

In general, open source software is released much more frequently than commercial software. Also, a system like Ubuntu is a large constellation of "small" software packages that work together to provide you a seamless user experience. Many of these packages are specialised code libraries that you may never know about, but end up doing something that is useful for some end user application. This is one of the defining characters of open source software: instead of large monolithic applications you have a extended web of dependencies.

In the system where I am writing this I have over 4 000 packages installed, so it is easy to have at least one update per day.

59
How do I add/remove the “hidden” startup applications?