How to get dialog box input directed to a variable?

I have been teaching myself bash scripting and have run into an issue. I have written a script to take input from the user, using the 'read' command, and make that input a variable to use later in the script. The script works, but....

I would like to be able to get it setup using 'dialog'. I found out that

'dialog --inputbox' will direct the output to 'stderr' and in order to get that input as a variable you have to direct it to a file and then retrieve it. The code I found to explain this is:

I see that it is sending the sdterr to the /tmp/inputbox.tmp.$$ with 2>, but the output file looks like 'inputbox.tmp.21661'. When I try and cat the file it gives me an error. So I am still unable to get the user input from the --inputbox as a variable.

So as you can see it is a basic script. Is it even possible to get the variable as a word from dialog --inputbox?

:D I can't explain it!!! If you can understand what they are saying in Advanced Bash-Scripting Guide: Chapter 20. I/O Redirection, write a new answer and I will give you 50rep:

Reference: Dialog in bash is not grabbing variables correctly

As requested, I will try to explain what this snippet is doing line by line.

Note that I will simplify it by omitting all the ; semicolons at the line ends, because they're not necessary if we write one command per line.

First, you need to understand the communication streams. There are 10 streams, numbered from 0 to 9:

Note that all "streams" are internally represented by file descriptors in /dev/fd (which is a symbolic link to /proc/self/fd which contains another symbolic link for every stream... it's a bit complicated and not important for their behaviour, so I stop here.). The standard streams also have /dev/stdin, /dev/stdout and /dev/stderr (which are symbolic links again, etc...).

First, we set the shell up to redirect everything we send to the custom stream 3 back to STDOUT, so that it shows up in our terminal.

Then we run the dialog command, redirect its original STDOUT to our custom stream 3, because it needs to get displayed in the end, but we temporarily need to use the STDOUT stream for something else.
We redirect the original STDERR of the command, where the dialogue window's user input gets returned, to STDOUT afterwards.
Now we can capture the STDOUT (which holds the redirected data from STDERR) and store it in our variable $result. It contains the wanted user input now!

We also want the dialog command's exit code, which shows us whether OK or CANCEL was clicked. This value is presented in the reserved Bash variable $? and we just copy it to our own variable $exitcode.

After that we close stream 3 again, as we don't need it any more, to stop further redirections of it.

Finally, we normally output the contents of both variables $result (the user input of the dialogue window) and $exitcode (0 for OK, 1 for CANCEL) to the terminal.

If you read man page for dialog, there is option --output-fd, which allows you to explicitly set where the output goes (STDOUT 1 , STDERR 2), instead of by default going to STDERR.

Bellow you can see me running sample dialog command , with explicitly stating that output must go to file descriptor 1, which allows me to save it into MYVAR. 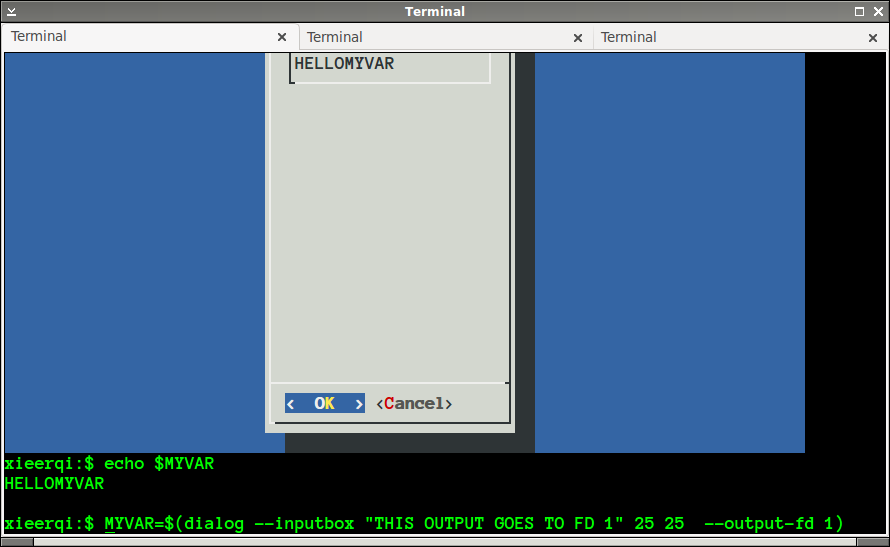 Alternative approach which has a lot of hidden potential, is to use something known as named pipe. 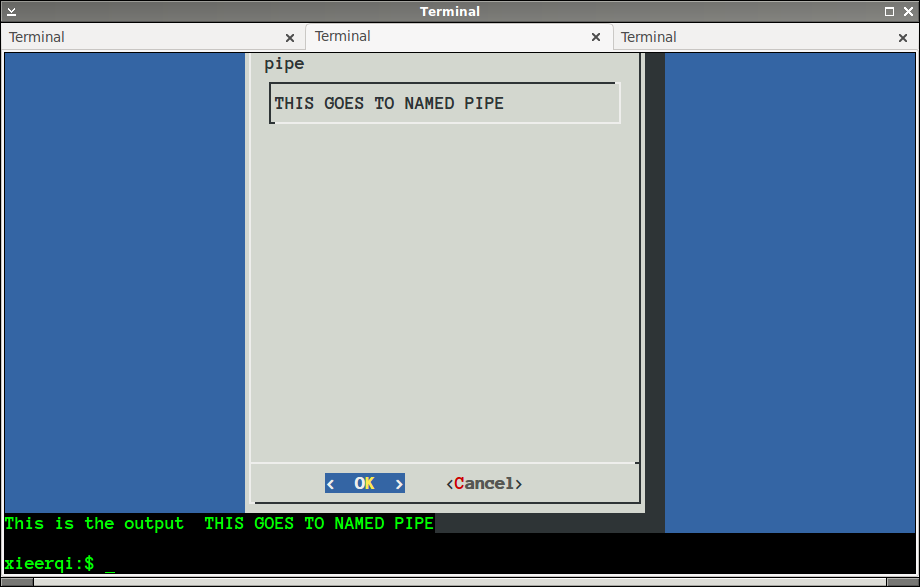 A more in-depth overview of user.dz's answer with alternate approach

The original answer by user.dz and ByteCommander's explanation of that both provide a good solution and overview of what it does. However, I believe a deeper analysis could be beneficial to explain why it works.

First of all, it is important to understand two things: what is the problem we're trying to solve and what are the underlying workings of shell mechanisms with which we're dealing. The task is to capture output of a command via command substitution. Under simplistic overview that everyone knows, command substitutions capture the stdout of a command and let it be reused by something else. In this case, the result=$(...) part should save the output of whatever command is designated by ... into a variable called result.

Let's go back to the original answer for a second. Since now we know that dialog writes the TUI box to stdout, answer to stderr, and within command substitution stdout gets piped somewhere else, we already have part of the solution - we need to rewire file descriptors in such way that stderr will be piped to the reader process. This is the 2>&1 part of the answer. However, what do we do with TUI box ?

That's where file descriptor 3 comes in. The dup2() syscall allows us to duplicate file descriptors, making them effectively refer to the same place, yet we can manipulate them separately. File descriptors of processes that have controlling terminal attached actually point to specific terminal device. This is evident if you do

where /dev/pts/5 is my current pseudo-terminal device. Thus, if we can somehow save this destination, we can still write the TUI box onto terminal screen. That's what exec 3>&1 does. When you call a command with redirection command > /dev/null for example, the shell passes it's stdout file descriptor and then uses dup2() to write that file descriptor to /dev/null. The exec command performs something similar to dup2() file descriptors for the whole shell session, thus making any command inherit already redirected file descriptor. Same with exec 3>&1. The file descriptor 3 will now refer to/point to the controlling terminal, and any command that runs in that shell session will know about it.

Now, there's actually a short-hand for the current controlling terminal of the process, which is /dev/tty. Thus, the solution can be simplified without use of file descriptors, simply into:

:D I can't explain it!!! If you can understand what they are saying in the reference:Advanced Bash-Scripting Guide: Chapter 20. I/O Redirection, write a new answer and I will give you 50rep

Bounty was given, for explanation see ByteCommander's answer. :) This is a part of the history.

This works for me:

The manual page of dialog tells about --stdout:

Direct output to the standard output. This option is provided for compatibility with Xdialog, however using it in portable scripts is not recommended, since curses normally writes its screen updates to the standard output. If you use this option, dialog attempts to reopen the terminal so it can write to the display. Depending on the platform and your environment, that may fail.

Can anyone tell in which platform or environment it does not work? Does redirecting dialog output to 2>&1 >/dev/tty instead work better then?

The answer provided by Sneetsher is somewhat more elegant, but I can explain what's wrong: The value of $$ is different inside the backticks (because it starts a new shell, and $$ is the PID of the current shell). You'll want to put the file name in a variable, then refer to that variable throughout instead.

In this case, avoiding the temporary file would be a better solution, but there will be many situations where you cannot avoid a temp file.

In case somebody else too landed here from Google, and although this question asks specifically for bash, here is another alternative:

You can use zenity. Zenity is a graphical utility that can be used inside bash scripts. But of course this would require an X server as user877329 rightfully pointed out.

Then in your script:

0
How to handle multiple parameters from a user's selection in a checklist menu?
606
How to redirect stderr to a file
313
What is the difference between "Redirection" and "Pipe"?
29
Request root privilege from within a script
21
What does & mean exactly in output redirection?
1
Bash: sudo -S <<< "mypassword" - interactive shell issue
2
Create bash script that allows you to choose multiple options instead of just one?
3
Simple GUI for various bash command
0
Create a simple GUI installer page for my shell script

1
Newbie grep question.... output is doubled
4
How can I make my bash script open cat for input, and then save input to a variable in the script
3
example of console output that is not written to standard output
8
How to get bash file to echo differently based on user input?
2
read input from a file and append that values to variables using shell
0
How to pass a value to read input before being prompted?
0
Landscape Script timed out while executing bash script
1
How I can print the content of an array in columns ands rows