Is it possible to set a new nice level of a running process with a known id?

Does this operation require root access, or just being the owner of the process?

If you're at a terminal you can use renice

A simple example would be

You can also pass it hard flags, but it follows that order (you have to pass priority first and then the pid - if you change the order it will show the usage messagge)

Priorities work on a scale of -20 to 19 - The lower the number, the higher it's priority on the system.

If you own the process then you won't need root - however, if the process is owned by another user or if you plan on changing the group/user of the process root (via sudo) will be required.

Prior to 11.04: System > Administration > System Monitor. Choose Processes.
In 11.04: Alt+A and search for system monitor.

The id's are shown in the image here: 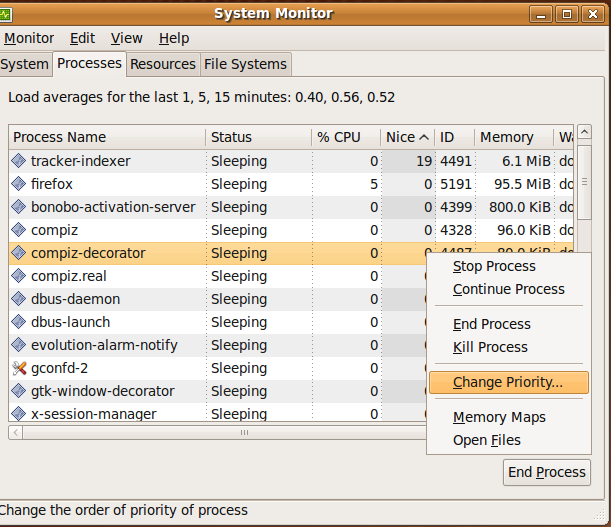 And nice does not require sudo for increasing niceness if you own the task. It does if you need to decrease niceness.

Start a command with nice:

Usage of "renice" in terminal is as follows:

Using "sudo" before command "renice" elevates user to root level and an admin/root password will be required.

So e.g. if you want to elevate process with PID (process ID) 2606 from Normal priority to High priority, you would type in terminal as follows:

You can also renice a process within top.

You can add capability CAP_SYS_NICE to user using Linux capabilities system if you don't want to grant full root access to user/script.

Unfortunately, it still allows to renice arbitrary process, including those owned by different users.

Not the answer you're looking for? Browse other questions tagged process-priority nice or ask your own question.

0
Task Manager Won't Let Me Set Task Priority
0
How can I make a program start at a higher priority?
30
How to free up the memory in the best way
4
Gradle compiling slows down my computer
4
why can user increase nice of process but decrease requires root?
2
Run Task Manager In Xubuntu as Superuser
2
Telling the kernel to prioritize swapping of a certain application?
0
Distribute workload among different CPUs
0
Working with multiple terminals one of which is mission critical?
0
Xubuntu runs well in recovery mode but freezes in normal mode
See more linked questions

7
Why the process priority of Pulseaudio is -11?
3
Cant change niceness even after editing limits.conf
2
How does process priority influence a process
0
Which niceness to give to prevent freezing?
5
Low priority process (nice 19) getting more CPU time than regular process (nice 0)
7
How to change niceness of process by name
146
Process 'niceness' vs. 'priority'
3
Better nice: how can I pause a demanding process completely if the computer is unidle?
6
How to change "niceness" while perfoming top command?
0
Niceness and Priority of Processes