Why is /home/<user> called 'Home' in Nautilus (and other file managers, such as pcmanfm)?

Very simple question. When I am in my home directory in terminal and type pwd I get /home/<myusername>. And it is the same directory when I am in Nautilus Home section: 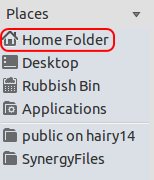 So why is the same directory but it's called different ways? It's sometimes confusing when going through the directories in terminal.

The "Home" in nautilus is simply a link to /home/<username>. It is the same way that windows puts different names (.e.g. "My Documents", but it's "Documents" in terminal).

It is to make it more user friendly, they want your "Home" space to be obvious how to find. It is only more advanced users that find that it is different - so you don't get conflicts with other users. It's also easier when helping someone remotely, to say "Click on home"

Typically, your home folder is /home/user but this is optional. A system administrator can put it anywhere, and nautilus's Home link will redirect to the new place, if it is set in /etc/passwd.

It is called the user's Home directory, even when working from the Linux Command Line. All the directories under /home are called Home directories, they are grouped together for the sake of simplicity. Think of it this way: Just like /bin stores binaries, /home stores Home Directories.

So when Nautilus tells you the directory is "Home", it is literally "Your Home Directory", and therefore not a misnomer at all. It's the culture of Linux.

Another person pointed out that the $HOME environment variable is set to a user's Home Directory. The name for the variable has the same reason behind it as the name "Home," namely it's the culture.

Why is it the culture?

In an ideal Linux instance, everything the user does, all custom configuration, all documents, files of any kind, will exist inside that folder. It belongs to the user, it's in the user's Home Directory. That means the user can keep to himself, and makes knowing where your stuff is a bit easier. The computer kernel, programs, boot controls, all the stuff needed to run the computer, can go everywhere except inside the user-generated space, their home directory. Linux doesn't install any programs inside the home directory (third party programs might do this anyway), and there is always a system-wide configuration that a user could override if they want. The override configuration would be, of course, in their home directory. If you went from one Linux computer to another, and all you brought with you was your home directory, if the other computer [was set up to see you as a user, and] had the same programs installed, it would be almost as if you were on your original computer.

The HOME environment variable stores the path of your /home/<username> directory.

So when you are in /home/<username> directory(nautilus), its corresponding variable HOME is displayed.

A user's Home folder is, conceptually, their own personal space within the filesystem. It's the place where they can do (almost) anything they want without having to worry about messing up the system in general. Ubuntu puts most people's home folders as /home/[username] by default, but they can go just about anywhere in the filesystem. They can even be changed, though that isn't just a matter of dragging the folder to another place: you'd need to dig fairly deep into the system configuration to do it.

Ubuntu, Lubuntu, and other systems sometimes have their own names for this folder within their user interfaces. This is because, unlike Mac OS X or Windows, there is no single team that works on "the Linux GUI". In fact, there's no single piece of software that can be called "the Linux GUI". There are many different distributions derived from Ubuntu, but for many of them, the choice of which GUI they use by default is the biggest difference between them.

There is no single team that works on all of these GUIs: each one has its own. There are some standards that the different GUIs use to interoperate with each other, but there is no unifying standard for naming things like the home folder, so different GUIs do it differently. That's what you're seeing here.

Using a generic label for the home folder is beneficial to any OS that offers customer support.

Different label, same core concept. Home folder of user is /home/ and reference by environment variable: HOME. In general, there is a config file to setup it.

Not the answer you're looking for? Browse other questions tagged filemanager or ask your own question.

0
Change/set working directory of scripts executed from file manager window
8
How to run Dolphin instead of Nautilus?
30
Is there a Linux file manager with a proper drop-down tree view? (like finder in OS X)
1
Bookmarks in File, aka Nautilus only open home directory
1
How do I show the full folder path of open Nemo file browser windows when I right-click the Launcher in Ubuntu?
0
Nautilus not launching
2
Why is unzip in the file explorer so slow?
1
nautilus/nemo/other file manager - suggestions for more accessible GUI-based owner management?