How to configure an app to run on all desktop automatically

I'm running Kubuntu 14.04 and I'd like to have some apps to automatically be launched on all desktops and not only the current one.

As an example, I work on a dual screen and usually I have a Konsole open on my second screen, taking either the full screen, or half, or a quarter depending on what I'm doing. But almost always I want this Konsole to appear on all my four virtual desktops.

Another example would be the new Google Hangout for Chrome plugin with the latest Chrome (35.0) conversations are bound to the desktop you open them on, I constantly have to right click → Move to desktop → All desktops.

Is there a way to configure such apps to always run on all desktops ?

It seems that in the settings I could use the Window Behavior (personal translation, it may be called differently) panel to ensure that some app behave in a particular manner.

It could work for the Konsole example as the name of the window is consistently * - Konsole but for the Hangout one the window name is the person's full name. Any idea for this one ?

I don't use hangouts, so I can't comment on the specifics, but there are alternative ways to match windows in the "Special Window Settings" (in English). If you use the window's menu to access this dialogue, it should automatically populate these fields. You can try matching by window class or window role, if either has a generic enough match. 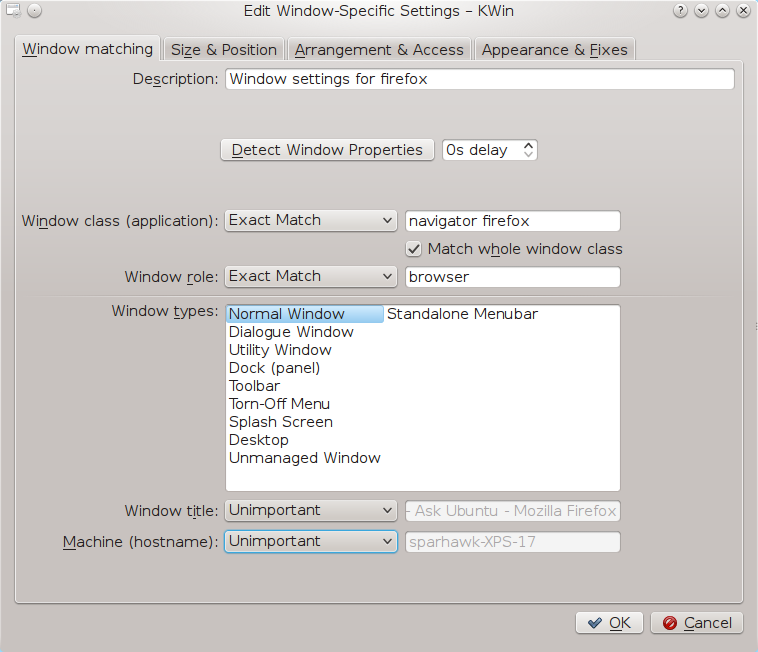 If the window in question doesn't have the window decorations for you to access the menu and window settings, you can still access the popup menu by pressing Alt+F3 by default.

If this doesn't work, then you might have changed the key binding. You can check the keybinding at System Settings > Common Appearance and Behaviour > Shortcuts and Gestures > Global Keyboard Shortcuts > KWin > Window Operations Menu.

Not the answer you're looking for? Browse other questions tagged kubuntu kde window kwin or ask your own question.

14
How can I make running emacsclient from the unity launcher reuse an existing emacs window
9
How to launch Configure Kde control module by command line?
33
How can I print-screen just one window and not my entire desktop?
0
kstart detailed description
1
How to make BOTH windows title and menu always visible on maximized windows (unity)?
3
Force Kate to open all files in the same instance
9
Opening Links from some applications takes a long time