How to output sound on Freebox Server/Player?

The french internet provider Free is providing AirPlay support for its two boxes (http://www.free.fr/adsl/freebox-revolution.html) the player and the server. By AirPlay I mean here, a way to output sound on either the server or the player from a computer using the local network.

The big picture of it works is not very clear to me, but it seems the protocol stack implemented on the boxes is the Apple Protocol (are there deals between the 2 companies, or is this protocol open, I don't know ?)

Anyway, using Itunes either on Mac or on Windows one can easily output the music being played on the Server or on the player by just choosing where to output the sound from a menu entry. It just work.

From Ubuntu software repositories, I installed pulseaudio-module-raop and I am now able to see my Player and my Server in the output list of the sound menu. Nevertheless, any of these two entry is working, no sound is outputed and my banshee starts to play song very very quickly. After digging into this problem if my understanding is correct, it seems that the protocol version implemented by the Free boxes is a newer one that is not supported by pulsaudio. I tried the following pulseaudio patch without success:

So my question is, does someone succeded into outputing sound from Ubuntu to a free equipement using AirPlay ? If yes, of course I am intersted in knowing how ?

Update: a screenshot of the output tab of the sound configuration panel showing that my two Free devices are discovered. Selecting any one of this output doesn't work and in Banshee for example when these outputs are selected music is played 5 time faster than normal time. 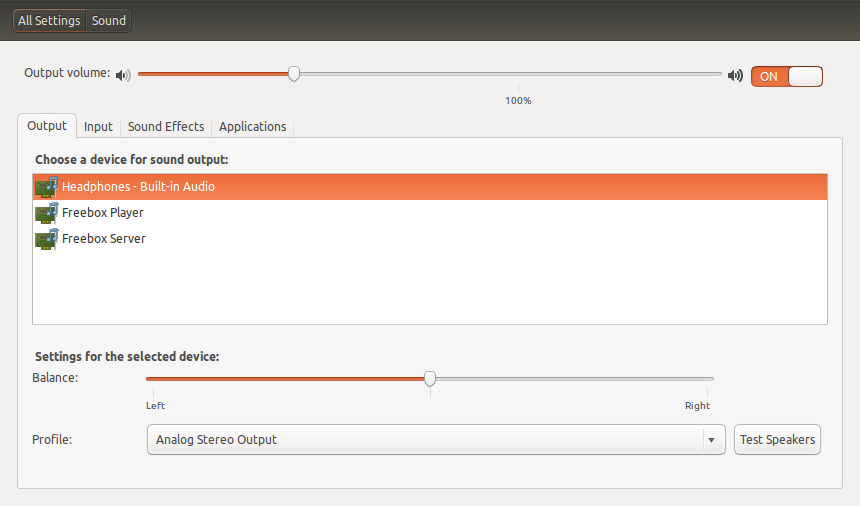 The Freebox probably makes use of Shairport/Airport Express 2nd gen. These only use UDP while Pulseaudio-raop is only capable of using TCP. It is a known bug and already existing for several years :( Please subscribe to the bug at launchpad to generate as much exposure as possible to get it fixed soon :D https://bugs.launchpad.net/ubuntu/+source/pulseaudio/+bug/951120

Not the answer you're looking for? Browse other questions tagged sound pulseaudio banshee or ask your own question.

11
How do I forward sound from one computer to another over the Lan?
0
Music not in sequential order with Banshee
7
"Failed to open audio output" error when trying to send audio from mpd to pulseaudio
9
How to set which output sound an application should use
5
Airplay from Ubuntu 14.10 to Speakers
1
Audio source not appearing in pulseaudio but playing over headphone jack
17
(K)Ubuntu 17.10 - No Audio devices found, no settings, no sound
1
Why does GNOME (Ubuntu 18.04) not recognise my sound output?
1
PulseAudio freezes applications when sound is required