When machine is headless, user is no longer privileged

The core issue is: ANY gnome session not sitting ontop of a real physical/native display --or shadowing that display (ie. NXserver's shadow mode)-- has faulty privileges. Even when run as root!

Any comments on a way to fix the problematic behavior for the VNC/non-shadow NX sessions?

I'm upgrading my home Ubuntu headless server after a long while, and I'm having lots of problems that I do not remember existing in previous Ubuntu versions.

While I was doing the testing/setting up with a monitor attached, everything was peachy, both when sitting infront of that monitor and when VNCing in from my desktop machine (into vino).

Without a monitor though problems arise:

The very first problem was vino being stubborn and not liking to load before/during GDM. But since this is a headless system, I dont really need it to start with X by default (ie change the init level) anyways, so that's a bit moot. However, I distinctly remember this being very easy to do in an older ubuntu version ( v9.04 I think ). And it worked fine; but not any more!? ... anyways I dropped that idea altogether.

Then it was Unity/effects messing VNC (Solved it by cheating).

I originally switched to NXserver hoping that maybe the following problems are tightvnc or vino issues, but no such luck. (Note: read round2)

When remoting in via VNC (or NXserver) my user account loses the ability to mount/unmount HDDs. 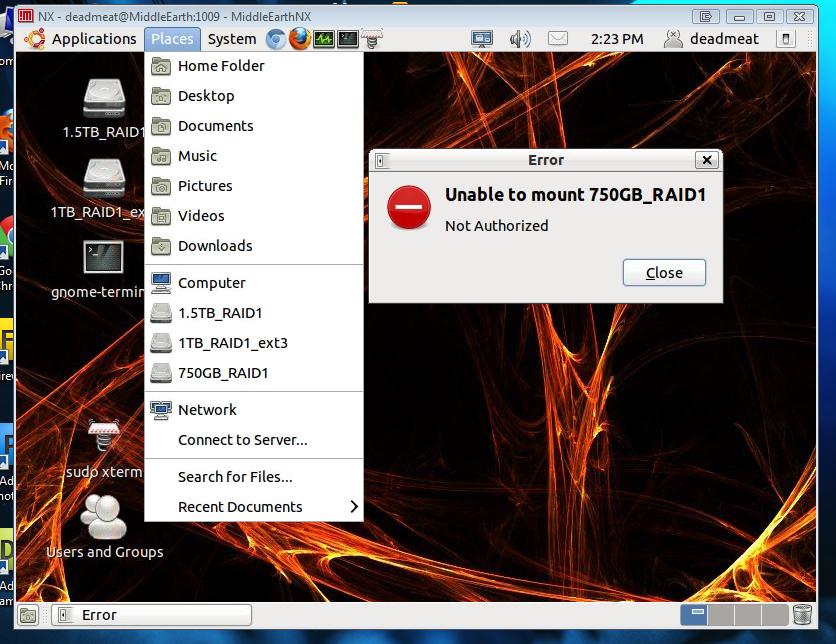 When remoting in via VNC (or NXserver) my user account cannot access some priviledged configuration options,
some examples:

I can only guess this has something to do with user privileges not being assigned properly when an actual physical monitor device is not connected.
The reason 'WHY' this happens in ubuntu 11.04, when it is headless, escapes me; I do not remember this behaviour in previous versions of ubuntu.

Do note that the HDD mounting problem is a non-issue for internal/static hdds (I just add them to fstab since they're static anyways). But really a big pain for removable usb media.

The rest of the problems, I have not figured out how to fix...
I know what you're thinking... log in to ssh, sudo su, and run vncserver under root entirely? 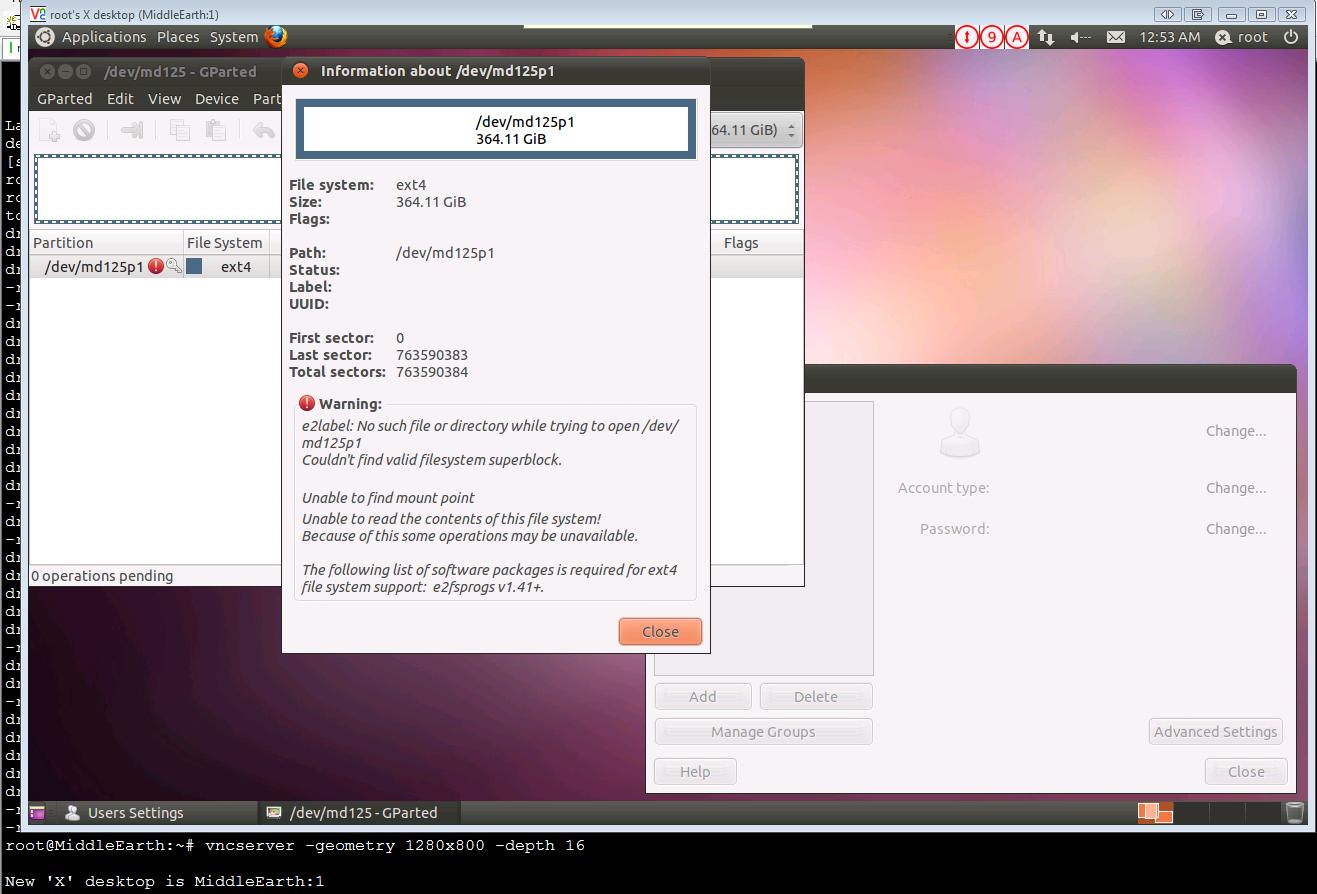 Surprise Surprise! root's gui is broken too: gparted fails to get info, user&groups is entirely grayed out (this is a different behaviour than my regular user). Weirdly enough the Login screen administration proggy seems to work fine.

( NOTE: I do not know if this did or did not make a difference to the outcome. At some point between round 1 and round 2, I applied the changes mentioned in posts #21 and #24 in this thread )

The regular tightvnc/NXServer sessions have the same behaviour, BUT...

In the NXClient connection settings, when I choose the 'shadow' mode (shadow attaches you to the native display, ie. desktop shadowing)...

Everything works perfect inside this session!

One thing I noticed is that it immediately asks me for a keyring password... maybe the whole mess has something to do with the keyring system gnome uses?

But, if I connect with a regular (not shadow) NX connection, or a regular vnc it goes back to having the same problems.

P.S. There were a couple of days inbettween when I wrote round1 and round2 (I was keeping it in a txt file locally). I was testing out various sugestions to see what would work, which is why I don't know for sure if that xorg.conf VNC device edit or that nomodeset setting made a difference.

At the time of writing I had set the system up to auto-login, which was why the shadow connection just simply worked. When I later disabled that and rebooted the system, NX gave an error, but with a little bit of Googling I found this thread

These are the uncommenting & changes I did on my /usr/NX/etc/server.cfg:

(If it was a more public network, ie university/large office I'd probably use a little stricter settings, but these suit me fine.)

After a reboot I logged in with nxclient to the desktop 'shadow' (native display) setting and got GDM! :D

I located the culprit.
Tested on a fresh install, confirmed it's a bug.

I submitted a bug report

In short the issue is: The polkit authentication dialogue will show up on DISPLAY :0 instead of DISPLAY :1 where the VNC/NX session is.

A workaround may be to use libpam-keyring to auto authenticate upon login.
or... scratch that, that probably would not do it, a change for all policy kit settings from 'auth_admin' to just 'yes' would probably fix the issue, and that of course would make policyKit moot altogether... sigh

I think this is the correct PolicyKit behavior.

As you can see, the user of type Any is limited with comparison to Active users.

To remedy, you can modify the default policy. In the following a suggest an awk script to create a policy kit file to put in the right location. This is the script:

Suppose you call it create-policy. Make it executable, the execute the script with

then move the resulting file:

You now should have the same right as you were a local session user.

I was running into a similar issue with NX and found the following thread:

Why do I get Unity instead of Classic when using NX?

I edited my Windows NX client so the desktop is set to Unix & Custom, then set it to run the following command:

And selected New Virtual Desktop.
After that I was good to go.

Not the answer you're looking for? Browse other questions tagged 11.04 vnc gnome-keyring headless nx or ask your own question.

17
Why do I get Unity instead of Classic when using NX?
2
How do I turn off effects so VNC can paint properly?
1
problems doing remote admin via ssh

3
Autostart of the xserver at boot up when the monitor is unplugged
4
Headless machine: Increase Remote Desktop resolution
1
Can't get VNC to work for multi-user Ubuntu 16 & 18 desktops (is there a better remote solution?)
2
X11VNC and Nvidia 390 headless; MATE not loading from login
3
Ubuntu 18.04 VNC/Vino stops refreshing when turning display off
1
How to get vino to run after autologin on a headless server - Ubuntu Server 18.04.2 LTS
3
VNC doesn't work with display switched off
0
How to get Gnome3's "Vino" (VNC Server) to start on login