Any ideas why this broke suddendly? I've upgraded from 12.04 to 14.04 in April and till yesterday the brightness keys were working fine.

The explanation is that ACPI adds its own back light control even if one is already present which is intel_backlight, adding this line forces CPI to use the Intel back light.

Basically it works creating the /usr/share/X11/xorg.conf.d/20-intel.conf file with the following lines:

I created a simply script:

The contents as follows:

This allows you to then run the following from the command line:

The values depend on your max brightness values which you can get by running:

I opted not to change the permissions of the brightness file and keep the sudo part for security reasons.

I have read A LOT of articles

Here is what I did, as I've been struggling with this for a long time...

Creating and modifying /usr/share/X11/xorg.conf.d/20-intel.conf file with the following lines...

I was using xbacklight option for some time, but it didn't satisfy me, as I knew it must be possible with Linux native way.

I've tried many GRUB options without effect, so I was googling again and again, coming back to solve this issue.

Today I came to the solution, which is following: 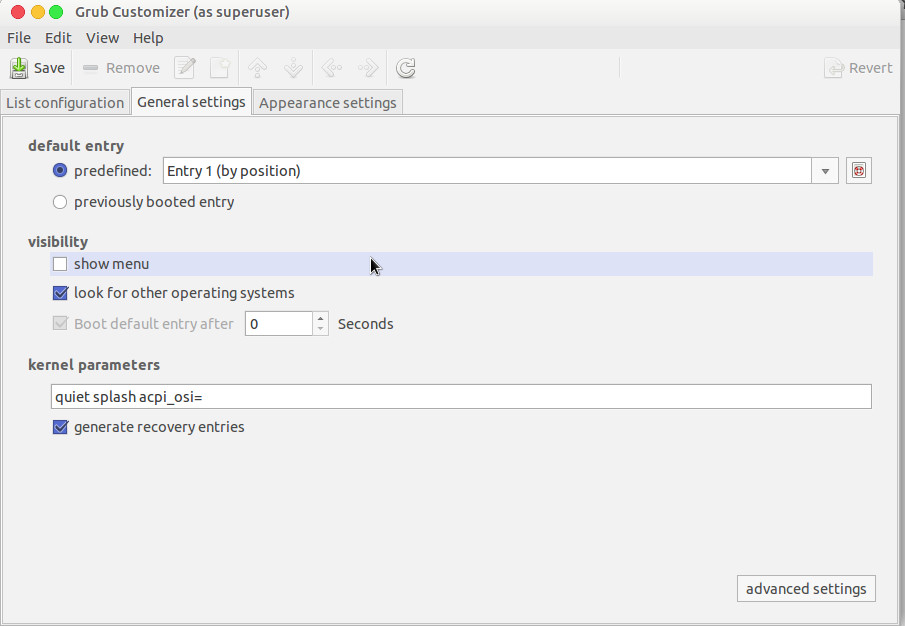 Funny thing is, that code is exactly the same as in /usr/share/X11/xorg.conf.d/20-intel.conf, but that way it worked as expected!

I used this solution, it's very simple and easy:

50 gave me the level of brightness I needed but you may need to experiment with the values for your particular system.

For me the solution was setting the line in the configuration file /etc/default/grub as following:

and then updating settings:

If t will not help you can try to turn off Legacy (CMS) boot option in BIOS.

Before I was trying:

It works for ubuntu 14.04 for me. Minimum brightness setting:

I found solution after years of searching and it's works very well.

I believe this answer applies only if the following two statements apply to your system. Please don't waste your time if these statements aren't true:

In this case your problem is likely to be because the system has added the acpi_video0 module incorrectly, and the brightness keys use this instead of intel_backlight (or your equivalent).

I gleaned this knowledge from this helpful page https://wiki.archlinux.org/index.php/backlight which states that "If you find that changing the acpi_video0 backlight does not actually change the brightness, you may need to use acpi_backlight=none."

This worked for my eeepc seashell series:

This is from http://ubuntuforums.org/showthread.php?t=1412922, and they got it from http://wiki.debian.org/DebianEeePC/Model/1005pe.

I had the same problem on my Lenovo Ideapad Z500.

I found this trick that worked on my Ubuntu 16.04:

In the GRUB configuration file /etc/default/grub modify the following line:

by adding this string: acpi_backlight=vendor. In my case I removed acpi-osi=linux and replaced, so, in the end it was:

and copy in it this text:

Save the file, and reboot.

Also you can try to use Fn brightness keys outside of Ubuntu (before it starts or in the BIOS settings). It could work.

Thanks to: ArchLinux - Samsung_N150_Backlight and Daria

I have a LENOVO with hybrid GPU, but I'm using just the NVIDIA card. Brightness buttons didn't work. The edition sugester elsewhere with a 10-nvidia-brightness.conf file didn't work. After reading a lot of, this solution, from Ubuntu users, worked for me.

For me, it pointed to intel_backlight. I don't know how this works for the acpi_backlight. I createad the file

Put your favourite text editor in <text_editor>, mine is xed.

The screen can dim (for example power-saving dimming) so it's definitely capable, and using brightness buttons operates the visual slider, so those are definitely recognised. But it was at full intensity and nothing I tried would control it.

I tried lots of other fixes I've seen here including: grub editing with acpi_backlight=vendor, installing brightness controllers, echoing values into backlight files, even tinkering with intel vs nvidia drivers in case that was the issue etc. No joy.

I came across this info on setting up my model (XPS 15 7590, OLED screen) with Arch Linux where the brightness was an issue there, and tried following that method: https://wiki.archlinux.org/index.php/Dell_XPS_15_7590#Backlight There was a script based on that (https://github.com/lurwas/oled-brightness-ubuntu) which looked helpful but didn't work for me.

Until I realised that in the ArchLinux page it mentions

Please note: If you are using the xf86-video-intel driver, you will need to replace 'eDP-1' in the script above with 'eDP1'

Sure enough, my system seemed to be looking for instructions relating to 'eDP1' and everything else was telling it to change 'eDP-1'. The dash made all the difference.

I set up that script as a start-up program, checking I had 'bc' and 'inotify-tools' installed as mentioned in the Arch Linux instructions (though note that page refers to 'itnotify-tool', and ubuntu required the 's' on the end to find/install it!) and made sure it had run permissions, and BOOM - "let there be LESS light!".

The script is run at start-up, and my backlight keys now actively change the screen brightness.

Hope this might be helpful, in case you have a similar underlying problem. I'm not sure if this fix is possibly just for an OLED-specific issue, so your milage may vary.

The packages require non-free to be enabled in sources.list.

I tried the options that yqbk mentioned, grub settings and xorg config, but none of these worked. I also couldn't read the correct brightness value from /sys/class/backlight/acpi_video0/{actual_,}brightness. After driver installation, the directory is gone and /sys/class/backlight/nvidia_0/ appeared in its place; now setting echo 10 > brightness works as expected.

It's technically NOT possible to adjust the default brightness of a standard terminal in Linux, but if it were possible to modify the /sys/backlight/*/brightness file, you could change the brightness.

Bottom-line: If you're looking to do about anything graphical or sound related on your computing device, look elsewhere beyond the purveyors of electronic diarrhea and the developers of open source operating systems such as Linux. Linux just "isn't there" in terms of a decent desktop multimedia experience. Everyone knows that, including Linus. However, if you're looking for a decent server experience, Linux may be for you.