Ask Question
Asked 6 years, 7 months ago
Active 6 years, 6 months ago
Viewed 2k times
0
This question already has answers here:
How do I resolve unmet dependencies after adding a PPA? (14 answers)
Closed 6 years ago.

i have tried installing gnome from repositories i.e. from ubuntu software centre but it shows this error while installing 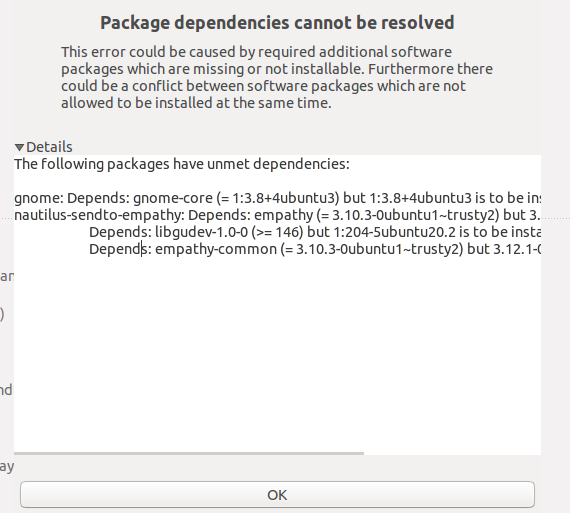 currently i am having AMD graphic card gallium 0.4 on AMD rs780 so can it support gnome complexities

There is no problem with the graphics card. Follow the steps below to see if it works this time. First, let’s add the GNOME 3 PPA to Ubuntu’s Software Sources. This can be done using a GUI but it is far easier to achieve using the command line.

Open a new Terminal window and enter the following command, entering your user password when asked:

With the PPA added and our package list updated we can move on to installing GNOME 3.10 itself. To do this run the following command, again entering your user password when prompted:

It can take a while for all the necessary packages and components to be fetched and installed, so try to be patient.

Midway through the installation a prompt will appear in the Terminal asking you to choose what display manager – aka “login screen” – should be used by default.

This decision is entirely up to you; both Ubuntu’s Unity Greeter and the GNOME Display Manager let you easily switch between desktop sessions (handy if you want to keep Unity or another desktop around) but only GDM offers GNOME-specific features such as lock-screen notifications.

When you’re ready to decide make your selection using the up/down arrow keys and hit ‘Enter/Return’ to confirm. The installation will then proceed.

If it does not work, run sudo apt-get -f install, then try the above commands again.

In case it does not work, install Ubuntu GNOME instead of Ubuntu. It is actually Ubuntu itself but with GNOME instead of Unity. It is also officially supported by Canonical. Note that this will erase all data from your existing Ubuntu installation. The link to download is below.

Not the answer you're looking for? Browse other questions tagged gnome 14.04 or ask your own question.

594
How do I resolve unmet dependencies after adding a PPA?