How can I keep a folder synchronized to an external USB hard drive?

I have a growing music collection which I manually keep in sync with an external USB drive. Sometimes I edit their ID3 tags, add or delete a file in either the hard drive or the USB drive, and I would like to keep those changes synchronized between both.

Does Ubuntu has something available that would help me with this scenario? Preferably something easy to use with a UI.

Update: To clarify my question, changes may happen on both the local hard drive or the USB drive, so the sync process must be on both directions.

Well, rsync is a great command-line tool for this.

You mentioned that you wanted a GUI, so I recommend Gadmintools which contains gadmin-rsync.

I know it's an old question, but, as it might be an answer for someone, I wanted to say I'm giving FreeFileSync a try, an opensource application bundled with another utility, named RealTimeSync. This last one triggers a command (presumably, FreeFileSync, but I believe you can actually execute any command line) whenever the contents of a folder is changed (or when that folder becomes available). I will update outcomes, but, at first glance, looks promising (despite the scarce and windows-oriented documentation).

Update: seems to work well. I set RealTimeSync to watch for availability and/or changes of two folders (source and destination) and run a Sync job when that happened, and all went well. Deletions propagated, too, with a (I think) nice feature: deleted files (those deleted by FreeFileSync as a result of the syncing) go to a folder inside trash (or inside a folder of your choice), named with FFS+time-date stamp.

Still have to test it under hard conditions (large syncing jobs, over a large amount of files) to check speed of file comparison. Will do tomorrow.

I think the best software for this situation would be DirSyncPro (V1.4). You can check their website here. This software is written using java, hence it does not have to be installed and is very portable. It has several features like backup, synchronizing files, mirroring drives and is a freeware solution.

It is under active development and you can guarantee to get new features frequently.The software is mature, stable and an ideal backup software. Give it a try without any hassle of installation.

I have attached a screenshot of the software below. 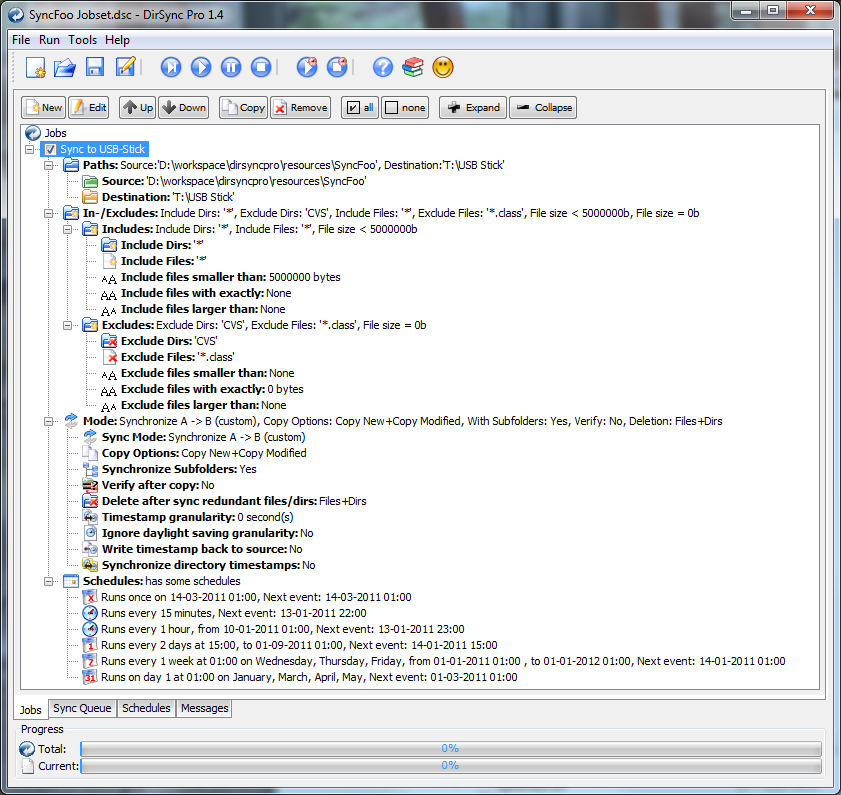 It works both bidirectional and mono-directional making it an ideal backup software. You can also schedule backups, create exception and save the job preferences thereby not having to create one every time you want to backup something.

I am just a user of this software, very impressed by its reliability and features that it possesses.

I usually use rsync in these scenarios; there is a GUI version called grsync but I don't know how easy it is to use.

Seems to be exactly what I am looking for and it has a big open source community behind it.