Ask Question
Asked 10 years, 7 months ago
Active 9 years, 11 months ago
Viewed 717 times
11
Closed. This question is off-topic. It is not currently accepting answers.

I have just installed Natty Narwhal replacing my Lucid Lynx system. I use GIMP so much, and found that in Unity, when opening GIMP (and actually any applications, I think), the windows placements are kind of less consistent compared to Ubuntu Classic.

I used to place the Toolbox window in the left side of desktop, the Layers, Channels, Paths, Undo - Brushes, Patterns, Gradients window in the right side, and resize the main window till it filled the gap between the both windows, and the windows will open in that position when I open GIMP.

However, things seem to work differently under Unity. When opening GIMP, the windows are always pushed to the right (looks like it is because of the launcher), even after I set them to fully occupy the desktop (over or alongside the launcher) and close it to 'save the configuration' before reopen it.

Are there any workarounds or solutions on this? I want GIMP to be ready to be used without having to move the three windows to the desired place right after it is opened.

As a result of this discussion, I was thinking a little about GIMP window placement under Unity. I do not disagree with the assertion that Compiz is responsible for the issue. However, after taking a slightly deeper look, this is what I found: 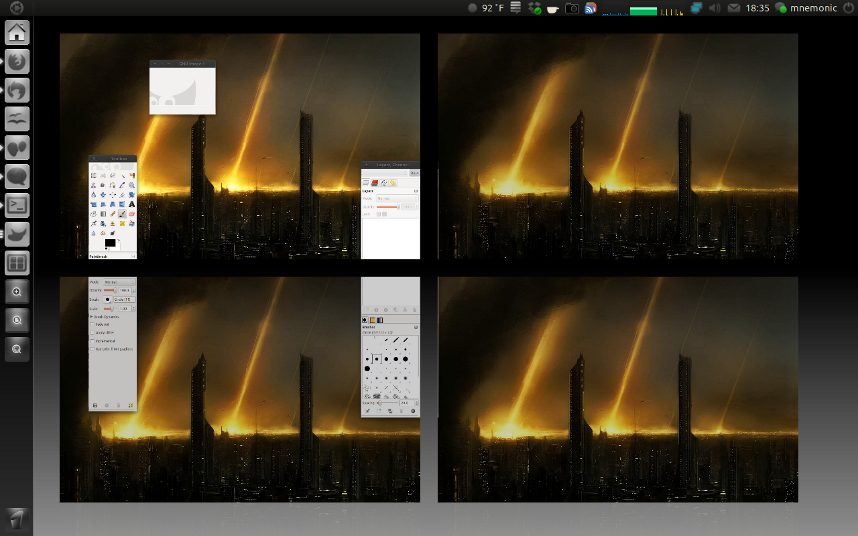 In light of the above pic, I am now curious to know how Workspaces are managed under Unity. It seems that is may be an issue with how Compiz's window placement interacts with the management of workspaces. Does this seem to be a reasonable way of looking at this issue?

Not the answer you're looking for? Browse other questions tagged unity compiz gimp or ask your own question.

1
strange Unity behaviour in fresh install
3
Can the Close / Minimize / Maximize buttons be pulled out of the Global App Menu when a window is maximized?
3
How to make Unity Launcher menu be almost always hidden and not influence window placement
1
Windows "jumping" between monitors when scale plugin used
7
Layer and toolbox window doesn't appear when I reopen GIMP after closing it using the launcher