If I add -f, it doesn't change the behavior. What is causing it to do this and how do I force it to download the package I want?

Based on a search, I can't even tell where it is getting the idea of tiff3

There is not a 1-to-1 relationship between binary packages and their corresponding source packages. Reasons for this include:

I am not able to reproduce your specific issue, maybe because I have a newer version of Ubuntu installed. Below is a walk-through of a similar issue with a similar library (note that everything in my example is already installed, but the displayed information about mapping and dependencies is still relevant). This should give some good hints about how to deal with this type of issue.

I have successfully installed a package called libjpeg8:

I try to get the source, but it is remapped to something with the suffix -empty.

I list the dependencies of the desired package, and notice libjpeg-turbo8:

I install the source for libjpeg-turbo8, and I get the source that I needed:

Make sure you have your "Source code" entry check marked in "Software and Updates". 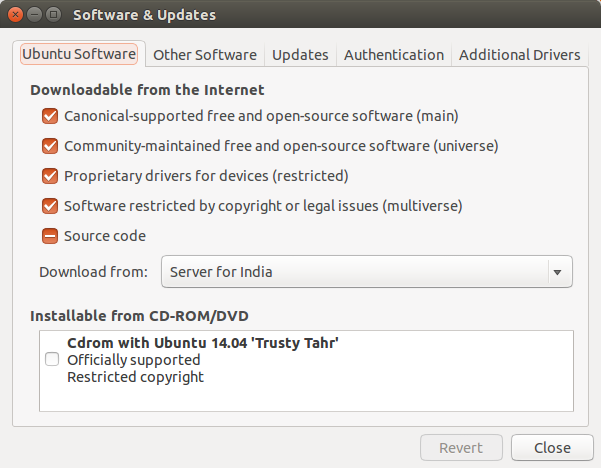 If not, check mark it and and open a terminal and:

(you probably don't need to do this, if you get a dialog box asking you to reload the package list after you have check-marked if if was not) and then do:

to fetch the source code for libtiff4.

11
Dependency is not satisfiable: libtiff4 when trying to install Lightworks on Ubuntu 14.04

2
apt-get fail with "Unpacking replacement diff"
4
Force apt-get to ask all install questions again?
4
What's the official method for checking integrity of a source package?
0
OpenCV is not installing
1
What is "Automatic Source" in depcache.cc in the source code package of apt?
0
Linking error building OpenCV Contrib 4.5.4 with LibTiff4