I want to convert a DJVU document into a PDF document, separating and preserving the text layer and the images while also keeping the structure from the DJVU. How can I do this in Ubuntu?

(I will then be using Calibre to convert to ePub/Mobi, so if there were a Calibre plug-in for this entire process that would be perfect for me!)

Note1: Printing from Evince, exporting from DJview, or anything using the package ddjvu, are not adequate solutions as they discard the text layer, saving only images.

Note2: Using DJVULibre seems to only extract the text layer and pictures are not extracted. Similarly, copying the text "manually" loses the both document structure and the pictures.

Simply use DJView and export as PDF

There is also an online converter DjVu to PDF converter

Here is one way, which would require some not so common tools:

We can use djvu2hocr command (from ocrodjvu package) to extract hidden text layer from DjVu file (it doesn't do any OCR or similar, it just extracts text layer with geometry), i.e.:

Now we extract DjVu page to TIFF format with:

so that we end with these file in out work folder:

This is where pdfbeads comes in play, and we simple execute:

then this nifty program takes care of everything that's inside this folder (HTML and TIFF files with same base name) and produces output PDF file with some by-products:

which is identical to input DjVu file and has text layer inside: 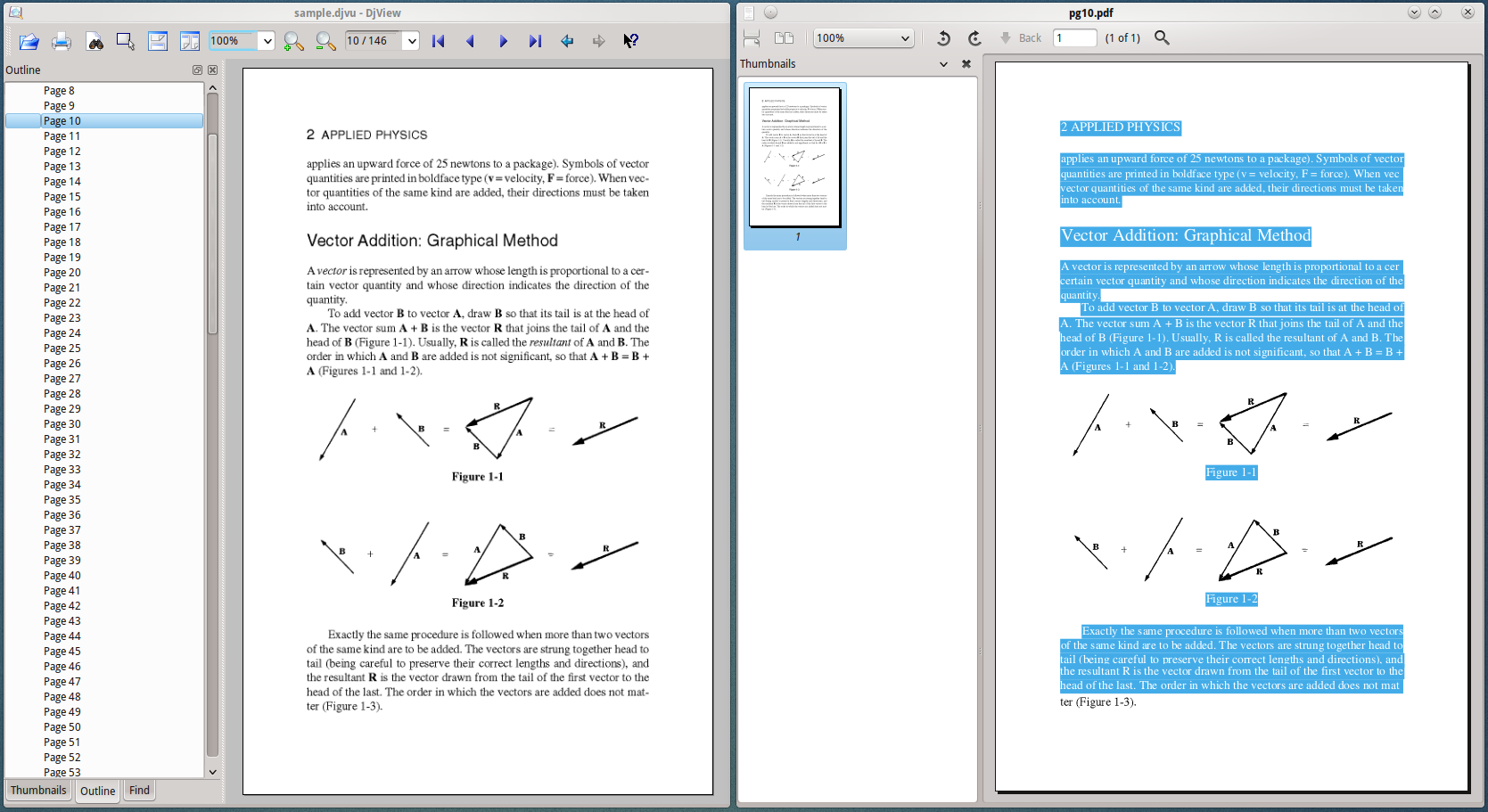 Lengthy comments below discuss representing smaller images from DjVu document page as separate objects, which is not easily possible because DjVu document page is itself just a single image with optional text layer, with no "information" about smaller images as separate objects. If DjVu document has color images, then they'll be usually placed on background layer; in this case user can take advantage of tools like ddjvu (extract only background layer) and imagemagick (auto-crop) to output just images instead whole canvas, but it can't be automated for creating PDF output

Another saner, but slower approach is use of regular OCR GUI tools. gscan2pdf (> 1.0) is suggested as possible candidate for Linux PC

There is djvu2pdf but it relies on ghostscript so it might be another printing option. I still suggest you give it a look, just in case it's more clever than I'm giving it credit.

It's not in the repos but you can download a deb from the makers' site: http://0x2a.at/s/projects/djvu2pdf

Using DJVULibre, one can extract the text layer via the terminal command:

(both do the same thing, and were found here)

Formatting requires some effort (as many symbols are not converted properly) and pictures are not recovered.

I made a script of @zetah's answer.

http://www.djvu-pdf.com/ - Using this website you can convert djvu to pdf.

The easiest way: use gscan2pdf to import the djvu, then OCR it with tesseract, and finally save it as a pdf. The OCR'd text in the pdf might be slightly different from the original djvu, and the conversion may take a while, but this method is a no-brainer and it works.

Not the answer you're looking for? Browse other questions tagged pdf ebooks convert djvu or ask your own question.

11
How to bulk convert .djvu files to .pdf?
2
pdfbeads will only output a single page
1
converting djvu to pdf trouble with this OCR preserving code
1
Problem installing a ruby gem on Ubuntu 16.04

3
Bookmark pdf and djvu files
1
How can I print to DjVu file as we do create PDF?
1
converting djvu to pdf trouble with this OCR preserving code
8
Why won't .pdf files containing transparent elements print correctly?
1
Comment & Highlight the PDF & DJVU files?