I'm having a few usability issues with the Unity Launcher. I'm using 11.04 with the Auto-hide feature activated.

When I go to close a window (or press the back button in a web browser) that is tiled on the left of the screen, I often activate the launcher which then covers the close button and the back button on the browser. Of course I could approach the back or close buttons slowly from the bottom and thereby avoid hitting the top left of the screen and activating the launcher. However, I have evolved the habit, presumably because it is more efficient, of doing the gross mouse move up to the very top left of the screen, and then the nuanced smaller move down to the close or back button. I think this is a standard principle of mouse movement in human-computer interaction.

Below is a screenshot of what I see, when my mouse goes slightly too far up and activates the launcher and hides the back and close buttons, which I was intending to press: 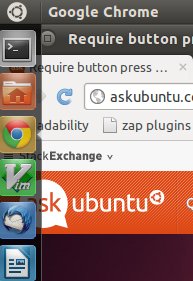 Thus, is there a way of making the Unity Launcher only show in response to a button click?

I think the "launcher" settings only allow a choice of the side + corner or just the corner.

You should go to compizconfig settings manager (install ccsm if you don't have it), then go to unity's submenu and find the "reveal mode" (first thing on the first tab, can't miss it)

Not the answer you're looking for? Browse other questions tagged unity launcher usability or ask your own question.