Can't get Mouse back in gEdit after Shift Key Is Pressed

By default when you type in gEdit, mouse disappears and you can get it back by moving your mouse. So, you can do whatever you want using your mouse.

But when I press Shift or Ctrl or Enter and move the mouse to get the it back on screen, it won't work. The mouse will be shown when it's moved and suddenly disappears. So, I can't do any actions using it. This is a very weird bug. To get back the mouse, I have to right click on the editor.

Is this a known bug? How can I fix it? Has only gEdit (version 3.10.4) have this bug? Should I downgrade it to lower version?

I've tested this on leafpad Text Editor and this problem doesn't exist there.

When you're typing for a while (like 30 minutes or more), sometimes gEdit won't allow typing anymore, but you can save the file and do other stuff. There won't be any cursor to make it normal again, you have to close the gEdit window and start new one.

As far as I tested, this "new gEdit" is way too buggy.

Is there any other lightweight (or not) text editors like gEdit with code markup and other stuff ?

When gEdit is ran in root (gksudo gedit), this bug doesn't seem to exist. So, why does this bug occur in normal user and not in root ?

This bug has not been fixed and I decided to switch to another text editor. I found Geany and it's great. It does not have the bug like that on gEdit.

So, I guess the solution is to switch to a new text editor until (or not) this bug is fixed.

As reported by August Karlstrom, The gEdit mouse bug was fixed when I disabled IBus as the default Keyboard Input System. Here's how you can disable it :

Open a terminal and do the command :

A window named Language Support will open up. In the window, change the Keyboard input method system option to none instead of IBus and close the window. 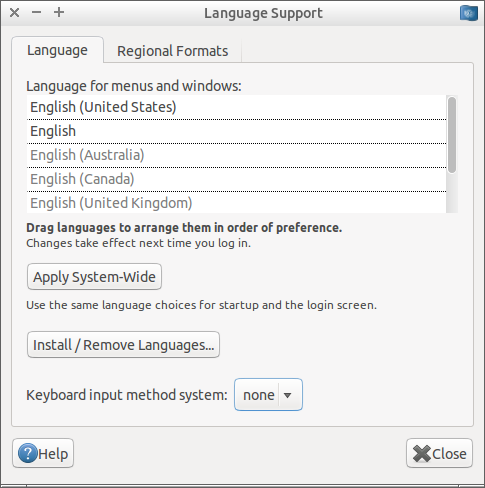 The changes would only take effect after you restart (reboot) your computer.

And open again your session.

Not the answer you're looking for? Browse other questions tagged keyboard lubuntu 14.04 mouse gedit or ask your own question.