Users and Groups Administration tool - What do the options in User Privileges tab of Advanced Settings do?

How does the "User Privileges" tab in the Advanced Settings of Users and Groups GUI work? I mean this window: 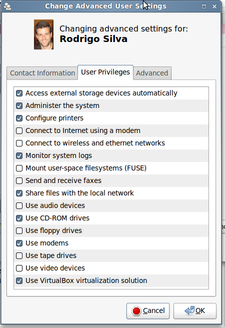 Does it simply add or remove the user from certain groups, or is there something else? If so, why only a few groups are represented there? I mean, how does Ubuntu/Gnome/Whatever decide which groups appear in that list? And where does the "description" for each "privilege" comes from?

As a side-note, Ive always been amazed of how incredibly terrible this GUI is: documentation is laughable, to say the least (click Help and see: only 3 pages, very outdated screenshots, obsolete and incomplete instructions, and not a single word on the Advanced Settings at all), also the design is completely counter-intuitive: theres no list at all of the groups a user belongs to. One must click "Manage Groups" and click properties for each and every group to see its users. Come on! How come such a major and ancient thing like Users and Groups Management still have no decent GUI?

gui users privileges
Share
Improve this question
asked May 28 '11 at 10:03

After some research, I answered my own question... Ill post here for reference, may help people with a similar question in the future:

Ive downloaded and studied the source code from gnome-system-utils package. The app itself is users-admin. And the short answer is:

Yes, this tab is only about adding and removing the user from certain groups.

There are some checks, for example, when removing the user from the admin group, that triggers a warning about if the user is the only administrator in the system, and prevents from revoking this privilege. But, basicaly, each "privilege" in the list is just an alias for a group. It makes sense, since security and privileges in Linux are closely tied to a user belonging (or not) to certain groups.

But not every group is represented in the Privileges list, only a few. And, believe it or not, the list is hard-coded! Groups and description strings!

Below is a list from all the groups represented in the privileges list, as of Linux Mint 10 (= Ubuntu Maverick 10.10 in that sense). The groups names and the descriptions shown in the list are taken directly from source code, file src/users/privileges_list.c. The explanation about some of them (when descrition is not self-explanatory) are taken from this blog (a bit outdated) and /usr/share/doc/base-passwd/users-and-groups.html (definately obsolete)

A privilege is only listed if its correspondent group exists in the system. So the following does not show here since Ubuntu do not create them by default: cdwrite, powerdev , proc, scanner, usb, video and wheel.

Groups vboxusers (and perhaps sambashare) are only created when you install that software, giving a false impression that this list is configurable and not hard coded.

Thats kinda weird, since I can use my CD/DVD Writer, USB ports, Hibernate, Audio and Video just fine. Maybe these are obsolete groups from Debian not used by Ubuntu? Well, then what is tape doing there?

Update: Video groups seems related to using the framebuffer driver for direct video access and graphic modes. As it turns out, non-root users are not allowed to use video graphics, the Xorg X server is, and the Desktop Environment, such as Gnome/Unity/KDE, use the X server. As such, /usr/bin/X is setuid as root.

I guess this is similar with usb, cdrom and other block devices: a regular user can only indirectly access those devices configured via udev.

Not the answer you're looking for? Browse other questions tagged gui users privileges or ask your own question.

12
How do I disable usb storage?
3
Differences between first (initial) user and other users?
2
Difference between admin/normal accounts except the right to use "sudo"?

0
Users and Groups No Save Button
153
How can I display all users and groups with a command?
2
Shell script for list of users by groups
1
User Groups and Advanced Settings in 15.04
0
Membership of which group grants a user access to udisksctl?
5
Relationship between file/folder's owner and group?