I have been using the GUI (right click => compress) to try and compress a .tar containing 3 videos totalling 1.7gb (.H264 MP4s). gzip, lrzip, 7z etc. all do nothing to the file size and the compressed folder is also 1.7 gb.

I then tried running lrzip from the command line (in case it was a gui problem), and used the -z flag (extreme compression), and this was my output. 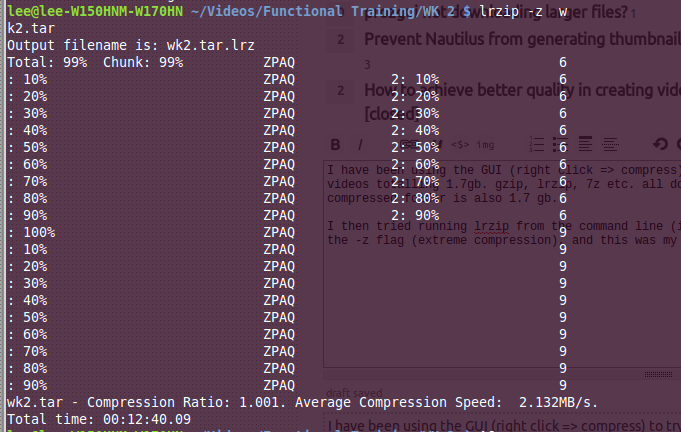 As the compression ratio shows, the actual size of the compressed folder is bigger than the original! I don't know why I am having no luck, lrzip in particular should be effective according to random reviews I have read and the official docs (files larger than 100mb, the larger the better) - see https://wiki.archlinux.org/index.php/Lrzip

Why can't I compress my files?

As @pram said above in the comment, mp4 videos are already compressed, and other video formats probably also use compression to some extent. Therefore, trying to compress them won't result in little (if any) reduction in size (this also applies, at least in part, to pictures and music). In this case, it looks like the metadata (for the compressed file itself) might be causing the increase. The only compression format that might (and that's a strong might) result in some reduction is xz.

On another note, if you want to reduce the size of those videos, look instead into re-encoding the videos using something like Handbrake.

Really, the fact that the files are already compressed is not the crucial problem. It's this: compression in general can only work if the data has some kind of redundancy in it. That's practically always the case for uncompressed files – however, it's not necessarily obvious what the redundancy is. General-purpose compression algorithms mostly target the kind of thing obvious in text files: many words turn up not just once but plenty of times in identical form, perhaps phrases of words can be combined, etc. etc.. The algorithms are quite good in generalising this to anything from ASCII-encoded phone number lists over chinese poetry to binary machine code, but they can't possibly work for any kind of data. In particular, media files are conceptually analogue data, in a noisy digital representation. That means, there's not really any of the kind of textfile-reduncancy at all: some motives might be recurring, but always with a slightly different configuration of sensor noise. That's why all compressed image/AV formats use some cleverly chosen transformation as their first encoding step, normally based on DCT or wavelets. These transformations roughly speaking move the picture-portions and noise-portions into different locations, so they can well be seperated and with lossy compression you retain only the information you think is most "important", which does not include the noise, while the "good information" has lots of redundancy. (That's not really how it works, but sort of.)

If general-purpose compressors used these transformations, the effect would be the opposite: most digital information would actually be misclassified as some kind of noise, because it lacks the "smooth" structure you find in analogue signals. And after lossy video compression obviously neither analogue smoothness or digital recurrence can be found anymore (if it were, the codecs would use another bzip-stage or something themselves!)

The reason you're having no luck is that mp4 is already compressed, you can't compress it further. All you are doing is adding the compression format's header information to the file.

Since the files are already compressed and you can't compress them further, this results in an increase in file size since all you're doing is keeping the same information and adding a few more bytes of header info.

This is a nice example of the pigeonhole principle.

Since the file is already (lossy) compressed, there's little to no reduction to be had anywhere, which means that you're already at zero net gain. As the others mentioned, the compressed format itself has a certain, usually negligible loss in in its own meta-data. All of this comes together means that there is probably no pigeonhole left in the set of equal or smaller files and thus your compressed data falls into the set of larger files.

If you want to compress these files you will have to reduce the quality.

Without knowing how long and what format and content type these files are its hard to tell if these files have room to be shrunk without much visible quality loss.

BluRays with 1080p video tends to be upwards of 25GB so its not unlikely you're already at an optimal quality-to-size ratio for H.264.

You can try using ffmpeg or avconv to convert files.

You could start with ffmpeg -i input_file.mp4 -preset slower -crf 20 -c:a copy output_file.mp4

The anconv command will work similarly.

Not the answer you're looking for? Browse other questions tagged gzip or ask your own question.

1
Compressing big files into several files ubuntu
2
Does gzip hold any cache in memory or a temp file?
0
Recover Huge and Broken Gzip file
7
How to create a zip file from contents of a folder with certain name pattern?
5
Confusion between archiving and compressing?
2
How to open large file with extension .v2.gz?
3
gunzip redirection to /etc/: No such file or directory
19
How to uncompress a .bin.gz file?