Can I install Ubuntu/run Ubuntu live CD on an iMac G4 PowerMac6,1 without access to OS X

I have an iMac G4 PowerMac6,1 which has already seen some years and I would like to install Ubuntu on it (any version) by overwriting the current OS X installation which I can't and don't want to access in any kind of recovery mode or something (no passwords and no intention to get in touch with the system). Is there any change I can get into an Ubuntu live session or a more rudimentary form of installation (the really prefer the former in order to be able to make a dd backup of the disk easily)?

boot device selection menu appears in some cases, in others not, but USB stick is never listed (only the primary hard drive).

I know that there're a lot of solutions for installation with access to Mac OS X (e.g. with creation of USB stick on Mac)!

Update (after @BlottoBot 's answer): I tried Ubuntu 12.04, 13.04 and Lubuntu 14.04 with PowerPC architecture from CD or DVD and it got recognized at boot. Unfortunately it gets stuck after. As recommended in the boot screen it tried both 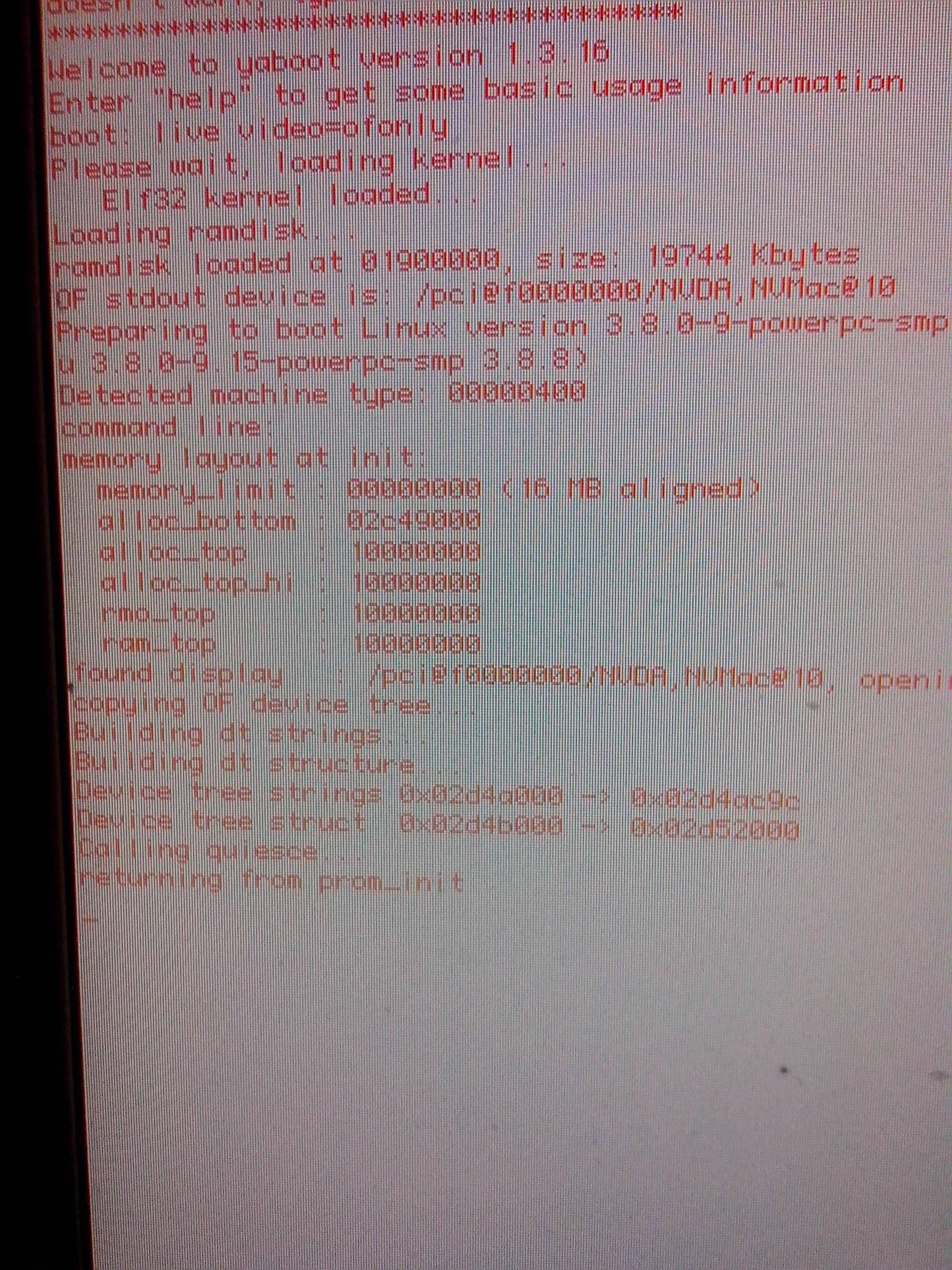 Update 2: Ubuntu 14.04 Server with PowerPC architecture works, i.e. gets beyond the white loading screen (with a blinding yellow screen). What could that mean? Can I - after installing from 14.04 server live CD - install the packages I would have gotten from a desktop live CD by installing e.g. ubuntu-desktop?

Update 3: I can boot from an USB stick with Lubuntu 14.04, but the behavior is the save as for the live CD (which screen), I also tried custom boot command live video=radeonfb:1440x900-16@60 from the ubuntuforums.org thread, but it doesn't work (because I don't have a Mac Mini, maybe someone knows the right boot command for me).

I'm a bit late, but none of the images from that page will boot on a G4 iMac. You're using discs for the wrong architecture. All iMacs (G3, G4 and G5) until the Intel transition (en.wikipedia.org/wiki/Apple%27s_transition_to_Intel_processors) used a PowerPC processor, which has a completely different architecture from both i386 and AMD64. If you wish to install Ubuntu on a PPC-based computer, you will need to use the community-supported Ubuntu version from here. You can find instructions for USB-booting the G3 slot-loading iMacs and beyond from here. Hope this helps.

Not the answer you're looking for? Browse other questions tagged usb system-installation mac or ask your own question.