Ubuntu 13.101 (and maybe upstream gnome) introduced very annoying bug: pressing keyboard layout switch shortcut makes focus go away to some system window, then back to window where shortcut was pressed. Some applications have some actions bound to change of focus, for example twitter (in browser) closes reply text input field when losing focus, etc. So ubuntu's native keyboard switcher isn't suitable for me, until fixed.

X has builtin switching mechanism, and it is much better, in addition to that it does not involve focus switching, it switches immediately (gnome switcher also sometimes lags).

How can I set up xkbmap options so settings will remain after reboot and will not be reset by Gnome?

But it works only:

Another option is to add following to xorg config:

Xorg understands that during startup: 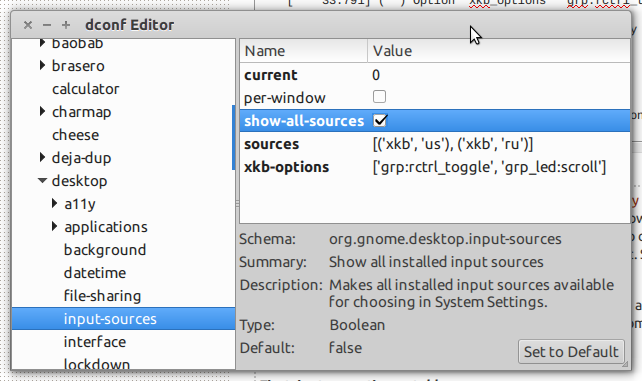 I have xkb-options and sources set in org.gnome.desktop.input-sources, but Gnome still sets xkb to single English layout:

Fourth, another option in gconf 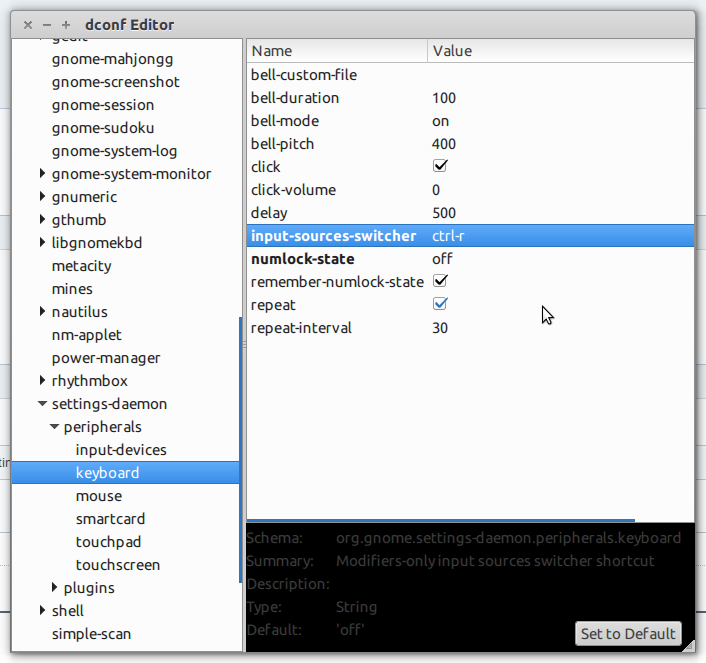 Setting org.gnome.settings-daemon.peripherals.keyboard also does not work for me. Nothing changes.

Upd 1: There is discussion recommending to remove /usr/lib/gnome-settings-daemon-3.0/libkeyboard.so. At least this fixes some resets of xkbmap (i.e. after lock screen).

1 I use 14.04, but problem with losing focus is still not fixed. (Unconfirmed report in upstream Gnome)

To prevent gnome resetting keyboard setting in X i use this command:

I've been going nuts over this just like you, but with Ubuntu 14.04 (LTS), Xubuntu, xfce 4.12 and xkbd (from xfce goodies). Ctrl+Space to change the keyboard layout worked, but Alt+Shift didn't (modifier-only keys).

You're done! Use Alt+Shift to change keyboard layout.

I just read this article on screenlocking, which may be related. According to the article, screenlocking has the intended consequence of blocking input devices and manipulating locales. Seems like you have a few options:

There is an interesting discussion of this and related events which can be found on the ubuntu-dev mailing list: https://lists.ubuntu.com/archives/ubuntu-devel/2013-November/037768.html

this workaround worked for ubuntu 14.10:

p.s. new version of gxkb has appindicator for ubuntu. can be installed via ppa:zen-root/gxkb-stable

But it works only:

Well as far as Gnome "resetting" it i dunno. I do know how you can get to stay every reboot though as I had to do the exact same type of thing for my Logitech mouse. It has multiple buttons which I wanted remapped a certain way and I had to have that set at restart.

So what you do for that is create a text file. Then in that text file type:

and right below that put in your commands. As example my mouse looks like this:

next you would save that as whatever name you want and move it to some place like your home directory. it has to stay there "forever".

then just open up your Startup Applications and Add the file to your startup and then you dont have to worry about it lasting only for the session. it will be ok to reboot your computer because your settings will come back through the file you just added.

Not the answer you're looking for? Browse other questions tagged unity 13.10 gnome keyboard-layout 14.04 or ask your own question.

277
How do I remap certain keys or devices?
9
What file is the setxkbmap option -rules meant to take, and how can I add keyboard variants to that file?
12
Configure Caps Lock as AltGr and Arrows like in vim
13
How to change the abbreviations of layouts shown in keyboard layout indicator of GNOME panel?
9
Switch language shortcut bug [ubuntu 14.04 Gnome]
16
(alt) and (super) keys suddenly stopped working in gnome 3
2
xorg.conf keyboard layout lost when window manager starts
0
Caps lock now used to switch languages (I can't get rid of it)
1
User xkb changes not permanent
0
Remaping Keys in Ubuntu 17
See more linked questions