How do I route my internet through a SSH tunnel?

Old Q How do I setup an OpenVPN server without root privileges?

Is there a way to setup an OpenVPN server without root privileges? E.g. with configuration files in my home directory? If yes, how do I set it up?

I'm trying to SSH into a system and set up an OpenVPN server over there for personal use.

Since it's apparent that OpenVPN needs root privileges, I am changing the question to routing my internet using SSH which I can easily set up.

sshuttle is a transparent proxy server that forwards over a SSH connection and sets up a proxy by running Python scripts on the remote server. sshuttle can be run under the following conditions:

from the Software Center or the Terminal:

The basic command for running sshuttle with routing all traffic is:

Upon the execution of the command, a sudo password prompt will appear and subsequently the password to SSH account. No other details will appear except for a short message and return to shell upon failure. For more status messages, run sshuttle in verbose mode with the -v flag.

In this example all internet traffic except DNS is routed through the VPN. -r flag denotes the remote hostname and optional username and port that follows in the above example. 0/0 is short for 0.0.0.0/0 that represents the subnets to route over the VPN. The usage of 0/0 routes all the traffic except DNS requests to the remote server. DNS tunelling is possible with the usage of -H flag.

Please read the man page (man sshuttle) for the details of options and modes under which sshuttle can run. For information about the concept and more examples, refer to the project page.

You cannot setup OpenVPN without root privileges because certain operations requires it.

Depending on your needs, other solutions are available. For browsing through your server, you may set up a SOCKS server.

Setting up a SOCKS proxy is not difficult: it's built-in in OpenSSH. To enable the SOCKS server, run the next command in a terminal:

Replace 1234 by your preferred port. In your browser, you can enter localhost as host and 1234 as port at SOCKS4/5 server.

Below is an example in the Firefox browser: 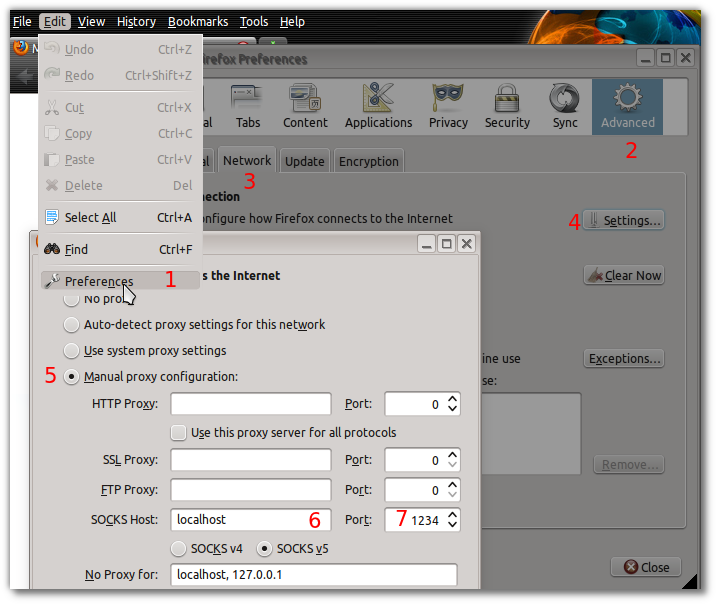 If you only want to tunnel your systems TCP traffic i recommend to use a programm called tun2socks. If you also want to tunnel UDP traffic you have to install udpgw on your server.

Here is an tutorial how to install and use this programms: http://board.nwrk.biz/viewtopic.php?id=3

6
Route all traffic through SSH tunnel or equivalent?
1
Bash Script to set "system wide" proxy settings
81
What is a terminal and how do I open and use it?
31
How do I setup OpenVPN so I can securely use the internet from an unsecured hotspot?
10
How can I autostart a SSH -D tunnel at login for a SOCKS proxy?
0
How to tunnel traffic to certain destinations over ssh?

0
Browse internet through another host without having external public ip on any host
4
From WAN, VNC fails to connect through ssh 5900 tunnel if not also proxied locally
1
Ubuntu Server 15.04 how to login using ssh?
4
If OpenVPN crashes or loses connection, can it revert silently to the default route?
0
Moving ssh keys to a root-owned location