Should Ubuntu's battery icon warn me that my battery is on its way out? [closed]

I'm using Ubuntu 13.04 on an older Toshiba Satellite and for a while now, the battery has done nothing but drain.

I knew when I got the laptop that the battery would need to be replaced within short order, so it's not a surprise - however, I've been watching it steadily fall from 100% to hold steady at 6% for weeks, with no apparent warnings from the OS.

Today it sits at a pithy 1%. No aspect of the Power Statistics window (clicking the "Battery: 1%" option under the Battery icon) indicates that something somewhere might be Out Of Whack.

As I said, I had anticipated that I'd need to replace the battery soon, but I also figured I'd get some kind of note from Ubuntu that there could be an issue. If I didn't have the power icon on my menu, and I did not realize the history of the laptop, I might not have noticed that this was even happening.

Did I simply miss a preference somewhere, or is this a genuine issue?

EDIT: Indeed per the accepted answer, installing and using acpi outputs the following:

UPDATE: It turns out the question was misread. Perhaps I was unclear in my asking, as well.

To be clear - I don't necessarily mean a giant popup stating "BATTERY OVER" or anything; however, it seems not-entirely-unreasonable to expect the output from the battery indicator to say "Not Charging" if the battery is, well, not charging. At present it simply says "Charging (1%)", when clearly it is not.

I'm not the sharpest beer in the shed, but I can tell when my battery is slowly degrading over time. However, admittedly, I only knew that the slow death had begun because the light on my laptop that indicates the battery is charging no longer came on. I then noticed that Ubuntu's indication that the battery was "Charging" was incorrect.

I know that Windows will at least modify the visible icon to show that there is a charging issue with the battery. This is what I mean by "warning" - I don't think I need a big popup, but even just a battery with a :( next to it would be a pleasant indicator that something is borked.

And here again, a popup which clearly states that it is not charging. 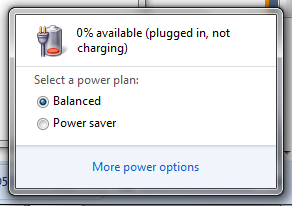 Again - I can put 2 and 2 together to suss it out for myself, but it 'feels like an oversight', and I wanted to ensure that there was not a preference or setting that maybe I inadvertently turned off that was preventing me from seeing said icon in my laptop window.

So did I in fact do this to myself, or is there a separate issue at play?

Browse other questions tagged 13.04 battery toshiba-satellite or ask your own question.