From what I understand LVM allows me to

resized and moved around almost at will ~ from here

Then I thought, with the usual partitions, I can also resize them? Perhaps with LVM I can have 1 Logical Volume span multiple disks?

Also the default LVM Setup in Ubuntu is abit confusing ... 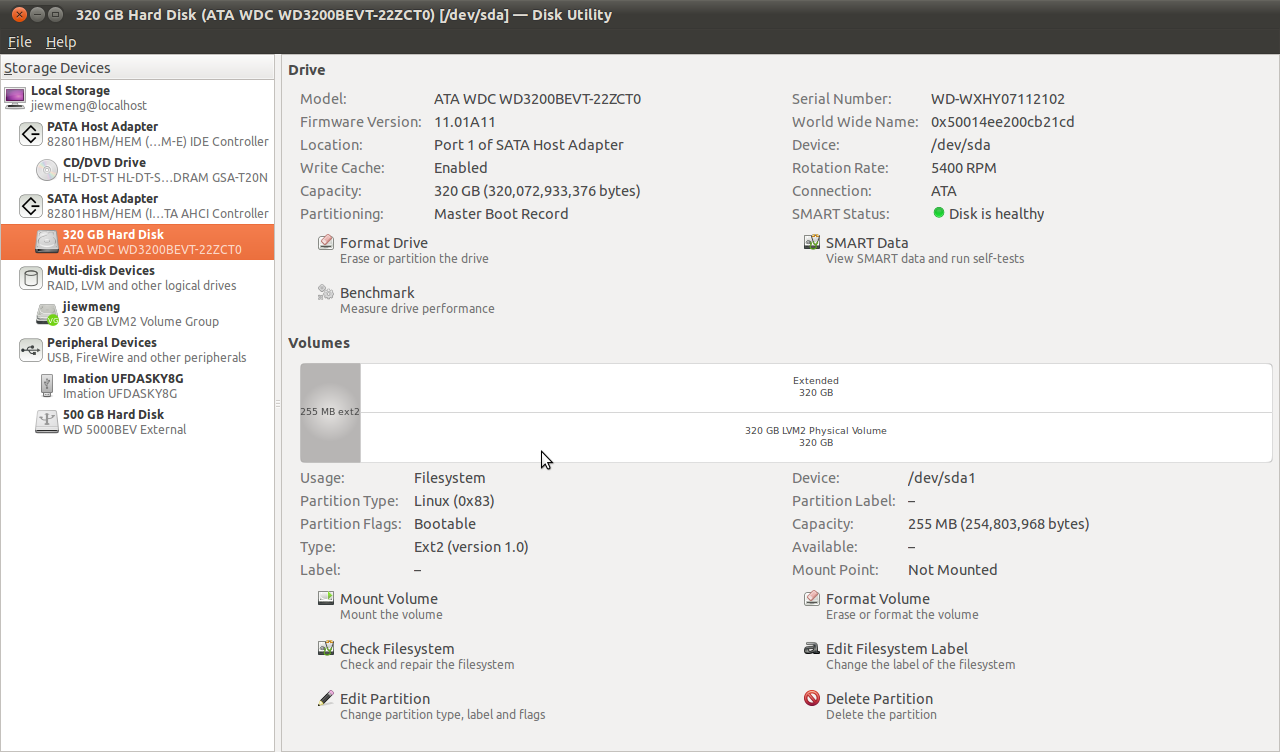 Whats the 255MB ext2 parition for? Shouldn't ext4 be better? Looks awefully similar to those OEM partitions on Windows ... 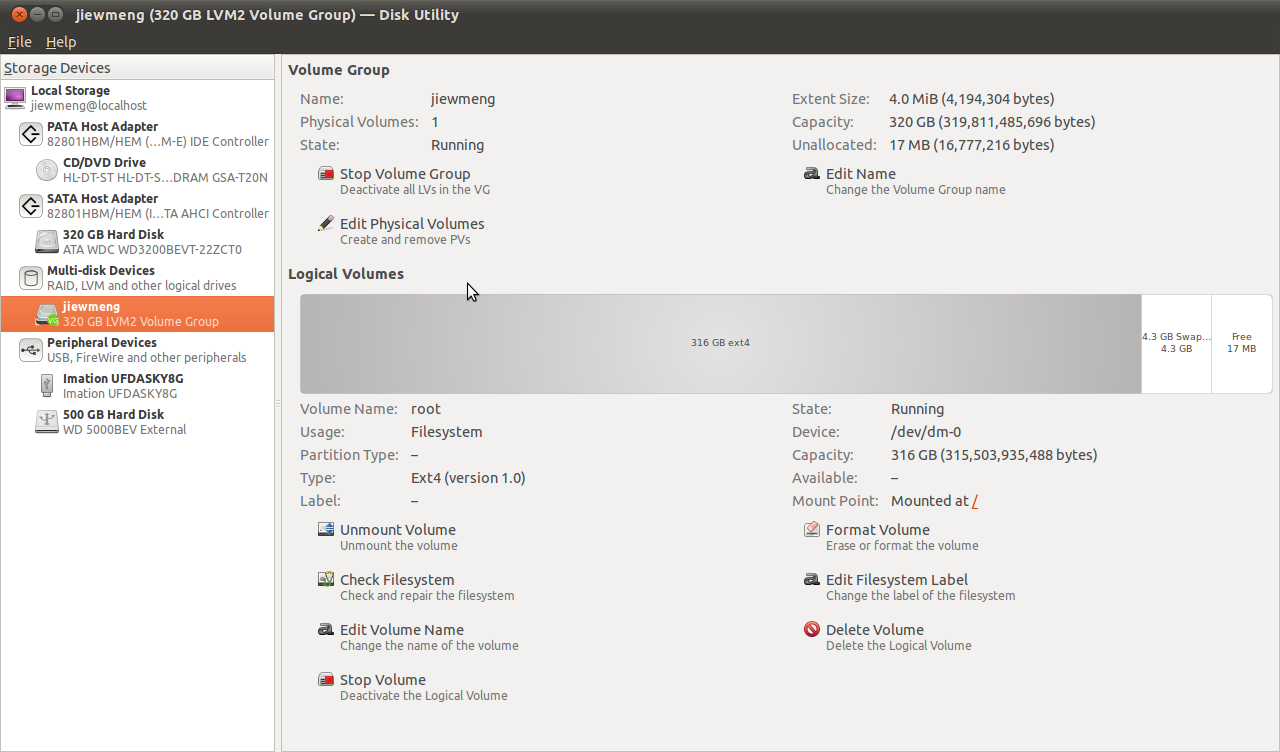 Why is there 4MB wasted ... How do I determine how much space I should allocate to swap. I read previously for Windows that if I have enough RAM, I should have low/no swap space to force OS to use faster RAM? True?

Why does Ubuntu split the same HDD into 2 different Views? 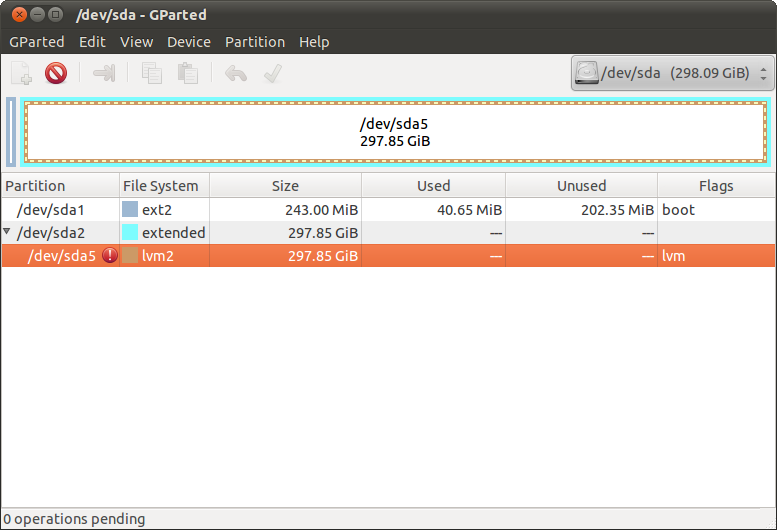 Why do I get such a different picture in GParted? No swap here? Then now, if I want to add a partition, I should shrink sda5 then add one? Since its the OS partition I cant do that when booted I guess?

partitioning gparted lvm
Share
Improve this question
asked May 21 '11 at 9:50

I don't know why the default LVM setup was chosen, but I can offer some background on how LVM works.

Without LVM, you divide a disk in partitions, and each partition contains a filesystem (/, /home, etc.) or something else such as swap space.

Parted isn't showing the LVM logical volumes. Either this version of Parted doesn't support LVM (hmm, I thought it did), or you need to tell it to switch to a different view, or you have already created partitions but not logical volumes yet.

I don't know where you're seeing 4MB wasted. I see 17MB unallocated, and I don't know why. Up to 4MB unused could happen with LVM: the size of each logical volume is a multiple of 4MB.

I don't know for sure what the 255MB ext2 partition is for, but I guess it's meant to be /boot. It used to be that Grub, the default Ubuntu bootloader, couldn't boot from LVM. But Grub 2, the default bootloader for new installation since Ubuntu 9.10, supports an all-LVM installation, so you probably don't need that boot partition. (There are rare cases where an ext2 boot partition is still useful, for example if you're dual-booting with another operating system that doesn't support loading a kernel from LVM or ext4.)

I think I've addressed everything except the amount of swap. (Aside: you shouldn't ask unrelated questions in one question. The amount of swap has nothing to do with your interrogations about LVM. But the topic has already been done to death, so don't ask it separately, just search the site.) Since disk space is cheap, don't hesitate to have ample swap. The machine I'm posting this from has 4GB of RAM and 16GB of swap. Having low or not swap space will absolutely not “force the OS to use faster RAM”, this is completely wrong and I advise treating any source that says this with deep suspicion. (As far as I know this applies to Windows as well.) The OS will use RAM whenever it can. Swap is only used as a last resort, when there isn't enough RAM. Note that on a normal system, you should expect to see some swap in use. That's because RAM isn't just for storing the memory of running processes, it's also for caching disk contents. In fact, it's quite common to have about half the RAM used by the disk cache, and to have some process memory swapped out. If your system didn't do this, it would be running slower, because it would waste more time reloading the same files from disk again and again.

While I think the core of your answer is answered above, I would like to also point out that managing LVM is easiest via the graphical interface of Ubuntu.

However if you're building a server that will be command-line (particularly a headless one), you may find LVM a bit painful to manage - especially if you're new to Ubuntu.

Not the answer you're looking for? Browse other questions tagged partitioning gparted lvm or ask your own question.

3
Unable to resize LVM partition just after Ubuntu install with 'use lvm' option
27
How to shrink Ubuntu LVM logical and physical volumes?
1
Issue with increasing the root partition from the swap
1
Issue with encrypted lvm during setup
0
How to prevent the catastrophic loss of ubuntu lvm drive encryption key?
0
Confused about partitioning in Ubuntu 16.01 32 bit
2
Increasing /boot partition by shrinking ubuntu-vg logical volume