Is it possible to set on-peak and off-peak hours in vnstat for monitoring bandwidth?

I have recently downloaded vnstat to monitor my Internet bandwidth usage. I have a limited data plan but my ISP provides unmetered bandwidth during off-peak hours (2:00 AM to 8:00 AM). So, I would like vnstat to report the data usage categorizing on-peak usage and off-peak usage separately.

I have gone through man vnstat but couldn't find any help in this regard. Would it be possible to to get two different stats for on-peak and off-peak hours using vnstat? If not, what alternatives are available to me to achieve the same?

AFAIK no bandwidth monitoring tool is better than vnstat. Unfortunately it does't support this feature. But you can achieve this by using multiple databases for vnstat.

Save the data for on peak hours to vnstat1 and for off-peak to vnstat2. Make a daemon script that will switch them based on time of the day using an if condition in an infinite loop; if not between 02-08 hours use vnstat1 else disable vnstat1, enable vnstat2 and sleep.

I wrote the following bash script. Save it in a file and make it executable using sudo chmod x <filename>. Test it for some time. Finally make the script auto start with OS. Run it as the root user. (Just add the path to the script in /etc/rc.local for it to be executed at boot time).

Change i=eth0 on 5th line to the network interface you want to monitor.

Also it's a good idea to reset the data on the default database (/var/lib/vnstat), as it will never update if everything in the script goes well.

Hopefully this helps a bit.

So I am going to give you a program I wrote, because I was having problems with cron working. I don't know shell scripting unfortunately so this is in python, but it worked for me, and it is pretty simple, but nice. Sorry I didn't comment my code, but I really didn't want to go back through it. I know some parts might not be the best, but it works.

Enter the device you are monitoring (I didn't go through and error check, so if you enter something like monkeybutt, it will try and run vnstat -i monkeybutt, every 15 seconds, just Ctrl+C out).

The program will run through every 15 seconds to see if the time matches, it won't give any messages. It's meant to be run in the background. Once it starts, it will take a shot every 15 seconds of the network, on the device you chose. Using the vnstat command, plus a counter saying how many seconds you have left of monitoring.

After completing the scans it will ask if you want to exit, and give you an option if you want to show a report, otherwise you can just exit. All of the stuff is stored in vnstats database anyways.

Old part of post (may be helpful to some people)

You could get gnome-schedule, then put in your command for example vnstat -h, and set it reoccurring during times you are trying to monitor. Maybe too simple, but hopefully someone else could expand further.

Additional(Edit): I have not used vnstat very much, which is why I was hoping someone could expand on that part, but with the gnome-schedule, you can schedule a command to execute during specific parts of the day. So using vntstat -tr -l (traffic switch, monitor live traffic), would show the traffic while running (which you can schedule in gnome-schedule, but you may have to manually Ctrl+C] out.) 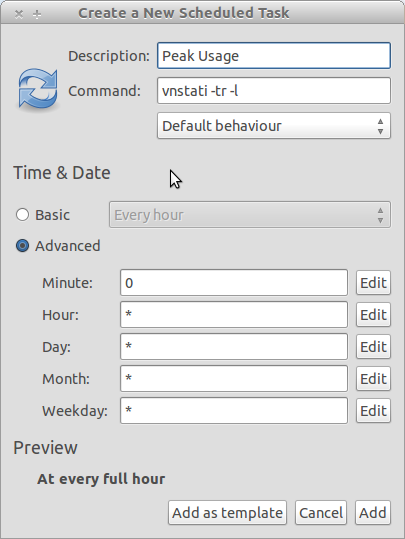 (Sample screen of how to put things into gnome-schedule.)

Do you know how to get a 'snapshot' of the bandwidth using vnstat already, or do you need further help on those commands? I can try to work with the program more.

Not the answer you're looking for? Browse other questions tagged command-line bandwidth vnstat or ask your own question.

2
How to set a single shortcut to switch an Internet connection on and off
2
Long term bandwidth monitoring by port
2
List Video Filename and Duration for multiple files in folder and subfolders with path too if possible
38
Is it possible to enter password for sudo only once, and configure it to not require for password on other terminals?
4
Why is internet upload so high when I don't actually upload much?
5
How can I add a user and set the password for them at the same time?
1
Which process is using my network data?