This Q and A will cover a very specific yet common case: given many files with the same or similar name each in its own directory, create a copy of each of them in their original directory but with another name.

You might wonder which rare case would require such operation. It's not so rare. Some emerging software, expecially those based on the MVC (Model / View / Controller) design pattern may require the programmer to implement the various components each in a different directory.

An example of a quite famous software implementing such structure would be the popular e-commerce application OpenCart. But there are many others.

A common practice is to create new components by copying an existing one or a core one, apply variations and save them. In case inheritance and similar can't help us, we end up having to duplicate 10-20 files. An utterly boring and error prone process.

This is a typical example: from a bank transfer script implement a direct debit script by using the former as "boilerplate code" (don't bash me, I did not create this architecture). Between translations, Model, View and Controller management and others, the number of files to copy each in its deep directory quickly becomes cumbersome. 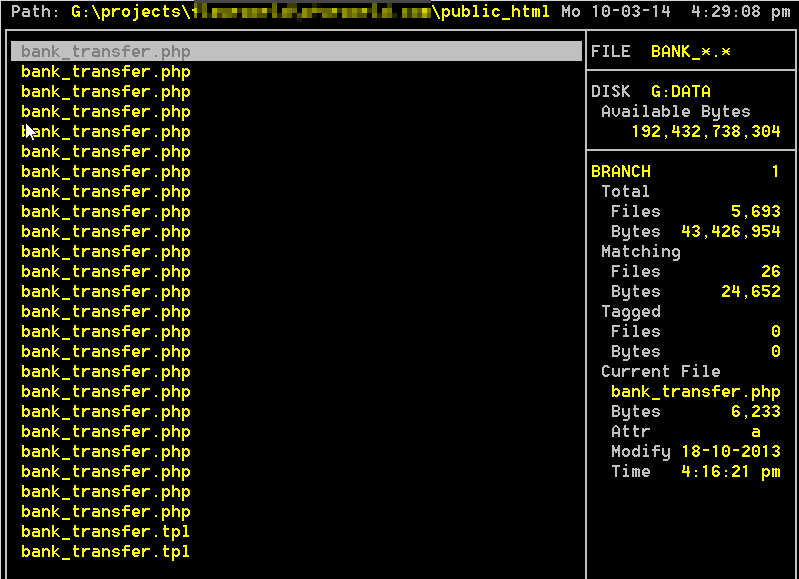 This little script comes to help exactly in this situation.

The last option is expecially useful because selecting the right match that covers a mass of files with names variations or extensions variations may quicky become a challenge. Avoid getting a complete mess by previewing the changes before applying them!

The script is very simple and has NO pretense about being the best, the quickest, the cleanest, the safest. It's what works for me and I have decided to share it in hope somebody else will take benefit.

If you start it with no parameters or a wrong command, it will show some brief instructions:

Confusing? Don't worry, I have prepared some examples and "gotchas".

We have some files in a sub-directory called: apps/res/

We want to copy all the files whose name contains the word: sendmail into new files that in place of sendmail have newthing.

We may issue the following command:

This command line tells us that we just want a preview; the starting directory is apps/res/ (that is, it's under our current directory), that we are going to search for all files beginning with s (s*). Among the found files, we are going to pick only those whose name contains sendmail and copy them to files residing in the same directories but with sendmail replaced by newthing.

Here is the output of this preview:

You see, even if we specified s* as search pattern, the script was "smart" enough to just pick the subset of "beginning by s" files that also contains "sendmail".

ls apps/res/ will show how now we have both the original files but also the same files with newthing. If we used "rename" in the line above, we'd only have the newthing files.

Let's change the files again. This time we rename them:

Notice the values used for the various parameters. The directory now is the following:

More complex example: let's move to OpenCart's top install folder and return to the the bank transfer MVC files. We need to create copies of those files, each in its respective directory. They will be used to implement a direct debit payment module. Here's the command line and an extract of the output:

Oops! Something went wrong! Lucky us, for having used the preview. What's wrong in the above command? The "src" argument is the wrong one. In fact, bank_transfer.* is internally passed to a direct "search and replace" function (sed). It's not expanded with a "file globbing" function but as regular expression. Therefore all the files in the preview are transformed into: direct_debit.

Now that we know about this gotcha, we can rewrite the command line to achieve the desired result:

Now it works! Now extensions are preserved, even when they change (.php and .tpl).

Follows the little script source code. I strongly suggest to save backups before doing "live" renames and to always use the preview functionality. Remember, this is a recursive Unix script, its effects may be extremely nasty and irreversible!

Not the answer you're looking for? Browse other questions tagged command-line files batch batch-rename or ask your own question.

4
How to rename a batch of files with an incrementing number in the file name?
4
Move/Rename a lot of files with specific file size
5
Recursively rename all files and folders to Title Case from terminal
8
How to Rename Multiple Files With Their First 10 Characters?
3
Rename files in different directories with the same name, so each has a unique (numbered) name
5
Copy files of same name into same directory
9
Rename multiple files at the same time
1
Rename files of the same name in multiple subdirectories
0
Rename files from their content
1
Rename multiple files with same digits after decimal