Sometimes while going to open a file from Nautilus I do not find the intended application in "open with" menu on right click. Or the desired application remains hidden in a long list of applications. It becomes difficult to find it quickly.

Prior to Ubuntu 11.04 there was a nice feature "Use a custom command" under "open with" menu on right click on a file. One could able write a command in the box to open a file with a custom application. This option is no longer available in Nautilus after Ubuntu 10.10. 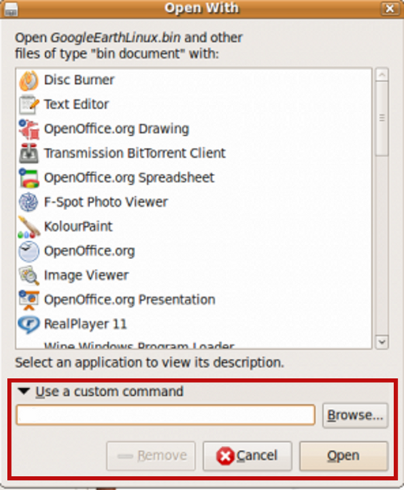 Can I have a similar "Use a custom command" dialogue box on Nautilus so that I can open a file writing any custom command in a box as shown in the above picture?

Here is a small Nautilus script which gives you a "Use a custom command" dialogue box on Nautilus.

Or you can do it from GUI. Right click on the script, then go to Properties >> Permissions and check the box corresponds to Execute to give the script execution permission.

After that when you right click on a file you could see an option Scripts followed by another option under script Open with custom command. 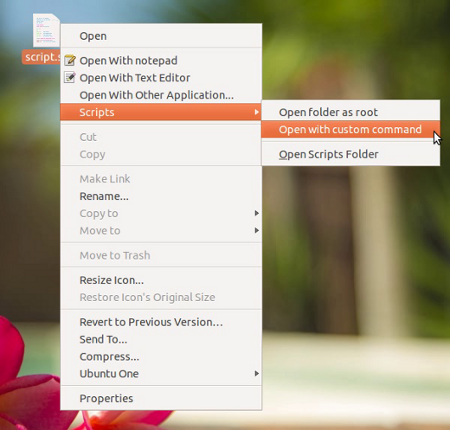 When you select the option Open with custom command, you will get a dialogue box like,

You can write a command in the box to open the file.

You can open any file by entering corresponding application's command only in the dialogue box.

For example you can open a .txt file using gedit or a .pdf file writing evince in the dialogue box.

If you want to open a file as root, just use gksudo before your command. To open a .txt file as root you can use in the dialogue box,

If you are not sure which application to use to open an unknown file, you can use in the dialogue box,

Opening a file with a Terminal Application:

If you want to open a text file using vi, you can use in the dialogue box,

To use gksudo you need to have gksu installed. In Ubuntu 13.04 onwards it is not install by default. You can install it using,

Not the answer you're looking for? Browse other questions tagged unity command-line gnome nautilus or ask your own question.

34
How do I customize the context menu in Nautilus?
-1
I want to right click+ open terminal with custom terminals. HOW?
0
Making Minecraft.jar executable

2
How to make file association (not with CLI tool/command)?
16
File / Application association using a custom command is gone?
3
How do I add a right click “Compress as ZIP” menu entry?
2
Where to find actual commands for Nautilus “open with” options?
7
Nautilus context menu for current directory when there's lots of files / “Open in Terminal”
1
Add nautilus scripts to the context menu/actions
2
Open terminal from Nautilus right-click menu