What should I do when I get 'There are stopped jobs' error?

I face this type of situation many times.

For example, whenever I try to open some file in emacs with sudo rights using: 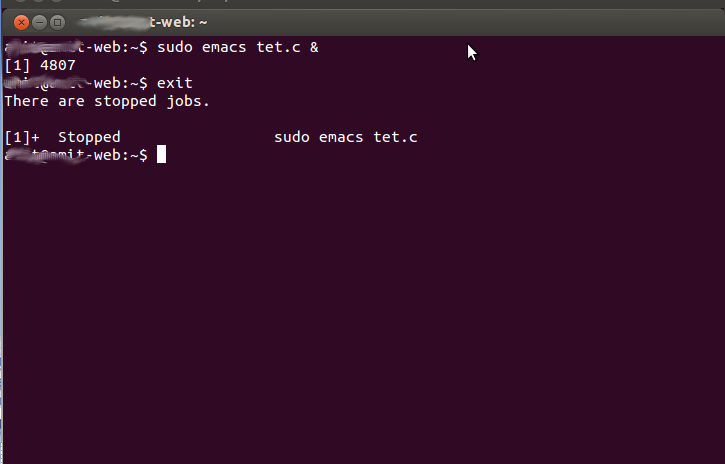 I have two questions related with this:

There are stopped jobs message is far, far away to be an error. It's just a notification telling you that you attempt to exit from the shell, but you have one or more suspended jobs/programs (in your case emacs which you putted in background using & at the end of your command). The system doesn't let you to exit from the shell and kill the jobs unless you mean to. You can do a couple of things in response to this message:

To answer the second question, I will tell you that not Ubuntu or emacs behaving like this. This is a normal behavior when you put an application to run in background. In this case sudo is asking for password, but is asking in background, so you can't see this fact. To see it, you should bring back the job in foreground using fg command:

After this you can type Ctrl+Z to put again the job in background if you want. Then you can run again 'fg' command to bring back the job in foreground and so on.

You got the message, because system warns you about active jobs associated with your current shell.

You can list these running/stopped jobs by running: jobs,

Then you can do one of the following:

To answer question about sudo, it won't ask you for the password, as it requires to have active terminal in order to receive the password from standard input, and by running it the background, the shell doesn't wait for the command to finish, so you don't have possibility to interact with the command.

In this case, you've 3 possibilities:

When you encounter there are stopped jobs error:

Not the answer you're looking for? Browse other questions tagged process emacs job-control or ask your own question.

12
What differences are there between the various version of emacs available?
155
What are zombie processes?
4
Are there any command to see how processes are working?
2
Why doesn't ps -al display my java programs?
1
Stopped Jobs error upon logout
1
Are there processes that can't be stopped?
0
Find out what is starting processes by command