Is there a tool to update my PPA sources.list entries after upgrading?

When I upgrade from one version of Ubuntu to the next, the upgrade tool rightly disables all my PPAs, so that software compiled for or otherwise tied to the old version of Ubuntu does not interfere with the new version that I just upgraded to.

Is there any way to automatically re-enable and update any PPAs that provide packages for the new version of Ubuntu? For example, suppose I'm currently running Maverick, and I have two PPAs enabled, "foo" and "bar". Suppose that "foo" provides packages for both Maverick and Natty, while "bar" provides packages for Natty only. Is there a tool I could run after updating to Natty that would re-enable my "foo" PPA and update it to point to the Natty packages, while leaving the "bar" PPA disabled?

There is a tool called Y-PPA-Manager that lets you do exactly that.

To try Y-PPA-Manager, you need to run the following commands in a terminal:

After installing, run the software and click on 'Advanced' button. 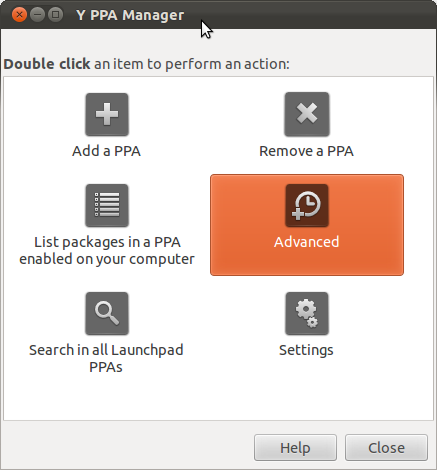 After clicking on that button, you would come up with a window similar to the one below. Click on 'Re-enable working PPAs after Ubuntu upgrade'. 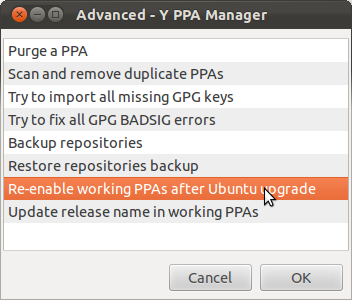 Click OK and wait till all the working PPAs are re-enabled. When the entire process is successfully completed, you would be notified.

There is an intriguing simple command as you can now keep PPAs and Third Party Repositories enabled when upgrading to a newer Ubuntu version:

The RELEASE_UPGRADER_ALLOW_THIRD_PARTY environment variable can be used with both the command line and the GUI upgrade tools. So when you want to upgrade your Ubuntu system and keep PPA and third party repositories enabled, run the upgrade from a terminal, like mentioned above for the command version. I guess BEFORE the actual system upgrading. For the GUI version:

(-d is used to allow upgrading to development releases - for example to upgrade from Ubuntu 18.10 to 19.04 right now, while Ubuntu 19.04 Disco Dingo is still in development)

It's worth noting that you may still see a warning about third party sources being disabled on upgrade, but those that support the Ubuntu version to which you're upgrading will not be disabled.

A regular Ubuntu release upgrade (to a newer Ubuntu version) disables any PPA or third party repository that may be enabled. Some recent changes to ubuntu-release-upgrader allow keeping PPA and third party repositories enabled when upgrading to a newer Ubuntu release, while also providing better support for cases in which the users have their own mirror of the archive. This is done by using an environment variable, RELEASE_UPGRADER_ALLOW_THIRD_PARTY.
Source: Linux Uprising Blog and Brian’s Blog

I only found this solution after the upgrade and ran the command anyway, it added a new entry for each PPA with the new Ubuntu version's name in it. I just had to delete the old ones then.

Not the answer you're looking for? Browse other questions tagged upgrade ppa or ask your own question.

2
do-release-upgrade disables third party software sources. Easy way to re-enable them?
3
Changing PPAs from lucid to maverick
2
Why has Ubuntu 18.04 disabled Mozillateam PPA?
1
Upgrade from 18.04 to either 18.xx or 20.xx higher releases through only commands
0
How to manage package from previous Ubuntu versions
0
Automatically check ppas if they work with next Ubuntu release
0
Repository Location

2
Does Wine 1.3.X have a PPA for Natty
0
How to update all the installed software in Ubuntu without using any PPA?
1
Is there a PHP 5.3.x PPA for 10.04?
1
What determines PPA updates after new Ubuntu releases?
0
Upgrading Ubuntu 12.04 LTS to 14.04 LTS: legacy PPA upgrade
0
Is there a Kdenlive PPA for Ubuntu trusty or how to use a PPA for a different version of Ubuntu?
5
Has there been any malicious PPA so far?