How to get a Dell XPS DE to recognise the Cypress touchpad under Ubuntu 13.10?

I have recently bought a Dell XPS 13 Developer Edition (also known as Sputnik), supplied with Ubuntu 12.04. I've wiped that and installed 13.10 from scratch. I believe all the code improvements made by Dell have now been incorporated into the mainline kernel, so in theory everything should work without additional PPAs.

However, the touchpad works as a mouse-like input device (I have a pointer, I can left-click and can touch to click) but there is no gesture support. I'm particularly looking for two-finger scroll. Also, the typing cursor frequently jumps about, and from what I have read on the web, the sensitivity of the trackpad may be responsible.

If a suitable device is available, Ubuntu should show extra trackpad options in System Settings -> Mouse & Touchpad, but I just get the usual ones (Primary Button, Double Click [Speed] and Mouse Speed).

Here is a snippet from cat /proc/bus/input/devices:

It looks like it is doing something but the "ignoring this device" waves a red flag for me. Also, the device comes up as a hex string rather than being seen as a "Cypress" pad - it seems it should show like this in gpointing-device-settings.

I've searched for some possible strings in dmesg and found these:

Furthermore, I've noticed that I appear to have two touchpad devices erroneously detected. At first I mistook one for the touchscreen being wrongly reported, but in fact that is reported fine. The output of xinput above reveals the issue, as does gpointing-device-settings: 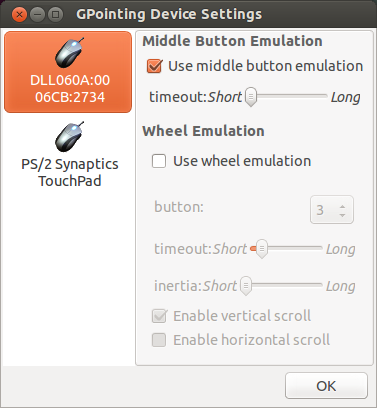 I realised I'd made the assumption that I have a Cypress touchpad just by looking on the web, so I thought I'd try the Synaptiks application as well. This reports an error and will not start:

No touchpad was found in this system. If the system has a touchpad, please make sure that the synaptics driver is properly installed and configured.

So for the time being, I'll continue to assume I have a Cypress pad that requires a Cypress driver.

This is fixed using these instructions, found via this post. Although the poster in the first link found the fix did not work fully in their case, it has completely resolved it for me.

The fix is simply to add this line at the end of /etc/modprobe.d/blacklist.conf:

This results in only one driver being recognised, which now provides the expected trackpad switches in Ubuntu Settings. Two-finger scroll now works fine.

Interestingly it looks like I am indeed running a Synaptics touchpad - it is still detected thus:

and there is no mention of a Cypress device at all.

g-pointer-settings and Synaptiks now both look like they will work (though I now no longer need them). I've not noticed any spurious cursor behaviour, but will continue to monitor.

Not the answer you're looking for? Browse other questions tagged dell touchpad or ask your own question.

7
Help trying to get two-finger scrolling to work on Asus UL80VT
3
Where synaptic touchpad settings in user account?
1
How to config Trackpoint + Synaptics touchpad only enable clicks on Linux (Ubuntu)
3
Dell Inspiron 7347 - Inactive cursor with my touchpad on UBUNTU 14.04
0
Lenovo IdeaPad Z570 touchpad stopped working after upgrade to 15.04
1
How to enable touchpad, without changing touchpad settings in BIOS to basic