So I had to uninstall the ppa version of Xournal and build from source (with a modification). And now .xoj files open automatically with KDE's archive manager Ark, and are identified as being of type "Gzip archive" when one selects Properties from the right-click menu in Dolphin: 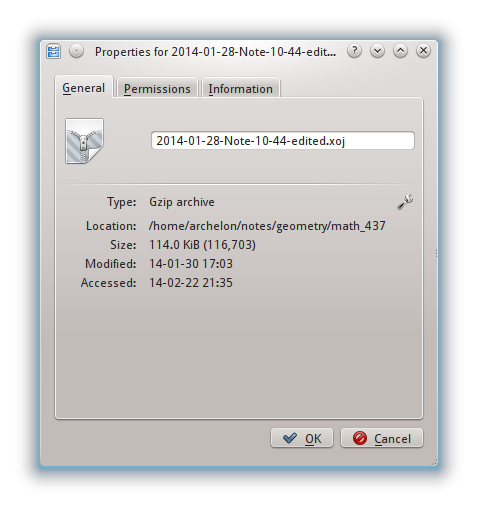 (Before, .xoj files opened with Xournal and were correctly identified.) This state of affairs persists despite all of the following: 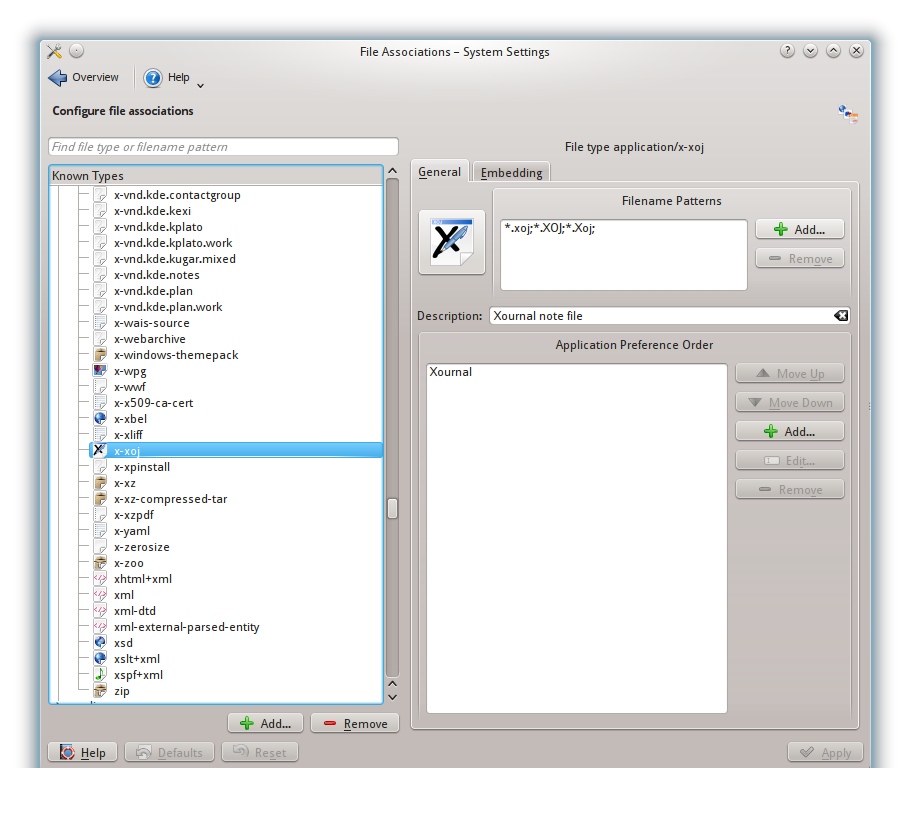 (Note also that application/x-gzip specifies only the .gz extension: 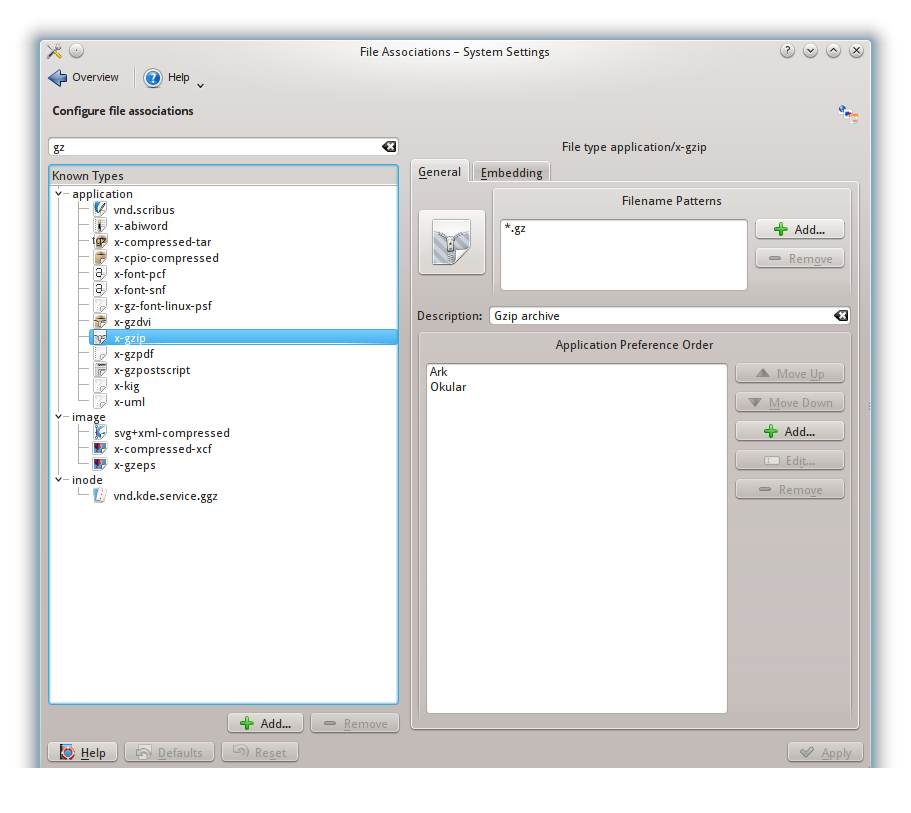 Edited to add
I have discovered that the file --mime-type [filename] and mimetype [filename] commands produce different results, as in this question:

However, there is no entry for application/x-gzip in /etc/mime.types (from which the file command supposedly gets its information); and, indeed, there shouldn't be, according to the comment at the beginning of that file, which reads in part:

Note: Compression schemes like "gzip", "bzip", and "compress" are not actually "mime-types". They are "encodings" and hence must not have entries in this file to map their extensions. The "mime-type" of an encoded file refers to the type of data that has been encoded, not the type of encoding.

Users can add their own types if they wish by creating a ".mime.types" file in their home directory. Definitions included there will take precedence over those listed here.

After looking at the manpages for mimetype and file, I decided to check the environment variables $XDG_DATA_HOME and $XDG_DATA_DIRS, which apparently are used by the former but not the latter. But I didn't know how to report the value of an environment variable, so I tried cat $XDG_DATA_HOME, which set the value (to nothing) instead of reporting it. Edited to add: Or so I thought at first; actually it was already unset, as we shall see. The correct command is echo $XDG_DATA_HOME, as I learned from reading about environment variables here. So then I discovered that $XDG_DATA_DIRS was set to /usr/share/default:/usr/local/share/:/usr/share/; the first of these doesn't exist. I don't think that matters, but anyway I ran the commands

to accord with the standard. I doubt that any of this will make any difference, but I'm going to try another restart now (although I think those environment variables will be automatically reset anyway). Next edit: Yes, they were; in fact the variable XDG_DATA_HOME is now null again.

Anyway the bottom line seems to be that KDE is using the functionality that file is using, rather than that which mimetype is using. If I understand things correctly, this means that it is using magic instead of MIME types. I now suspect that magic is responsible for this whole issue.

So the file manpage seems to be saying that these are the baseline magic files:

The information identifying these files

(i.e. "files [which] have a ``magic number'' stored in a particular place near the beginning of the file")

(I have confirmed this with strace, as suggested here.) Neither $HOME/.magic.mgc nor $HOME/.magic exists on my system; but, since presumably xoj files contain precisely that gobbledygook which causes a file to be magically identified as application/x-gzip, it would do no good to create them (please correct me if I am wrong).

The solution I'm looking for, then, would be a way to have the MIME-type specification override magic for a given file extension; I thought I had seen something that looked like it might provide a hint as to how that might be accomplished, but I can't find it now. Yet surely such a method exists.

tried cat $XDG_DATA_HOME, which set the value (to nothing) instead of reporting it

cat will certainly not set the value of the variable. cat would print the contents of the file of the name you provide it with, or in the absence of a file name it would print what it reads from standard input. Furthermore the variables are expanded by the shell you are running (usually /bin/bash) and thus cat doesn't even ever see the name of the variable.

Now in your specific situation, the variable seemingly wasn't set, thus expanded to nothing, thus cat had no parameter, thus cat printed from stdin and I presume you had to Ctrl-C-end it, or maybe Ctrl-D (end of file).

Not the answer you're looking for? Browse other questions tagged 12.04 kubuntu mime-type file-association gzip or ask your own question.

9
'file --mime-type' and 'mimetype' Commands Returning Different Results
4
Where is the file used by file(1) and libmagic to determine mime types?

4
Where is the file used by file(1) and libmagic to determine mime types?
1
Associate .mm files with Freeplane
2
file command reports text/plain for .css file
0
'file --mime-type' vs 'mimetype' for php files
4
Mimetype mess after calibre installation. How can I fix it?
3
Files starting with a comment have the wrong mime type
2
How can I view binary .log files with application/octet-stream mime type?