Why can't YouTube, Audacity, Tartini and PulseAudio all get along?

(This is on Ubuntu 12.04 LTS with all the latest updates applied.)

One audio application I use a lot is Audacity, both as an audio player and as a recorder, usually with the cheapest headsets I can find.

I also use YouTube a lot (i.e. Flash in Firefox).

The two work together pretty well: e.g. I can play audio from both simultaneously.

Recently, I started to use another audio application: Tartini. Thanks to Jeremy Salwen's and Jevon Longdell's efforts, it compiled without any problems, and after getting OpenGL to work, it runs, too. So I expected it to mix in with the other two: 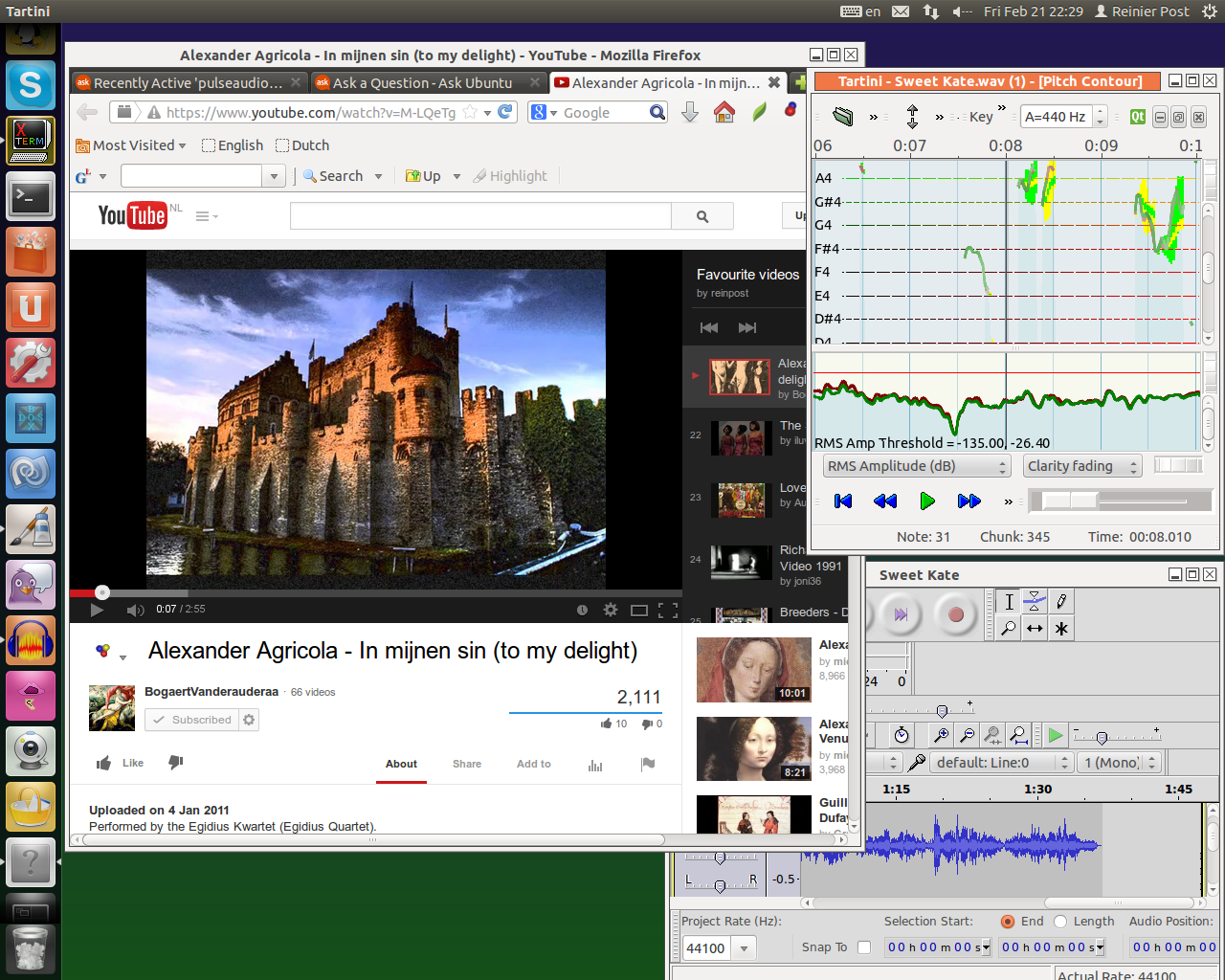 but it doesn't. Initially, it wouldn't play any audio at all.

Somehow, I found out that in Ubuntu's "sound settings" 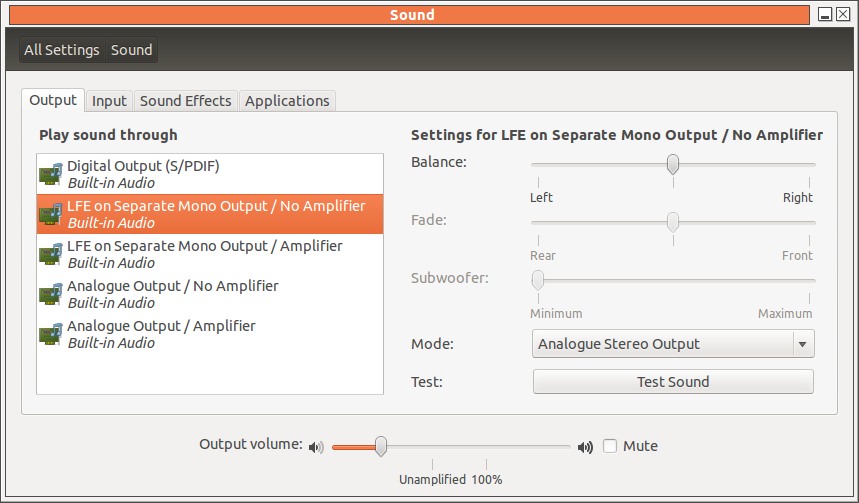 I had to select 'Digital Output (S/PDIF)' before audio played back with Tartini would be audible - but this mutes YouTube and Audacity. I don't want to need to switch between 'Digital' and non-'Digital' outputs depending on the application I happen to be using. I don't care whether 'outputs' (whatever they are) are 'Digital' (whatever that means); I just want sound produced by an application to play whenever I ask it to, whether or not some other application happens to be playing or recording sound at that time.

Somehow, I found out that there is an application called 'paprefs' that has an option to enable 'simultaneous output on all local sound cards', whatever that means, so I installed it and enabled that option: 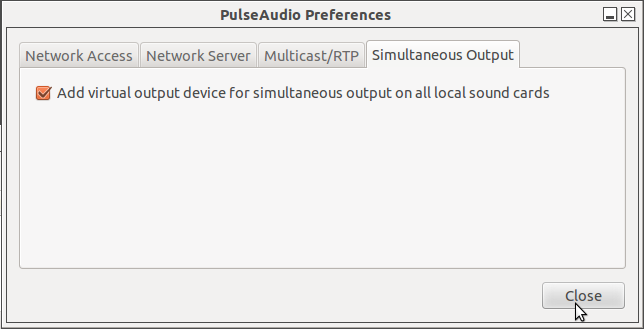 This gave me a new option in the Sound Settings:

and after I selected that, Audacity and Tartini would both play audio, not simultaneously, but whichever was started first. At least, that was the case for a short while; then the previous behavior returned. 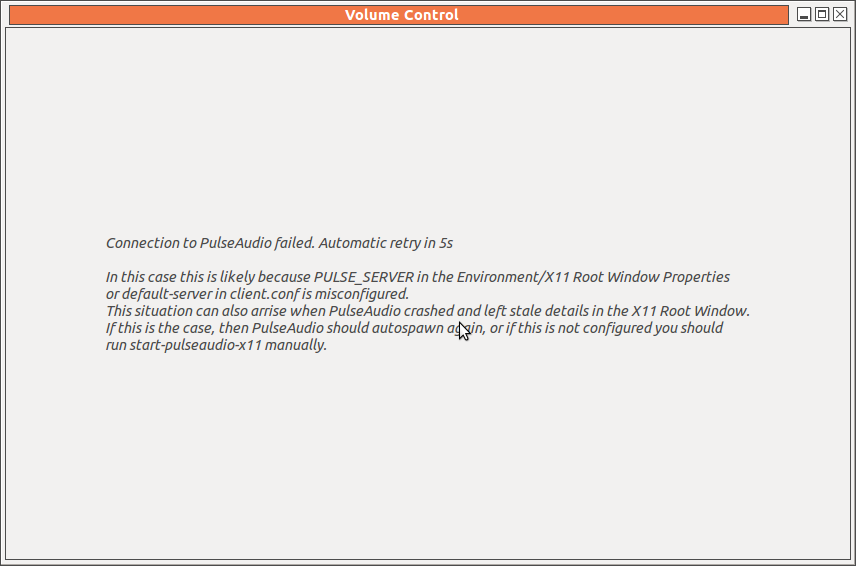 and indeed, nothing related to pulse is running on my system.

Maybe this won't help you, but I had similar problem - my Tuxguitar didn't make any sound while Youtube was on. I solved it by installing Fluidsynth and Qsynth, then making some random changes in Qsynth (and then Tuxgutar) settings.

I found it (also with instructions) here, on the bottom of the page.

I just found a partial answer by Jan Schmidt here:

It's ten years old and uses an import of the RtAudio audio library that only supports ALSA, which means with a PulseAudio system, it can't access the sound device.

So I suppose the answer is: learn C++ audio programming with RtAudio and upgrade the library yourself.

Not the answer you're looking for? Browse other questions tagged 12.04 sound pulseaudio youtube or ask your own question.

49
Why am I getting this “Connection to PulseAudio failed” error?
5
How do you use both Pulse Audio and Alsa?
1
Playing a MIDI keyboard without JACK / how to use JACK and PulseAudio/ALSA
1
Can't Start PulseAudio Ubuntu 12.04 | Can't use USB Headset
0
Installed and then removed Pulseaudio and it's messed up the system
3
Desire to use ALC892 multiple independent outputs with Ubuntu 20.04