I wonder, why can't I change my mac address by doing this:

The error is SIOCSIFHWADDR: Cannot assign requested address I googled but found nothing valuable.

There was no error, it even connected to wifi automatically after I did this (even though I didn't do sudo ifconfig wlan0 up). I though it won. However, when I did

I've seen the same mac address as it had before. Nothing was changed.

03:a0:04:d3:00:11 is not an unicast address as the first octet needs to be even. Look at the image below to understand it better. This image is from Wikipedia - MAC address page 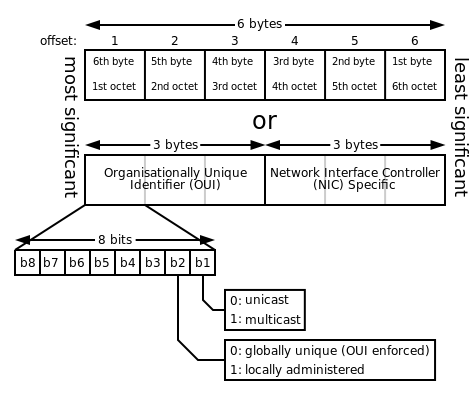 try this out c what happens actually there is a particular pattern of mac address which is only registered one so with a random mac address you can't change the address.

I assume that because you are trying to change the HWaddr of your wireless interface, that you are attempting some wireless pentesting and need to spoof your HWaddr. Well there are a few ways to do this but I will give you my method since I have not seen it included here. The following bash shell code is a very basic random HWaddr generator that I created. It isn't perfect and does have some bugs (such as certain generated MACs not being allowed to the device).

Here is the random HWaddr function for bash:

Now I will explain what is going on with this function:

RAND_MAC() is going to be the function declaration. This is pretty much letting the bash shell interpreter know "Hey, there is a function here." and for it to look for open and close braces {}. After the RAND_MAC() function is declared, there is a single { followed by a nested new function declaration called gen(). Nested pretty much just means a function inside a function. The gen() function is what will randomly generate the octets of the random HWaddr. gen() is a self-contained function and only activates during the for loop below it executes. When gen() is called, a variable called NUM is assigned the value of a command's output. The command which NUM is being assigned is $(tr -dc '0-9a-f' </dev/urandom | head -c 2). This will output a 2-character string using numbers 0-9 and lower case lettersa-fin random order by pulling from/dev/urandom`.

So now that the function gen() is pretty much explained, the rest of the main function RAND_MAC() is going to control the show. The forloop will iterate 6 times. After the 6th iteration, the forloop moves to done and it is finished. The result is a freshly generated HWaddr you can now use with your wlan0 interface or whatever your interface is named. The reason we are using bash functions for this is to keep the data of this script from being in a global scope. We want to keep such scripts local to eliminate errors that I won't get into here. Once you have the function saved to a file, such as something like /usr/bin/macgen, give it permission to be executed.

Now your new HWaddr-generating script is ready to use whenever you want from the terminal command line. You can call the tool by using the command, macgen.

Now comes how to assign this new HWaddr using the method that hasn't been given.

Many have suggested using ifconfig or maybe even iwconfig for changing your wireless interface's HWaddr. Well, ifconfig and even iwconfig are depreciated tools and have pretty much been superseded by the tools called ip and iw. The tool I will use in this answer is iw. The following commands will be what you need to follow to create a virtual interface, spoof it's HWaddr, and prevent having to change your real physical hardware's HWaddr. This method, to me, is much more sane and safer since we can simply bring our real physical interface down with ifconfig and use a completely virtual and fake interface to do all that we want:

First, we will generate the new HWaddr to use.

Then we will use ifconfig to bring the real device down.

Now we can create the VNIC with iw.

And finally, we bring the interface up.

Now you should have a spoofed wireless interface in monitor mode as well as a spoofed mac address for that interface. If you need to change it's mode from monitor to managed so that you can use it to connect to an access point just do the following:

Bring the VNIC down:

[Quick note] Before changing the mode, make sure all other managed mode interfaces are down otherwise, you will toggle an error flag with iwconfig.

Bring interface back up:

Check to make sure the configurations are correct with:

The output should look similar to this:

And when you are ready to get rid of the VNIC, just delete it:

And then bring your real interface back up:

Hope this information helps. Feel free to ask if you are confused about any of this.

As you know only macchanger is a tool to change mac address in Linux. For changing wlan0 interface type ifconfig wlan0 down macchanger -r wlan0 ifconfig wlan0 up -r for random change (automatic) You can get here a deatail list from Here

DragonDragon
1
Add a comment  |
Highly active question. Earn 10 reputation (not counting the association bonus) in order to answer this question. The reputation requirement helps protect this question from spam and non-answer activity.

Not the answer you're looking for? Browse other questions tagged ifconfig or ask your own question.

1
Why can't I spoof my wifi card's mac address to this address
44
How do I change / spoof my MAC address and easily switch between multiple ones?