Cannot use up down to navigate terminal history

In my main ubuntu account I creating on install terminal works as expected, but in an account I created, I cannot use up down keys to navigate history. also I cant seem to use !! to use last command ... below is what I get when using up down buttons

That user account is not using bash (or one of the other built in shells).

Type bash on the $ and you will get another prompt and history will be there (albeit showing only the bash history and not what was executed on the $ you have now).

Have a look at /etc/profile not being sourced. The 1st answer should cover what you want.

EDIT: How do you use a shell other than bash at a terminal as default? is even better (credits to Takkat).

It looks like the shell assigned for that user is not the bash shell (could be the sh shell). To verify this - open the /etc/passwd file in a text editor (sudo if you're going to edit it) and find the line corresponding to the account concerned. If the line doesn't end with ":/bin/bash", then you can modify the last part of the line

:/bin/sh (or /bin/ksh or whatever it might have been)

save the file, and open another login terminal as that user.

You may edit an account's login shell using the GUI too if you wish.

Up to 10.10 navigate to System/Administration/Users and Groups -- Advanced settings - Advanced Tab - and edit the 'Shell' setting (make it /bin/bash)

The terminal shells available are many - and everybody has their favourite. Try each out until you find the one you like.

There are many more.

When I experienced the same problem on my mac os (terminal iTerm2), I assigned for down arrow key HEX-code 0x0E (in order to list history down you need press Ctrl+N which equals to that code - http://www.cisco.com/en/US/docs/ios/12_2/configfun/command/reference/frf019.pdf)

So everything got fixed.

UPDATE: well, maybe by answer is in wrong place since it does not refer to Ubuntu specifically (I am not sure how is it possible to do in Ubuntu - maybe somehow via configuration file?). Anyway, here are the iTerm2 settings: 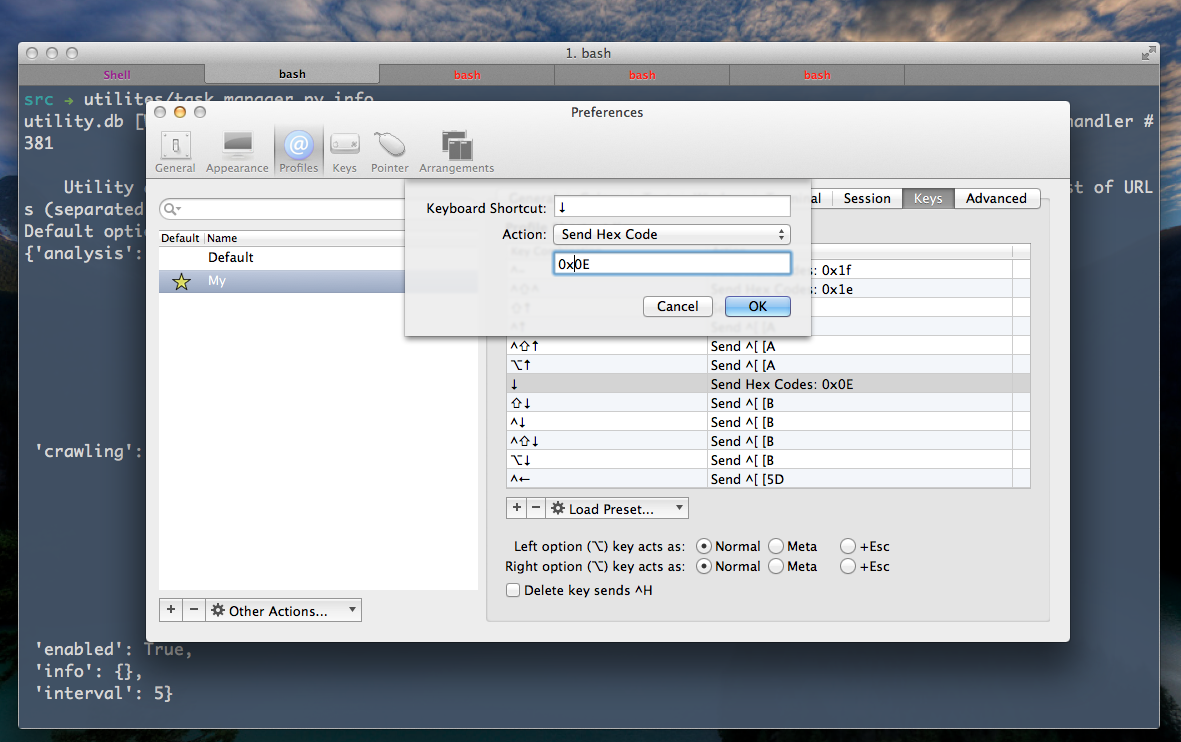 48
Why is /etc/profile not being loaded during non-login bash shell sessions?
14
How do you use a shell other than bash at a terminal as default?

131
Bash history handling with multiple terminals
1
ssh command history and "autocomplete"
0
cannot install from terminal
3
How to prevent commands being removed from history?
2
Cannot open gedit (or firefox, etc) from command line after `su` to another user: "Error: cannot open display: :0.0"
3
File seen on desktop but not in the command line
2
Docker blank/empty previous bash command
1
Cannot navigate through input line and history of input lines of the program Miranda