Is there a tool for checking grammar in LibreOffice?

You need to install LanguageTool extension to achieve grammar check in LibreOffice.

Get it from here : https://extensions.libreoffice.org/extensions/languagetool

And HowTo on install extension can be found here : http://www.libreoffice.org/assets/Uploads/EN_Documents/Installingextensions.pdf

For more alternatives, have a look at this source link:

In LibreOffice Writer, you may install the desired language from menu Tools -> Language. 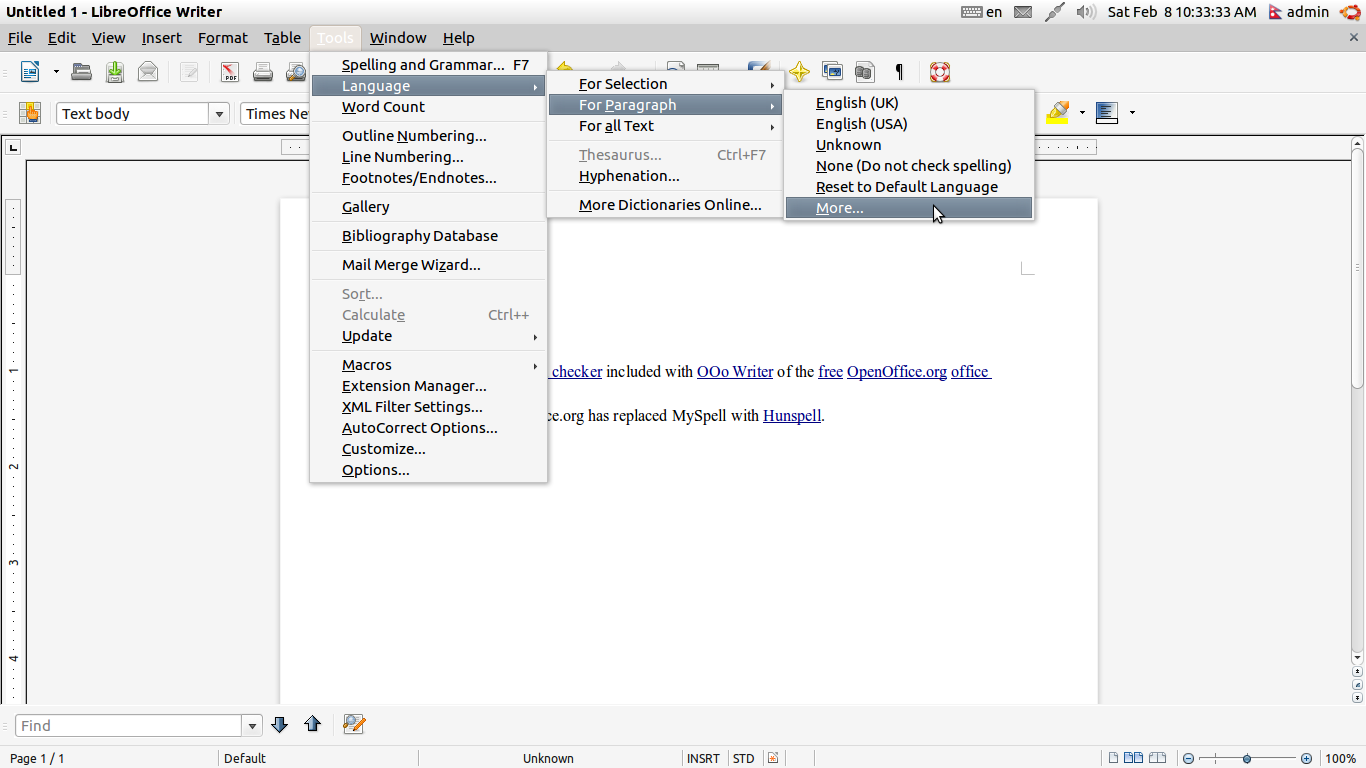 The Main features of MySpell are:

Written in C++ to make it easier to interface with Pspell, OpenOffice, AbiWord, etc. It is stateless, uses no static variables and should be completely reentrant with almost no ifdefs. It tries to be as compatible with ispell to the extent it can. It can read slightly modified versions of munched ispell dictionaries (and it comes with a munched english wordlist borrowed from Kevin Atkinson's excellent Aspell. It uses a heavily modified aff file format that can be derived from ispell aff files but uses the iso-8859-X character sets only. It is simple with lots of comments that describes how the affixes are stored and tested for (based on the approach used by ispell). It supports improved suggestions with replacement tables and ngram-scoring based mechanisms in addition to the main suggestion mechanisms. Like ispell it has a BSD license (and no advertising clause).

Documented Description: GNU Aspell is a spell-checker which can be used either as a standalone application or embedded in other programs. Its main feature is that it does a much better job of suggesting possible spellings than just about any other spell-checker available for the English language, including Ispell and Microsoft Word. It also has many other technical enhancements over Ispell such as using shared memory for dictionaries and intelligently handling personal dictionaries when more than one Aspell process is open at once.

Documented Description: Hunspell is a spell checker and morphological analyzer library and program designed for languages with rich morphology and complex word compounding or character encoding. It is based on MySpell and features an Ispell-like terminal interface using Curses library, an Ispell pipe interface and an OpenOffice.org UNO module.

Documented Description: International Ispell (an interactive spelling corrector) Ispell corrects spelling in plain text, LaTeX, sgml/html/xml, and nroff files. [x]Emacs and jed have nice interfaces to ispell, and ispell works from many other tools and from the command line as well.

No ispell dictionaries are included in this package; you must install at least one of them ("iamerican" is recommended by default for no good reason); install the "ispell-dictionary" package(s) for the language(s) you and your users will want to spell-check.

It's a good idea to install "word list" package(s) for the same language(s), because they'll be used by ispell's (L)ookup command.

Not the answer you're looking for? Browse other questions tagged software-recommendation libreoffice or ask your own question.

2
Is there a Grammar checker for LibreOffice on Ubuntu?
209
How do I enable the “Universe” repository?