When I check for updates, I get a "Failed To Download Repository Information" error.

This is what comes up under details:

This is a known issue, and is exacerbated for clients behind proxy caches. Some large organisations and ISPs (especially in remote parts of the world) have transparent caches of which you may not be aware.

The fundamental issue is that the apt repository format is subject to race conditions when a mirror is updated. This problem particularly affects repositories that change rapidly, such as the development release.

You can track progress on the fix for this in this bug (please mark yourself as "affects me too" in the bug) and this blueprint. But be aware that it is a complex issue and may take more than one release to resolve.

The easiest way to fix this is:

The only solution that worked for me is from unix.stackexchange.

It happens because there's a known bug it apt, and the solution is to update with a different compression method, so the files load correctly and the checksum succeeds.

Give this a try:

(thanks @brook_hong from the comments for the rm part)

I still had the problem after removing the directories and doing sudo apt-get update.
Only the following step solved my problem:

I don't know if this is the right way of fixing it...
I've found the solution here.

This can happen when your mirror is not up to date or serving errors from being overloaded. You can either wait a while and try again, or switch to another mirror:

If you're behind a proxy, then create a file named 99fixbadproxy in /etc/apt/apt.conf.d/:

Paste this into 99fixbadproxy and save it:

The accepted answer will rarely work if you have an issue with the CDN (content delivery network—the caches/mirrors around the world containing the apt lists and packages). It will work if a) you are using a PPA or local mirrors or b) have just a single mismatch to resolve.

Note: if you have the specific error message given in the log in the question above, the accepted answer should always work. But there are several other questions that have been closed as duplicates of this one where the accepted answer is insufficient.

It doesn't hurt to try, though, so start with:

This might be sufficient to proceed with sudo apt-get upgrade or other follow-up commands.

You may get "Hash sum mismatch" errors from that command, too. If this happens, run:

It is possible that even this command will throw "Hash sum mismatch" errors, because the issue can come from transient network content errors. If so, continue to re-run the above --fix-missing command until it completes successfully. For example, like:

(It should make progress with each run of apt-get update --fix-missing; if successive runs are not reducing the errors towards zero, press Ctrl-c to interrupt the loop. Then go back to the beginning of this answer with removing the contents of /var/lib/apt/lists and try again.)

After this, the update may work, but to be sure, first run apt-get clean, as so:

Note that if you're doing this in preparation for an apt-get upgrade, it is possible (even likely, if you had enough mismatches to require updating several times) the upgrade will fail with "Hash sum mismatch" errors of its own. If so, add --fix-missing to your upgrade command:

and try again. (apt-get upgrade with --fix-missing will also try holding back failing packages and continuing others, so you should see some additional progress from running this at least once.)

But if it still doesn't work...

Like the earlier until sudo... command, you may get some further progress by repeating this command (always preceded by the clean command above), which you can even automate with

but, usually, it will upgrade most of the upgradable packages the first time you run it with --fix-missing and after that get stuck on the same packages, making no further progress. At that point, you'll need to go back up to the beginning with the sudo rm -rf /var/lib/apt/lists/* and try again. It is worth trying this whole process two or three times, especially if you have dozens or hundreds of upgradable packages.

The following commands may solve your issue.

it will solve your problem. I also faced the same problem but the above commands solved the problem for me. So give them a try.

I had the exact same problem and all solutions provided using the terminal did not help.

For me, it was by going into:

It starts reloading the repos and updating. When I enter:

I don't know that it's proper solution or not, but I did the following and the error message's gone:

After typing sudo apt-get update in terminal, it gives me the names of some packages which cause the error then I did the following:

After pressing the "close" bottom, update manager started to check for update automatically again and I saw this message:"the software on this computer is up to date. Last checked 2 seconds ago."

I had a similar problem and solved it by opening theh application "Software & Updates" and, in "Ubuntu Software" tab, changing the value of "Download from" (in that drop-down list, try to select, for example, Main Server if it was not like that).

If you're running Linux inside VirtualBox on Windows and have Hyper-V (or WSL 2, which uses Hyper-V) enabled at the same time, you're in for a world of pain. This being one symptom. VirtualBox 6.1 says on the tin that it supports Hyper-V but it just isn't true (as of 2020-08-25 windows v2040 at least). Disable Hyper-V and you're golden. From another answer:

In an elevated Command Prompt write this :

I had the exact same problem and all solutions provided using the terminal did not help.

For me, it was by going into:

Settings → Software & Updates → Other software: Uncheck all the boxes and press close.

It starts reloading the repos and updating. When I enter:

As follow @robie-basak, I used apt-cacher-ng as mirror caching. So I Remove the proxy and the problem solved.

I remove the proxy in file /etc/apt/apt.conf.d/01proxy:

I had just recently install Ubuntu 17.10 and was getting the same error of Hash Sum Mismatch for a some repository.I went to Software and Checked Source as shown below and there were no problems further for downloading repository from the terminal. 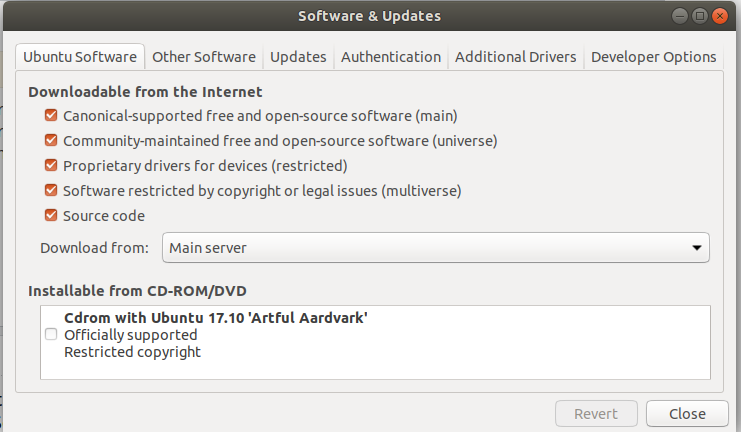 This can happen if you're running a router with parental controls, and havent put your raspberry pi into an "unmanaged" list. For me, I could see the url was redirecting to a circle domain, managed by the router.

So I just added my pi to the unmanaged list, and it worked fine.

I have resolved all the packages not being installed by running this command:

For each of the packages. They are now installed and the "Hash Sum mismatch" error has gone.

I faced the same problem in my Ubuntu 18.04, below is my practical experience:

This happened for me on Ubuntu 16.04, and none of the top voted solutions worked. The solution was upgrading packages:

Not sure if cleaning old lists (sudo rm -rf /var/lib/apt/lists/* and/or sudo apt-get clean) helped or not! Use them if necessary.

11
Update Manager Error - Authentication Error
3
How do I upgrade Virtual Box?
0
Step by step guide to install web Apps Feature in Ubuntu 12.04 with screen-shots and steps till end
0
My package manager is broken, index files are missing