Ubuntu 13.10 on Thinkpad slows down dramatically when power adapter is plugged in

When I plug in my power cable -- sometimes -- Ubuntu 13.10 immediately slows down in just about every way. This has been happening for months, but I only recently finally connected the dots, in part because it does not happen in all situations. However, when it is a problem, I can create it 100% reliably by unplugging and plugging my laptop back in.

Here's the output of dmesg immediately after plugging in:

There are no relevant messages when I unplug.

I can't spot any meaningful patterns in top or htop before or after plugging in. The latency particularly affects nautilus, Chrome, and the desktop (Alt+Tab-ing, etc.).

I have both an Nvidia card and an integrated card, but I have Optimus disabled. This slowdown effect occurs no matter which card I currently have enabled.

Here are the Power settings I had in my BIOS when I wrote this report: 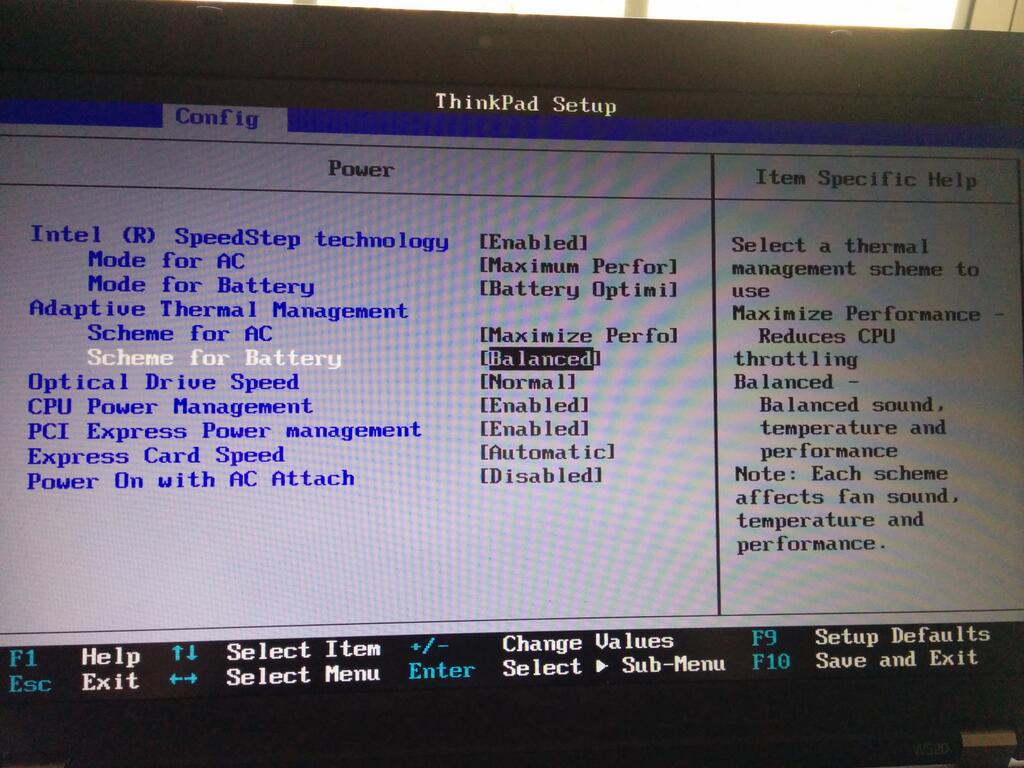 I haven't found anything that isolates and talks about this on Ask Ubuntu or Launchpad or the Internet. The closest thing is this thread on 11.10, which might be the same, but it's unanswered, and I don't see the same CPU patterns (though it's possible my 8 cores make the CPU changes less noticeable). What's going on?

Edit: removed some lines about the Thermal Table, added the photo and more details about BIOS changes I've made since then.

After a long story which began with the same analysis as you told - power cable plug in => slow down the system - I found a solution and another better reproducible situation which works for me.

After waking up the system from suspend to ram the system is remarkable slow. I checked after a tip of a colleague the cpu frequency and the set governor. But the governor was set to performance (watch -s 1 'cat /sys/devices/system/cpu/cpu0/cpufreq/scaling_governor') and all cpu seems to run with full MHz. (watch -n 1 'cat /proc/cpuinfo | grep MHz'). It seems that this information is not really reliable. After setting the governor to e.g. ondemand and than back to performance the system runs again as expected: fast!

For me the suspend to ram thing is a reproducible situation where the system slows down. But I think there are maybe also some other situations like the power cable - sometimes. And I had also a situation where the governor was automatically set to ondemand if I put some load to the cpu. Only a restart of the system stopped this behaviour.

I have a (seemingly) very similar issue on a Lenovo ThinkPad T61: (sometimes) when the laptop is plugged-in, it is very slowish. I plug-out the adapter, and the slowness stops.

Here I notice the following symptoms:

I tracked it down to the following: it looks like the kernel is being under a shower of IRQ interrupts, possibly due to faulty behavior at driver level in the kernel. Apparently this is a known issue related to ACPI interrupt calls, but obviously it hasn't been fixed yet in the kernel for specific hardware (like ours).

This said, I'm still hoping for a nicer solution to this issue. The workaround is aggravating. Does it help?

We had the same problem (on a T520), and thanks to Honza's answer, we found that using a 90W adapter instead of the 65W adapter fixed the problem for us too (thanks!).

After some googling, I found an explanation here: http://linux-thinkpad.10952.n7.nabble.com/WARNING-Lenovo-ThinkPads-and-65W-power-supplies-td13173.html

Basically according to this post "the 65W power supplies alone are NOT sufficient to power the notebook in all scenarios...and the firmware knows this."

The post seems to imply that if your battery is charged then the performance won't be throttled because it can draw on both the 3.25A supply and/or the battery to supply a peak load without being underpowered, but if your battery is not present or not charged, then the cpu frequency will be throttled as a safety measure if it determines that your supply is underpowered.

I'm having similar problem with Lenovo ThinkPad L540 - on battery FPS in 3D game are around 70, when on AC power, FPS drops to 20. Finally I've found why.

Have a look at the power adaptor. I have output 3.25A. I tried to plug 4.5A and the problem dissappeared!

Sorry for posting in "Ubuntu" forum since I have W8 :-) But I think that doesn't change anything.

Not the answer you're looking for? Browse other questions tagged 13.10 power-management thinkpad dmesg or ask your own question.

190
Kworker, what is it and why is it hogging so much CPU?
39
Setting to High Performance
5
Lenovo ThinkPad L520 slows down when AC power adapter is plugged in

5
Lenovo ThinkPad L520 slows down when AC power adapter is plugged in
3
13.10 Laptop goes to sleep instead of shutting down when lid is closed
1
Ubuntu 13.10: Improving Power Consumption (Thinkpad T530)
1
My computer shuts down suddenly
0
What is the average +/- % for the battery Power estimator?