Is there any way to integrate Dropbox in the messaging menu like ubuntu one?

Well, what the title says : is there any way to integrate Dropbox in the messaging menu like ubuntu one ?

Edit: Below is an image showing where Ubuntu One is on the messaging menu That is where I ask if I can put dropbox, NOT on the panel itself. 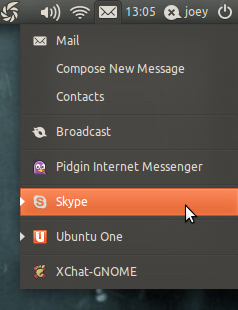 dropbox messaging-menu
Share
Improve this question
edited May 12 '11 at 21:17

It is not possible (as far as I know) to move DP from its standard place in the traybar to the message menu. You can only add a shortcut in Message Indicator menu:

In the editor, type following text and save:

Dropbox 1.0 has support for the App Indicators

If you'd previously installed Dropbox, it's likely that the Dropbox daemon hasn't updated, which is part of why you don't see the indicator. To force the update, do this in a terminal window within GNOME:

You should then get a pop-up window prompting you about updating Dropbox.

Not the answer you're looking for? Browse other questions tagged dropbox messaging-menu or ask your own question.