I have set up a remote drive for storing my photos. I connect to the drive using "Connect to Server" in Nautilus. This works pretty well and even the preview images are loaded if I edit the Nautilus settings to show the preview always.

It just is pretty slow to get the previews so I thought if there is way to generate the preview image on the remote drive and make Nautilus to show that instead of downloading the whole image and then self generating the preview?

I'm connecting to remote server using ssh and this works for me.

Nautilus (my version 3.8.2) saves it's thumbnails in ~/.thumbnails and ~/.cache/thumbnails. By default it shows thumbnails only for local files, but you could change it in preferences. 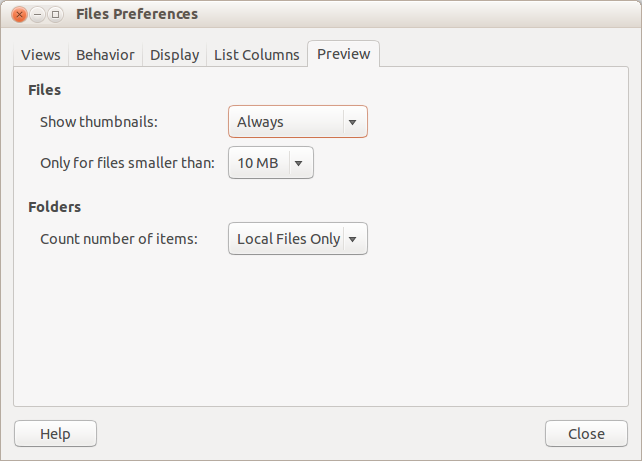 And if the mount point for you remote server is the same, nautilus saves those thumbnails.

And this I haven't tested.

Generating nautilus thumbnails on the server is possible, cause nautilus use libgnome-desktop library that has it's own API. To generate thumbnails you could use script from this answer

But the problem is that nautilus doesn't support adding extra thumbnails paths(or just I haven't found) and the only workaround I see is to make another script that will copy those thumbnails from server to local thumbnails folder, but it sounds really crazy.

On Ubuntu 16.04 using Nautilus 3.14.3 I don't have any preferences menu for Nautilus (I'm using Gnome in XMonad). Running the command

in a terminal turned on image thumbnails for USB drives. (That command sets the preferences without needing a preferences menu).

36
How can I instruct Nautilus to pre-generate thumbnails?
0
How to mount network drive so that it can be used from applications and on wifi
1
Why Evince is not generating thumbnails for .ai files in CDs or Pendrives?

1
Nautilus stops working
0
How to mount network drive so that it can be used from applications and on wifi
0
How to remove the preview image on video and picture files in folders?
3
Jpeg preview in Nautilus
0
why are jpeg previews included with each photo in the directory?
1
Can't get video thumbnail previews working for a samba share (Dolphin/Nautilus/Nemo)
1
Image preview only in desired folder