When running 13.04, I used Audacious as a music player, with the "Desktop Notifications" plugin set up to display the current track, album name, artist name and album art whenever the track changed. This would appear as a notification in the top-right, similar to if a command was sent using notify-send. Since upgrading to 13.10, though, the notifications have stopped using the notifier, and instead pop up with a grey box with the track details in the background as below.

I don't know what changed in between Ubuntu versions (this has been ever since I upgraded to 13.10, never saw anything like it before).

I've tried playing around with the Song Change function, putting notify-send "%T" "%a\n%b" as the command to get the track details at least (%T is the track title, %a is the artist and %b is the album title), but there doesn't seem to be any way of displaying the album art at all (the filepath to the album art isn't listed as a possible variable, only the path to the track -- and even though I have them all stored as /path/to/album/Folder.jpg, using dirname to extract the folder and adding "Folder.jpg" doesn't seem to work.

The command I'm trying is notify-send "%T" "%a\n%b" -i "$(dirname %f)/Folder.jpg", but this doesn't work. If I do similar in a shell window, but explicitly put path/to/file.mp3 instead of %f it works - I assume this is because of how the %f variable is being expanded; but no permutation of double and single quotes around various parts seems to work properly.

Is there any way of restoring the old behaviour, or getting the new command to work with finding the album art at least?

EDIT: From a little bit of testing, it seems that the notification box could be being generated by something along the lines of notify-send -t 0 - a zero timeout seems to send a box like this by default (cf. https://wiki.ubuntu.com/NotifyOSD#org.freedesktop.Notifications.Notify). I don't really know why this would happen starting with 13.10, but if anyone knows a way of taking this out of Audacious (short of changing source code and recompiling) I'd love to hear it; or maybe this would belong better as a bug report?

Recent versions of Audacious added the "Pause" and "Next" button to the notification. The problem is, for some odd reason, Unity will display any notification that has buttons as a message box, like you are seeing. There is a setting you can change in Audacious to hide the buttons and get the old notification style back. Go to File -> Preferences -> Plugins -> General -> Desktop Notifications -> Preferences and uncheck the "Show playback controls" option. Make sure that "Always show notification" option is also unchecked. 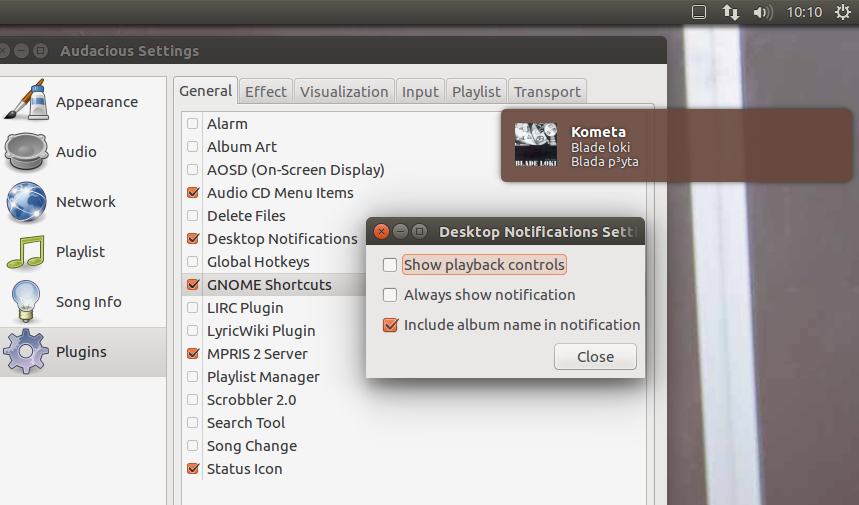 Not the answer you're looking for? Browse other questions tagged 13.10 music notification audacious or ask your own question.