Is there any app for lubuntu which has ability to remotely turn on the PC and use it and then tun it off also. I want it as my computer is in NewYork and I want to access some files in my office at Canada. then how can i remotely tun on that pc and download some files. (the pc is always plugged in to mains but not turned on as it will waste electricity)

This is how Wake-on-LAN works; the target computer is shut down with enough power reserved for the network card to function. The network card listens for a specific packet called the “Magic Packet”. The listening computer receives this packet, checks it for the correct information, and then boots if the Magic Packet is valid. A magic packet is data consisting of “FF FF FF FF FF FF” followed by 16 repetitions of the listening network device’s MAC address.

In order to use WoL it must be supported and enabled as necessary in the BIOS, NIC and other network hardware (routers, switches etc). You may also need to configure some software if things don't work out-of-the-box.

Enabling WoL in the BIOS

This section may differ depending on whether or not you have a NIC integrated into your motherboard.

To enable WoL in the BIOS, enter the BIOS setup and look for something called "Wake up on PCI event", "Wake up on LAN" or similar. Change it so that it is enabled. Save your settings and reboot.

If your NIC is not integrated into your motherboard, you will still have to configure your BIOS to allow devices to wake up your computer. Boot your computer and enter the BIOS settings menu. In one of the sub-menus there will hopefully be the option to allow USB and/or PCI devices to wake-up the computer. Enable the setting that is appropriate for your NIC. Save your settings and reboot.

PCI NICs sometimes require a cable connection to the power supply in order to stay awake when the computer is off/asleep. Check your manual to see if yours does and install if necessary

Enabling WoL in the NIC

First, determine which NIC will be used, and then check whether it supports the Magic Packet™ using

where is the device name of your NIC, e.g. eth0. This command will output some information about your the capabilities of your NIC. If this output contains a line similar to the following:

where contains the letter g, the NIC should support the WoL Magic Packet™ method (for the other letters look at man ethtool).

Enabling WoL in the NIC

To check whether WoL is enabled in the NIC, one could use

If contains g and not d, then Magic Packet™ is enabled. However, if does contain d, WoL needs to be enabled by running the following command:

On most systems, issuing this command is required after each boot. If the system's networking is configured via ifupdown, then it is easy to add the line up ethtool -s wol g below the interface's configuration stanza in /etc/network/interfaces. For example:

This will ensure that WoL is enabled in the NIC on each boot. Fore more information see the interfaces manual.

Tools to help set this up, configure and/or use: 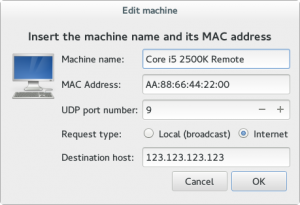 Images from ubuntugeek and that site also has a summary:

If one or more of these requirements is not met all the time, the Wake On LAN will not work.

First install an ssh server on the remote machine you want to access:

You will also need to install a program to download stuff, if it is not already installed:

Get another machine on the same network, running Ubuntu, and try sshing into the remote machine

You can also 'ssh' from Windows, Mac etc, but you can find out how to do that of the internet - sorry.

The USERNAME entry is your username on that computer - you should see it when you open terminal, before the @.
The IP address you need to use now is your local IP on that machine - see here on that.

If it works, you may want to run a test download. First change the terminal so it is in the `~/Downloads directory, so anything downloaded will end up in that folder.

Then you can try downloading this image:

You can then shut it down by using:

To copy files from that computer to another, use the test machine to try this again, in nearly exactly the same way as with the ssh command earlier, and will be tested with the file downloaded via wget:

This will copy the file through ssh to helloworld on the test machine.

After you have tested it on the local netowrk, you then need to access it from outside it. First set up port forwarding on your router . This means that any request sent to the router will be diverted to your machine. Get it to be sent to the local IP address of that machine, allow SSH, etc.

After that, run this to find the external IP of your network:

Then you can test it. For this you need a machine outside your local network, for example an Android phone with ConnectBot on it. You can use it as explained earlier, but this time with the external IP address.

4
How to remotely enable connecting to the main desktop
0
Lubuntu 11.10 wifi flickering on & off
1
Booting impossible cause GRUB rescue won't let me
1
remote control a download manager
1
Lubuntu allow non-admin to mount drive without admin password
2
remote desktop from windows10 to ubuntu without log out
0
Desktop is black, not visible (Lubuntu 20)