Unable to set a shortcut to grab screenshot area

I currently have Ubuntu 13.10. At some point the default shortcuts Shift+Prn and Ctrl+Shift+Prn stopped working.

Simply pressing Prn (captures the entire screen) works, pressing Alt+Prn to capture only active window works as well, only the shortcut for area clipping doesn't work for some reason.

Here's a screenshot of my keyboard settings: 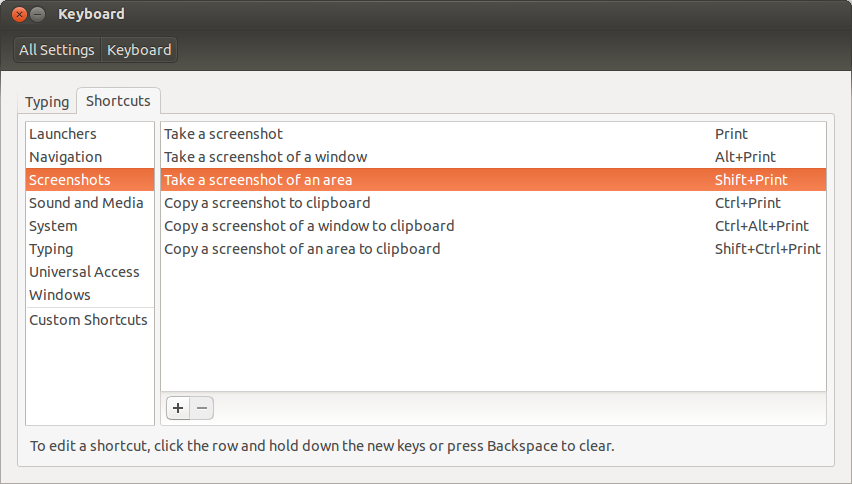 P.S. In CompizConfig Settings Manager, the Commands plugin is turned off

UPDATE @falconer's answer has helped locate the problem, here's the output of a script that simulates key presses and dumps programs that intercept them:

It's obvious from this log that in my case it was xneur (keyboard layout switcher program).

I made up a series of commands to show us the passive grabs on a keystroke. While the Take a screenshot of the area setting is set to Shift+Print please run this command and post its output.

This will trigger Shift+PrtSc keyevent and should show gnome-settings-daemon grabbing the keyboard.

Please also check if maybe some modifier key is activated on your keyboard and maybe somehow it is interfering with this keycombo. (e.g NumLock, ScrollLock, or some similar keyboard specific thing) Try out the combo with turning those modifiers on/off.

Not the answer you're looking for? Browse other questions tagged gnome keyboard shortcut-keys screenshot or ask your own question.

130
How do I set a shortcut to screenshot a selected area?
15
How to find *why* I can't bind some keyboard shortcut (or which app took it)?
3
How to get a complete list of grabbed keys on Ubuntu 18.04?