Ask Question
Asked 6 years, 9 months ago
Active 6 years, 9 months ago
Viewed 61k times
2
This question already has answers here:
Ubuntu does not offers me “install alongside Windows” [duplicate]
How do I install Ubuntu alongside a pre-installed Windows with UEFI? (12 answers)
How can I install Ubuntu without removing Windows? (9 answers)
Closed 6 years ago.

I have a Dell Inspiron 5520 (8GB Ram, 1TB HDD) and I have installed Windows 8.1 x64 on it. I want to install Ubuntu and dual boot Windows 8.1 with Ubuntu but I can't (my problem isn't the dual booting process, which I can fix later using EasyBCD), Ubuntu won't install.

When I boot from the live CD I have no option to "Install Ubuntu alongside Windows 8" and when I choose "Something else..." it shows me my partitions which are all used by Windows (System reserved, reserved, etc..) and the one partition that I wanted to install Ubuntu on is "unusable". My disk is MBR and I think the problem is having more than 4 partitions. I created another Local Disk from inside Windows but Ubuntu just sees that drive and the drive I shrinked to make it as one partition.

So, right now I want to install Ubuntu without killing my Windows (if it's possible). Perhaps there is some way I can make an extended partition and use that but I don't know how to (I can shrink one of my drives but that wouldn't make a new partition would it?).

Here is a screenshot of GParted in Ubuntu: 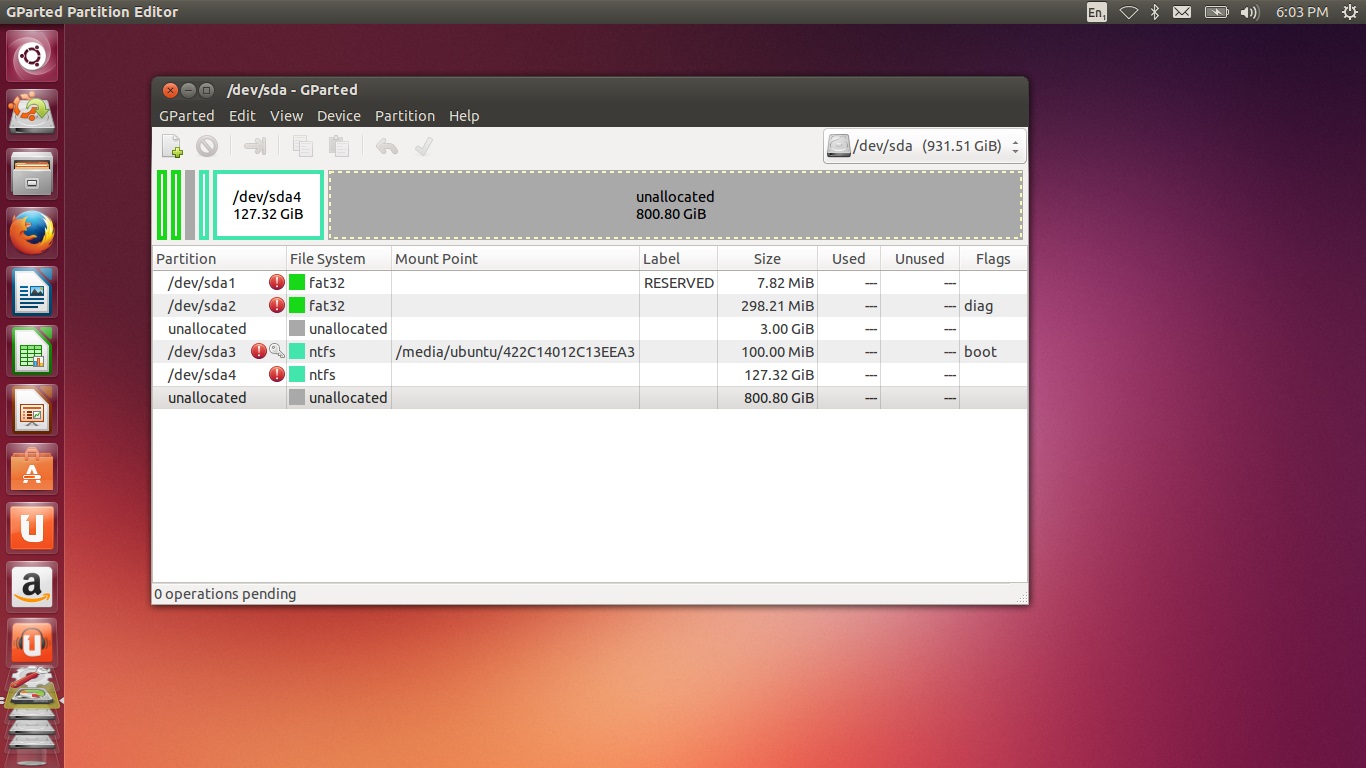 Also, when I right-click on that 800 GB partition and click on "New..." it gives me this error: 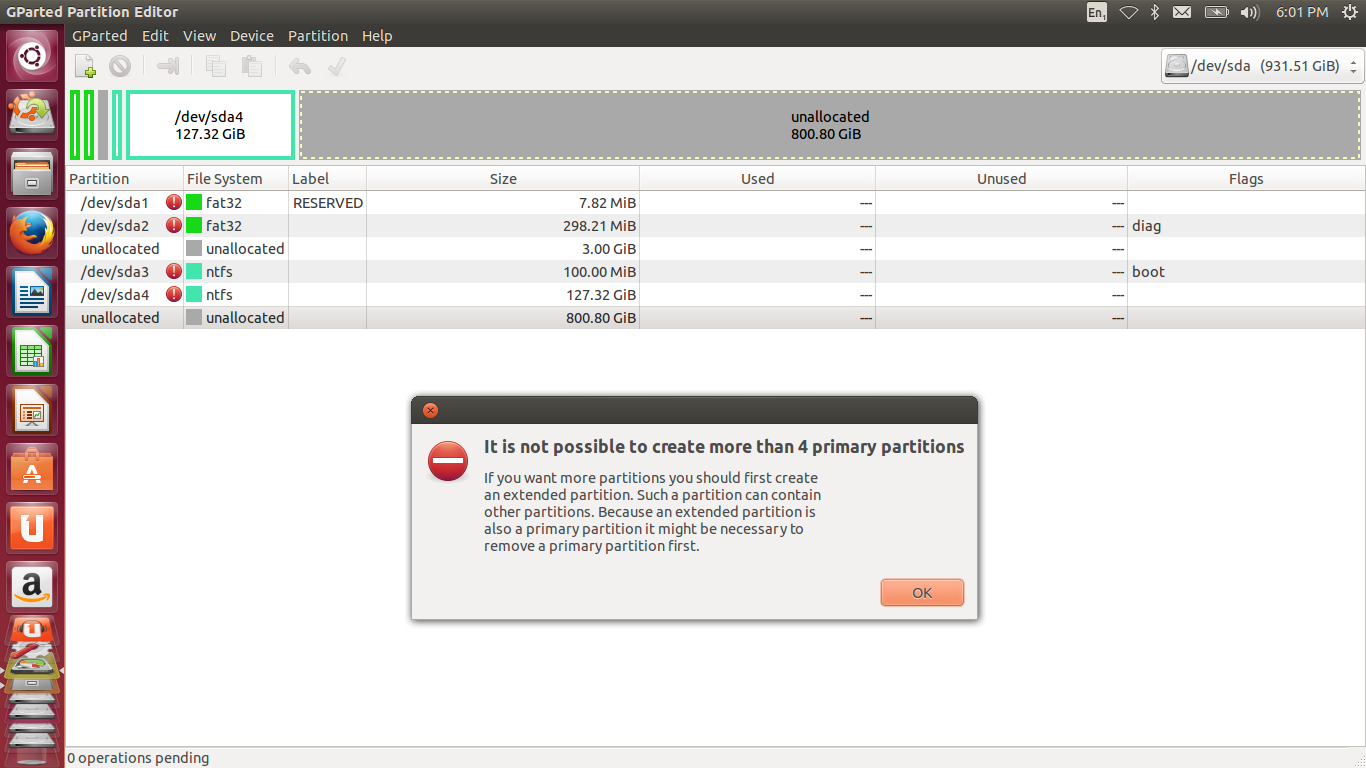 Which makes sense and is exactly what I'm trying to do but I don't know which partition I can remove so that my Windows doesn't break. Also, I don't know how to create an extended partition as I haven't done it before so I guess I would need help with that.

EDIT: Here's a screenshot of the Warning descriptions beside the partitions: 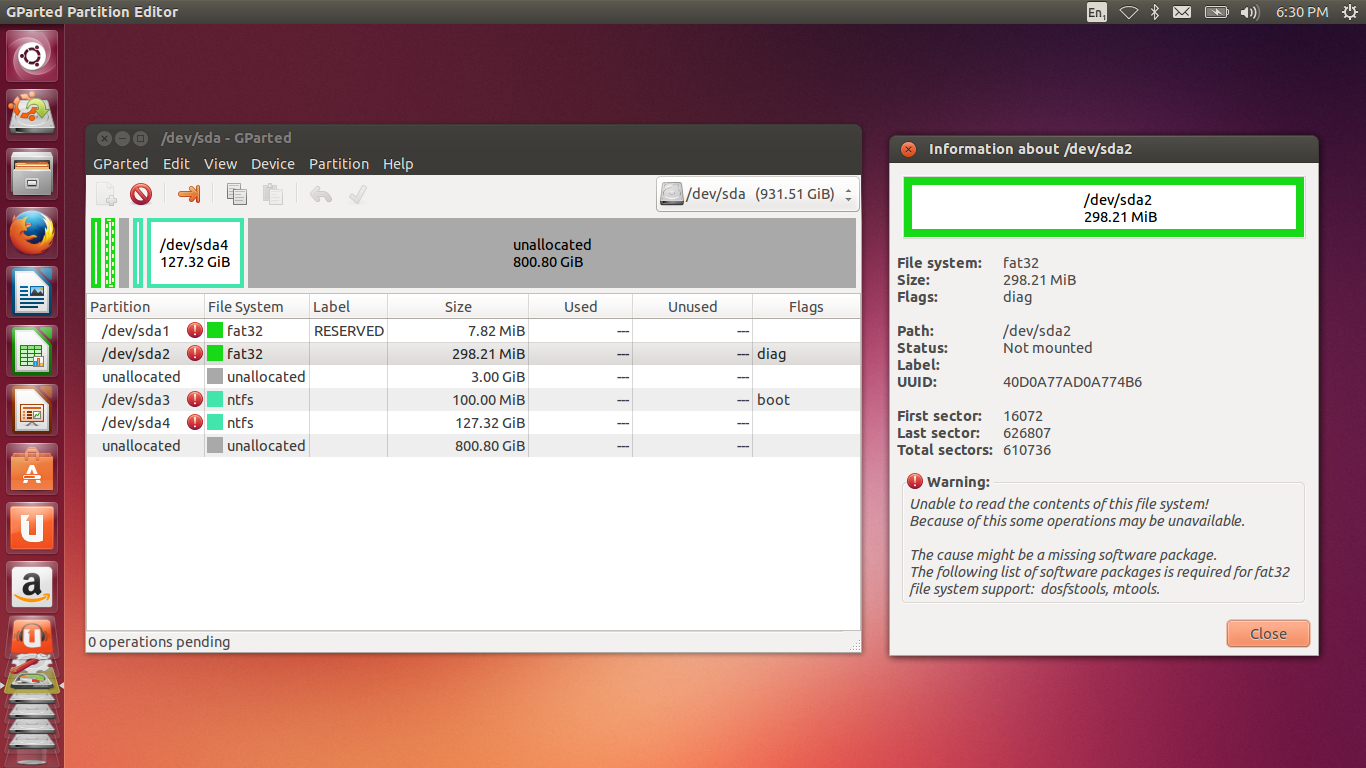 For the NTFS partitions the description is the same apart from that last part which instead has written:

Second, you should never create a partition in Windows that you intend to be used by Linux. You seem to have gotten lucky and didn't do any damage, but many people who do what you did end up having to use third-party utilities to fix the damage -- when asked to create more than four partitions, Windows will, unbidden, convert from a standard partitioning setup to a Logical Disk Manager (LDM), aka dynamic disks, setup. You can't install Linux to such a disk, so you've got to undo this operation, which of course can't be done with the tools that Microsoft provides.

If you intended to install Linux to one of your existing partitions, then I recommend you:

If, OTOH, all four of your existing partitions are in use by Windows, you could do the same as I've just described, but for step #1, delete a partition that you're willing to sacrifice (because it's empty or because you transfer its data to another partition). If that's not possible, try this:

Before undertaking either of these tasks, back up any important data on your disk. Partitioning operations are inherently risky, and the sorts of things you need to do run the further risk of disrupting the Windows boot process. Moving and resizing NTFS may be a little safer in Windows than in Linux. This is especially true when you're dealing with a partition that boots in BIOS mode.

According to your second image (On that image Windows already create 4 Primary Partition under MBR disk) it's impossible to create more partition. so i have some suggestion which both require to delete your entire HDD

2.Delete your entire HDD and re-format it under GPT Partitioning Table.So theoretically you can create unlimited of primary partition.But if you want to use this your BIOS should support UEFI and you should use Windows 64-bit installer also (not also the OS but also the installer)

sorry.only this that i can suggest to you

Not the answer you're looking for? Browse other questions tagged dual-boot partitioning windows or ask your own question.

565
How do I install Ubuntu alongside a pre-installed Windows with UEFI?
69
How can I install Ubuntu without removing Windows?
3
Ubuntu does not offers me “install alongside Windows”
0
Windows not booting after boot-repair
0
Backing up a HDD using dd
0
How to install ubuntu alongside windows?
1
Replace Windows 8.1 with Ubuntu Keeping Data in Different Partition
0
Screwed up Partitioning, Can't boot into live session, Grub installed wrong
-1
Can't boot on Windows 8, with triple boot
0
Black screen , os not booting
See more linked questions