I used the steps showed in the question here.

It installed successfully but later on I got error

I found out that this is due to the wireless adaptor I installed I switched back to ethernet card and I didn't got that error again. Now my question is how can I make my wireless card work in Ubuntu 12.04. Will I have to update my kernel and how can I do that. Thanks.

Got the solution to my problem for all those who are facing the same problem here are the steps I followed:

You need to connect ethernet interface of the system to the internet to install the necessary packages. I believe you have a working internet connection then follow these steps: 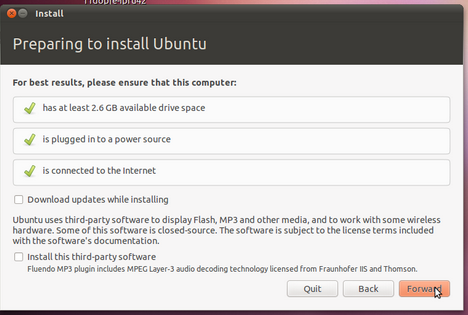 2.After installation has finished you will be presented with default kernel of Ubuntu 12.04.

So, now install the kernel version 3.6.11 get its packages from the link below:

Download the kernel files from above link then install the files using the command:

Your system will reboot now if everything done right you will no be running kernel version 3.6.11 you can check it by the command uname -a

3.After successfull installation of linux kernel 3.6.11 when you will check in the networks it will show an error stating Firmware missing

Get the ralink rt3290 firmware using the command:

then copy the firmware

After the reboot has finished your wifi should be working now and without any kernel panic errors. This solution worked for me in Ubuntu 12.04 hope it helps others as well.

Not the answer you're looking for? Browse other questions tagged 12.04 wireless drivers kernel ralink or ask your own question.

2
Can't enable Ralink RT2561/RT61 wireless card
1
Problems with the Drivers for Ralink RT3290 Wi-Fi Adapter
1
Ubuntu 12.04 LTS with Ralink RT3290, are monitor mode and packet injection supported with rt2800pci that came with the distro?
1
ralink rt3290 driver module not launching and I can't figure out why
0
Ralink RT3290 WiFi card not working on Ubuntu 16.04
1
How to install Ralink 3290 Wireless Card Driver “correctly”?