So I had a Ubuntu 13.04 installation and I had encrypted my hard drive while I was doing installation. I was playing around and mistakenly deleted all the partitions, now I downloaded lUbuntu 13.10 x86 Desktop but when I am trying to install it says "Unsafe swap space detected" 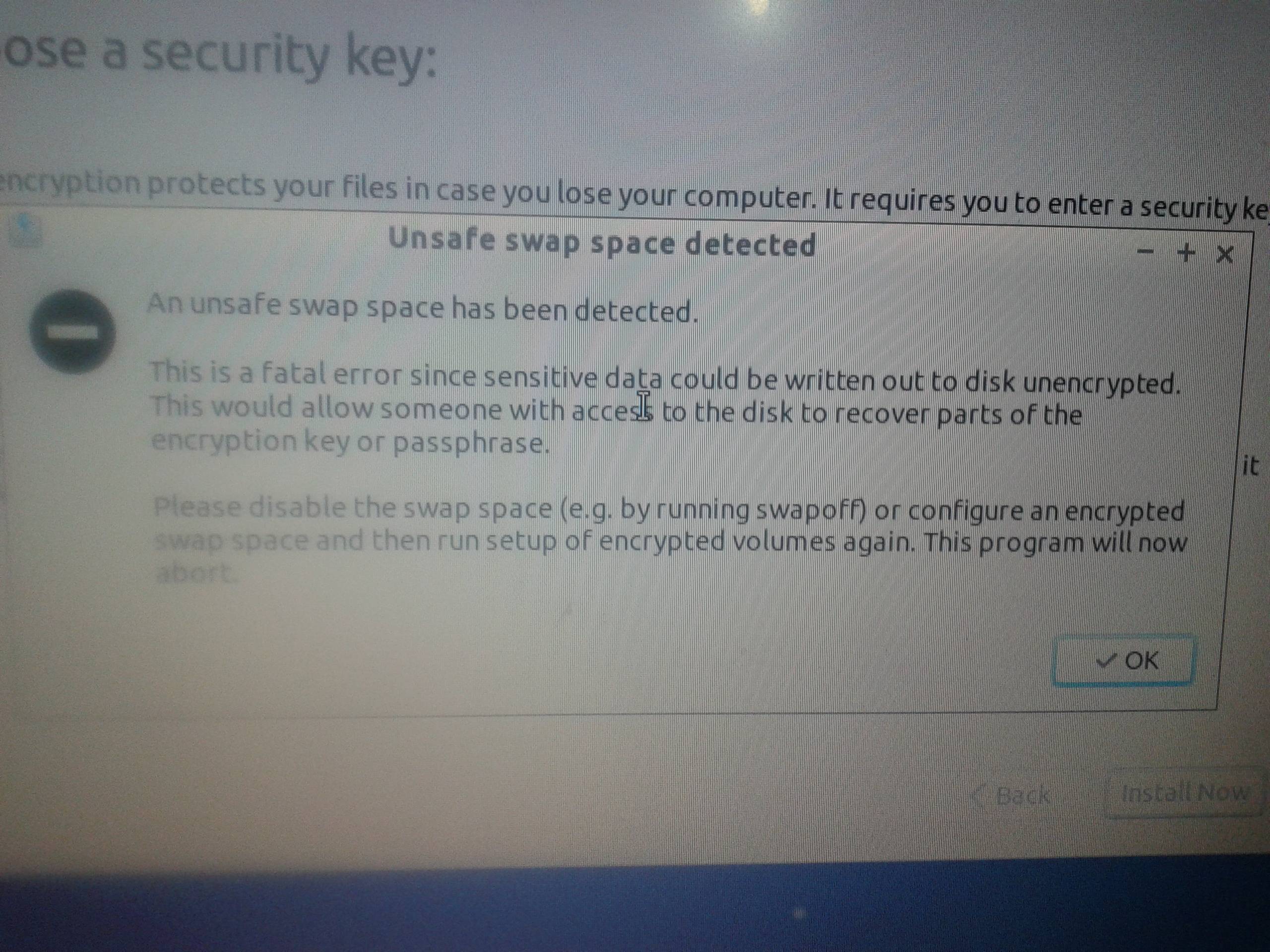 I am clueless on how to fix this error.

Try to boot via "Try Ubuntu" instead of "Install Ubuntu" and run the command:

From the terminal. (ctrl+alt+t)

Then run the Install Ubuntu from the desktop. The error should stop appearing.

Len's solution of running sudo swapoff -all is possible without booting via "Try Ubuntu".

When you get the error, use CTRL-ALT-F1 to get to a terminal and run the command there.

Use CTRL-ALT-F7 to return to the graphical environment when you're done.

It worked for me. I did so after going back to the language selection screen, but it may work from the partition manager stage. I would expect the check is only being done at the moment one attempts to change a partition.

I had the same problem, there's definitely something wrong with the installer (I was trying to set up 14.04 with encrypted partitions on different drives, with / on my small SSD and /home /usr /tmp /var and swap on my HDD). But I played around with it, restarted the installer/rebooted a number of times, and here's how you work around it:

Set up all your actual partitions, including your encrypted containers. I believe it necessary to include an encrypted partition for swap, so make sure to make one of suitable size for it.

Once you have them all set up, THEN, and only then pin them to actual mount points. I started with swap and then moved on to /home and so on.

It is this Bug That still exists in Lubuntu 14.04.2 Desktop i386 version. That's what i've tested - maybe this safe's some other people's nerves.

I got it working using the alternate-cd (14.04.1 i386) but there you need to make sure to select the "Install" method - not the "expert install" and not "install lubuntu" and when grub asks you to install to MBR say "No" because that is another bug and you will then be given the option to specify the correct device to install grub to.

Made a detailed answer specified for 14.04 now: Link

Not the answer you're looking for? Browse other questions tagged system-installation swap ubiquity or ask your own question.

16
Is my Swap (cryptswap) partition working properly?
2
Can you use an SD card for swap in Ubuntu 12.04?
1
"Failed to create swap space" error during installation
1
Unable To Install Grub/EFI For Lubuntu
0
setting up swap space on a triple boot system?
2
Swap Space Allocation Problem
27
Allocate swap after Ubuntu 14.04 LTS installation
0
Swap Partition: What to do with two different swaps, one of them encrypted?
2
Issues installing encrypted lubuntu 17.04 64bit