So i'm trying to install Ubuntu on my laptop, it seems to work fine until it tries to install grub. I haven't seen progress the past hour and this is the second attempt.

I'm trying to install 13.10, using a Linux Live USB. I don't care about the contents of the laptop.

I've been trying to find instructions about installing grub before starting the installation, hoping that would solve my issues, but I came up empty.

I hope anyone knows how I can find out why it is happening.

During the installation, there's a way to skip installing grub. Look at the "Device for boot loader installation" dropdown.

Instead of choosing the entire device "/dev/sda", choose the partition you'll install Ubuntu, such as: "/dev/sda1" 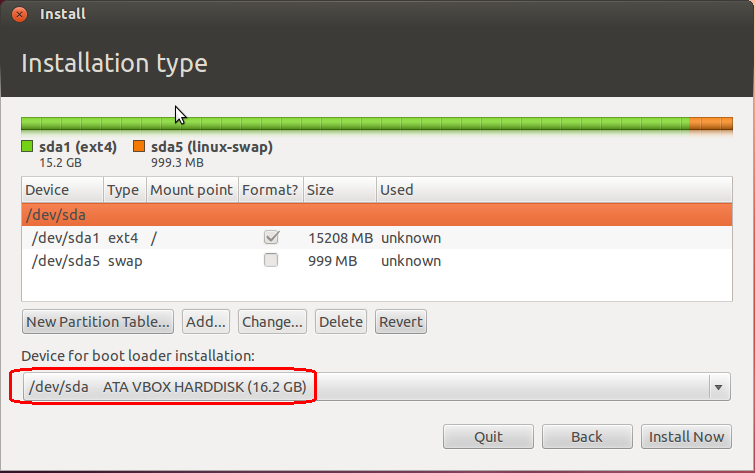 If you choose "dev/sda", you're supposed to rewrite the boot record for the entire drive, which I believe is what's your issue is all about.

But when you choose "dev/sda1" (or sda2,sda3...) you get to place the boot flag at the beginning of the partition, not the entire drive. That does not make you go for a change in your bootloader. In other words, you place a boot flag as a "subtitle" to your pre-existing bootloader.

If all else fails, try to "rewrite your MBR" because during your uninstallation of Windows, its boot sector may have accidentally remained there. Since you are doing a fresh install of Ubuntu, this may stand as the final option since there's a small chance that Ubuntu failed to handle your Windows partition's boot flags correctly.

In case you have issue when installing on UEFI BIOS (not sure if this issue is adressed only to Acer Laptops) there is a topic here that helped me solve this issue.

I will copy the commands in case it disappears, but all credit goes to Pueseso from Acer Community forum.

0
Installing Ubuntu on Asus A43SM
0
Ubuntu 12.10 Install Issues
4
Bootloader question with the default “Install ubuntu along Windows” option
1
need to re-install grub2 to /boot pbr (not mbr). Use live cd and the grub-install?
5
are there any mirrors for boot-repair-disk-64bit.iso?
0
Installing Ubuntu 13.10 'Saucy Salamander' on L75D-A7280 hangs on a black screen
0
update to Ubuntu 20.10 failed due to Package dependencies cannot be resolved: grub-efi-amd64-signed
0
Why does GRUB2 hangs on attempt to install Ubuntu on Windows SSD with UEFI