When running intensive apps like blender my CPU can get up to 80.C I can manually underclock the CPU from the BIOS but I would like to have my pc detect when the CPU temp gets too high and slow things down until everything cools down. Is there a way to do this automatic or even a manual way to slow the CPU down from ubuntu

From (wiki.debian.org -thermald) there is Debian's (Ubuntu's) write up about thermald A Linux daemon for cooling tablets and laptops. This only works for Sandy Bridge (2nd generation) and newer Intel Cores. Once the system temperature reaches a certain threshold, the Linux daemon activates various cooling methods to try to cool the system.

It operates in two modes:

TLP brings you the benefits of advanced power management for Linux without the need to understand every technical detail. TLP comes with a default configuration already optimized for battery life, so you may just install and forget it. Nevertheless TLP is highly customizable to fulfill your specific requirements.

Please read the full Arch Linux TLP link above. There are issues with Nvidia that require configuration changes.

After many trials and errors with other packages, I've had great success using TLP. It gives superior fan control and works seamlessly with thermald and p-states.

As these installation instructions for Ubuntu 15.04+ mention TLP not only reduces overheating but it extends battery life too.

Since installing TLP, Powerclamp (described below) has never been invoked again.

Intel's Powerclamp driver is defined here (kernel.org - Intel Power Clamp.txt) and is part of thermald described above. A direct quote for Powerclamp from the link:

Consider the situation where a system’s power consumption must be reduced at runtime, due to power budget, thermal constraint, or noise level, and where active cooling is not preferred. Software managed passive power reduction must be performed to prevent the hardware actions that are designed for catastrophic scenarios.

On Intel CPUs, C-states provide effective power reduction, but so far they’re only used opportunistically, based on workload. With the development of intel_powerclamp driver, the method of synchronizing idle injection across all online CPU threads was introduced. The goal is to achieve forced and controllable C-state residency.

Test/Analysis has been made in the areas of power, performance, scalability, and user experience. In many cases, clear advantage is shown over taking the CPU offline or modulating the CPU clock.

How do you know Powerclamp is running?

Powerclamp might only show itself once a year when your fan vents get too much dust & lint. So how do you know it's actually running in the background? Use:

And you should see a list similar to this:

If you see intel_rapl and intel_powerclamp you know it's working and simply waiting temps to exceed 85C.

Powerclamp in action displayed by Conky

Here is a screen shot when Powerclamp injects sleep cycles:

Normally on this system CPU clock speed is 2400 Mhz to 3400 Mhz when watching HTML5 video and 10 Chrome tabs open. Normally CPU utilization is about 9% to 12% across 8 CPUs. When things get too hot (86C) Powerclamp kicks in and this happens:

The Powerclamp driver runs until temps drop below 85C again. While the driver is running you might have split second pausing in your videos and possibly split second keyboard and mouse lag.

To disable Intel Turbo Boost use:

Short term fix in this scenario

To "band-aid" fix this problem I pulled the old laptop cooler pad with dual fans out of the closet and popped under the laptop. This dropped temps to 63C under the same workload.

The next step will be compress air in vents. After that the final step will be new Cooling Heatsink with pipes for CPU and GPU. Good thermal paste such as Arctic Silver 5 is also needed in that operation. A new fan was already installed last year and that seems to be running ok.

Blew out fan vents with compressed air and temps dropped from 63C to 56C. This is still using the laptop cooling pad mind you.

Have been using TLP (described above) for many months now and temperatures are steady around 50C and fan performance is optimal.

Watch out for too many fan control drivers

Because this is a Dell I had installed I8K Fan Monitor / Control in hopes it would speed up the fan sooner and faster. When I type sensors I get:

Ignore the virtual temps, they are out to lunch. Under Ubuntu 14.04 the were accurate and I used temp 1 in Conky display. After Ubuntu 16.04 upgrade I had to refer to a third temperature not displayed on this screen. To see the REAL temps you can use this command:

I see the dell_smm_hwmon kernel module / driver. When I google that driver and I8K people report the two drivers cause system freezes for a split-second every 10 seconds or so. I was having this problem myself so had to remove I8K fan control.

There are lots of other utilities and cooling methodologies but this is getting TL;DR.

I created a program just for this problem. Limit your CPU based on a desired temperature. It runs like this:

That command will make your CPU cores slow down when they reach 80 degrees Celsius. When the temperature goes down, the CPU cores will be allowed to run faster again. You can find temp_throttle here.

To run the main script at startup with sudo and enter the password in gnome-terminal, one could create a small script :

(--geometry=45x15 opens a small terminal screen; --profile=hold uses a gnome-terminal profile called "hold" that has to be already created with the option "When command exits: Hold the terminal open", --hide-menubar hides the menus for that window)

After making it executable, this small script (let's call it temp_throttle_80.sh) can then be added to the startup list and you'll be prompted to enter password at startup; then, if the mentioned temperature is reached, its action is reported: 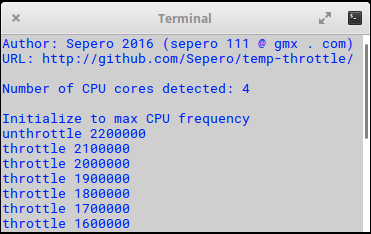 you can limit the CPU frequency , so that you can low down the frequency and it can control the Heat from CPU.

0
To much heat despite amd
677
How do I get the CPU temperature?
18
Laptop CPU+GPU overheating after update to 18.04 LTS
10
intel_powerclamp: Start/Stop forced idle injection
6
Bash script to sleep at given CPU temperature ~ update for 16.04
5
Processor caps at 800Mhz
6
CPU overheating in Ubuntu 18.04
8
Ubuntu 18.04 LTS hangs up every time with AMD GPU
4
Video drivers for Intel onboard graphic in 18.04 and thinkpad t410
6
Ubuntu 18.04 Steam games frame rate drop
See more linked questions

1
CPU performance decreases with AC power
3
T430 i5 overheating
0
CPU overheating on Ubuntu 16.04 (MSI GE40)
3
Ubuntu 21.04 - high CPU spikes when a mouse is moved
1
CPU temperature spike in 90c+ only when plugged in
0
CPU temperature high in Ubuntu, but not Windows