How to change the time server in ubuntu 12.04 LTS without installing the `ntp` package

I am on Ubuntu 12.04 LTS, in the dialog "Time and Date settings" there is a set of radio buttons labeled as "Set the time", the two options are "Manually" and "Automatically from the Internet": 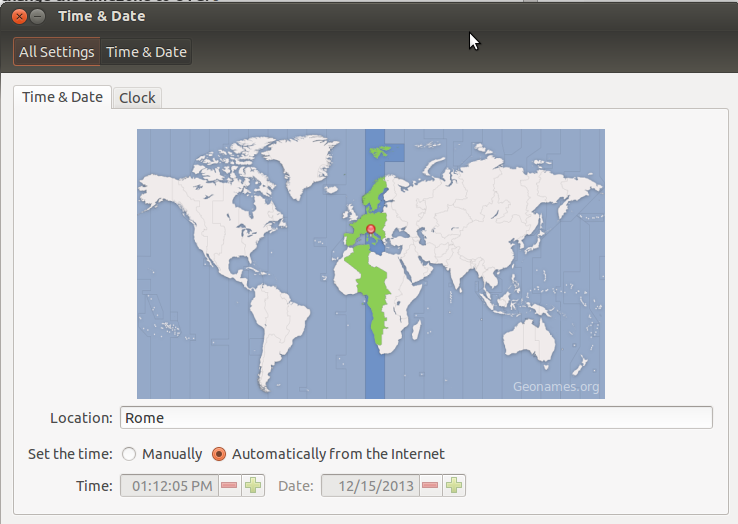 There are two main ways to set the current time via NTP: ntpdate is a command-line tool that, when run, fetches the current time from an NTP server and sets the system time accordingly. ntpd is the NTP daemon which runs in the background and continuously adjusts the time slightly.

For servers, production environments and such, ntpd is better. However, for normal desktop PCs and end users, ntpdate is perfectly fine. In fact, when you install Ubuntu Desktop, it comes with ntpdate preinstalled, but not ntpd.

When you select "Automatically from the Internet" in your Ubuntu system settings as shown in your screenshot above, what happens is that at each boot Ubuntu will fetch the current time using ntpdate from ntp.ubuntu.com. If you want to change that server, you can edit the value of NTPSERVERS in /etc/default/ntpdate.

The alternative is to install ntpd (in package ntp), and configure that via /etc/ntp.conf. This is explained here in more detail:

However, if you do not want to install any additional packages and simply change the default server for ntpdate which comes pre-installed with Ubuntu, simply edit /etc/default/ntpdate.

For Ubuntu 16.10 Desktop the config file (without installing ntp packages) is

8
How to change the time server for the _in built_ internet time in ubuntu 16.04 LTS?
6
Which time server is used by Ubuntu?

2
Timezone appears to be set correctly, but time is 7 hours off
0
How to sync time ubuntu desktop 13.10 client with Centos6.4 server using ntp
0
ntp possible on ad hoc network in ubuntu ? 12.04 onwards
40
How does Ubuntu synchronize time without ntp?
10
How to force an immediate clock/time synchronization/ntp update in 16.04?