This seems like a simple question, yet I could not find any satisfying answer using Google or Ask Ubuntu. 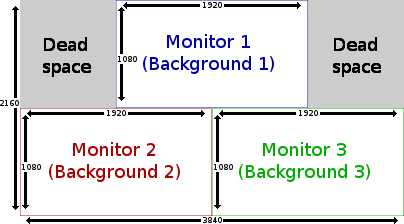 Monitor 1 (on top) is my big TV that's attached to the wall above my two normal monitors.

I am using Gnome 2 with Compiz (aka gnome-session-fallback aka Gnome Classic (with effects) in the login manager dropdown list) on Ubuntu 13.04.

I tried the following methods trying to set a different background for each monitor:

However, this seems like an awful hack to achieve such a simple thing as setting a different background for each of my monitors. It also has several disadvantages:

The first point means this workaround is not robust. The second means it is not efficient. And the third means it's a pain in the butt :)

So my question is this:

Is there some way - using either Gnome 2 or Compiz - to simply tell the system that I want a different background for each monitor? This would be the logical approach to me, as it would actually tell the system what my intention is. It would also be more efficient.

Really, it feels like this cannot be such an uncommon scenario. I would think many people have multiple monitors; and at least some of those must prefer to have different backgrounds on these monitors. So can it be true that there is no straightforward solution, and users are expected to come up with awful hacks such as creating their own custom backgrounds with heavy-weight programs in order to get this to work?

You can use nitrogen

To install it, run the following command in terminal:

Because nitrogen doesn't have a desktop file by default when is installed, you need to run the following command from terminal to start it:

How to use it?

In it's Preferences, add your wallpaper folder, then at the bottom [...] select Screen 1, 2, etc., to set a different wallpaper for each monitor: 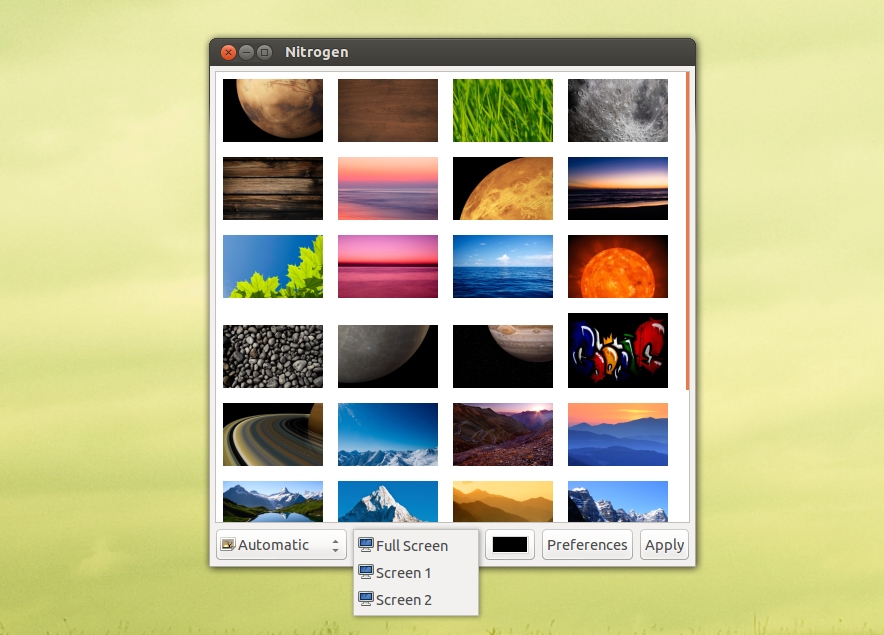 To be able to set a different wallpaper for each monitor, you must disable the file manager from handling the desktop. This means you'll no longer have folders on the desktop.

Then open GNOME Tweak Tool and on the Desktop section, set Icons on Desktop (previously Have file manager handle the desktop) to OFF.

And finally, to have the wallpapers restored each time you log in, add the following command:

to your Startup Applications.

From webupd8.org it seems there are 2 options. (copy from the website plus some extra things added by me):

The default Ubuntu Appearance settings doesn't let you span a single large wallpaper across both monitors or use a different wallpaper for each monitor, but there are two applications that you can use to do this.

Nitrogen seems to be the best option. Syncwall seems to be using the hack you described (large image to split across several monitors.

the XFCE Desktop Manager Plugin (that comes in the xubuntu-desktop package) allows you to edit each display individually while still retaining the folders on your desktops.

A screenshot of my 2 desktops with the manager open :

in the yellow box it says "Move this dialog to the display you want to edit the settings for."

I'm sorry i cant be more help as to giving instruction on to how to install it, nor what the actual plug in is called ( I tried to find it but decided to re-install the whole package instead ) - But hopefully this leads you or somebody on the right track, and this answer can be improved through edits.

HydraPaper is the best option since 2020.

I was glad to see there actual was a Gnome/Unity answer.

That said, I still feel switching to KDE might offer a more consistent experence.

KDE's native settings manager not only allows for multiple wallpapers across multiple monitors, it allows them to be set differently for each virtual desktop AND Activity. (Activity's a like virtual desktops that contain virtual desktops and can be configured to have different settings, such as a screen-saver after 5 minutes of stillness in one activity, but no timeout when switched to another, say for presentations or movies.)

Moreover, it handles the addition and subtraction of monitors on the fly (via plugging and unplugging HDMI) without issue!!

No need to hide your icons from desktop

Not the answer you're looking for? Browse other questions tagged gnome compiz gnome-classic or ask your own question.

418
How do I start applications automatically on login?
46
How to span single wallpaper over dual monitors?
3
How to use custom background picture in Ubuntu 13.10?
12
How do I switch my monitors separately on Ubuntu 14.04?
1
Dual monitor lubuntu how to change wallpaper in extended screen?
2
How do I set different wallpapers for different virtual desktops?
0
Nitrogen missing an option
0
Setting up 2 monitor workspace with Nvidia Optimus and save settings in Xorg.conf

3
Modifying the behavior of <Alt>Tab (possibly) using Compiz
9
Different Wallpapers for each desktop in 11.10
5
Workspace switching not working with 12.04 and Gnome classic with effects
2
Multiple wallpapers in GNOME Shell
2
Compiz cube not working with 12.04 in gnome classic or unity
1
What is the purpose of Compiz (if any), inside Ubuntu 12.04, if I use gnome-classic (gnome-session-fallback)?
2
multiple 4k monitors on 16.04, issues
2
How to include all monitors in Gnome 3 workspace thumbnails