I have installed windows 8 in the partition sda4 (and ubuntu 12.04 was pre-installed) - partition screenshot below - and then tried recommended repair using boot-repair. But after boot-repair, Grub does not detect Windows. I've tried to repair grub twice (using boot-repair), but no gain.

(Earlier I installed windows in logical partition but now, it is in primary then why it doesn't get detected by grub?) 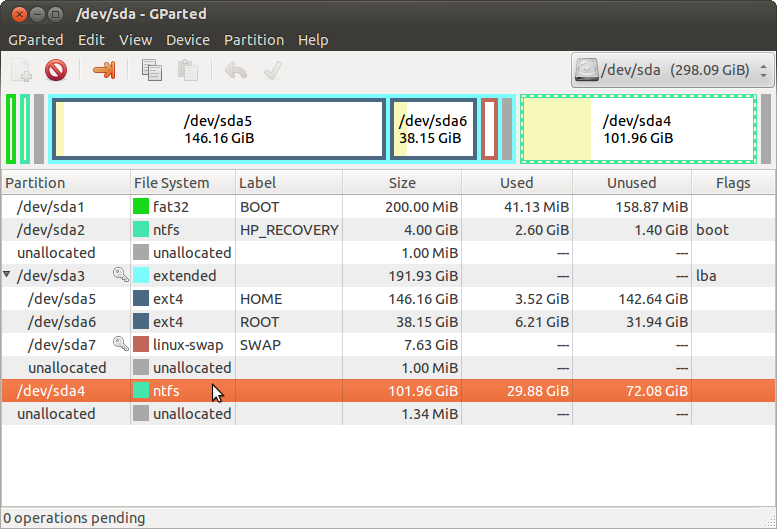 Contents of grub.cfg - updated (Please note that this file is in the directory /boot/grub and NOT in etc/grub. In fact, there is no such directory like etc/grub.)

Also, if it may be related to the problem in any way... Ubuntu does not show the 101GB (NTFS in which Windows is installed) partition in the devices and gparted shows an exclamation sign beside this particular partition, asking to run chkdsk /f on windows and rebooting twice (this was not shown while I was on LiveCD) but I am able to successfully mount this partition using terminal.

More info (if it may help with another question): Initially the /home was around 246GB and I shrank it to 146GB and installed windows in 100 GB (logical partition). Later when I got to know that windows won't boot from logical I managed to move that 100GB (after deleting it) out of extended by moving the 100GB unallocated space to bottom and decreasing the size of extended partition.

I installed windows in this (now) Primary partition and repaired grub. But grub didn't show windows loader option. So I again repaired windows boot loader. Now here I got two windows options, Windows 8 and windows 8 on volume6. The earlier is the option for the windows which I earlier installed when that was a logical drive. My (second - it is not related to Ubuntu though) question is why and how is windows boot loader is getting info about the previous installation of windows as I had deleted the partition later.

This brought so much memory for me from the past which often happened to me.

The fix that worked for me: use your installation cd and start the system off from it.

Select the option from menu, "Rescue the broken system"

You will go through the cycle of series of questions which it would lead you to partition section. When you arrive to that section, escape the process. You then will see the menu and you should see "Install GRUB".

You will then see your GRUB back and it'll detect your dual OS between Win and Ubuntu.

EDIT: Found this article for you: https://sites.google.com/site/easylinuxtipsproject/tips#TOC-Make-Windows-the-first-option-in-the-Grub-boot-menu

Okay. I can't get from you question whether are you able to boot into ubuntu after you did a boot-repair from the Live CD? If you can do that, then do it. Then boot up the installed ubuntu system, and run sudo update-grub from the installed system. After that check whether you can boot into windows and ubuntu. If you can, problem solved, if you can't then update your question with your /boot/grub/grub.cfg from your installed ubuntu system.

Not the answer you're looking for? Browse other questions tagged installation dual-boot grub2 partitioning windows-8 or ask your own question.

351
How can I repair grub? (How to get Ubuntu back after installing Windows?)
11
ubuntu appears in BIOS menu (UEFI)
1
Not Getting OS Selection menu after Boot-Repair