How confidential are automatic crash reports made by apport?

I noticed that starting with Ubuntu 13.10 (or maybe 13.04), thunderbird crash reports are handled by apport, while they were handled by Mozilla's tool before.

How confidential are automatic crash reports made by apport ? I have not seen any option to tell that the program memory may include confidential information.

I could not see any official information from Ubuntu pages, only How to use Apport to Report Bugs in Ubuntu | Ubuntu Manual dated 2011 that says:

If you were entering confidential information when the crash occurred you should click 'Cancel'.

For example, if thunderbird, evolution or any mail tool crashes:

Thank you for your attention.

All crash bug reports filed by Apport are marked private by default and are only visible to people with relevant privileges (generally, the Bug Control members for bugs filed on packages from the repository).

When you are filing a bug report, you can review what information is being uploaded for your own sake. Here's an image of an Apport crash dialog. 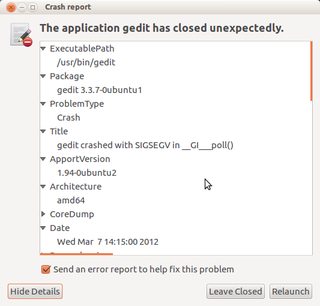 You should closely go through the information being provided under CoreDump and Stacktrace. If it contains information that you are not comfortable being uploaded, you can cancel the process.

Since 12.04, Apport has been silently collecting crash data for Whoopsie without requiring any user interaction. That itself is not a direct privacy problem though because only people who signed the non-disclosure agreement have access to the Ubuntu error tracker.

All bug reports you submit are covered by Ubuntu privacy policy. Quoting relevant sections from it for reference:

When you chose to send an error report, it includes a unique identifier for your computer. This identifier does not identify you, unless you (or someone acting on your behalf) discloses it separately. An error report may include personal information such as the state of programs that were running at the time. You can block future error reports from the privacy panel of System Settings.

Error reports may reveal private information. If you were working on something that deals with confidential or sensitive information, you should not authorize the transmission of the error report.

There has been some research in this area, in the past years. For example:

Not the answer you're looking for? Browse other questions tagged bug-reporting apport or ask your own question.

390
What is the 'whoopsie' process and how can I remove it?
234
How do I enable or disable Apport?
55
How can I track a bug that caused a crash and was reported via apport / whoopsie?
7
Apport error reporting privacy issues

55
How can I track a bug that caused a crash and was reported via apport / whoopsie?
9
apport-retrace fails with error: report file does not contain one of the required fields
2
How can I check if an Apport report does not contain any sensitive information?
5
How can I find my Bug-report on launchpad that I submitted from the Desktop?
1
Apport reports packages to be outdated when they are up-to-date
1
System program problem detected from apport: should i worry about it?