What is a terminal and how do I open and use it?

The terminal is an interface in which you can type and execute text based commands.

It can be much faster to complete some tasks using a Terminal than with graphical applications and menus. Another benefit is allowing access to many more commands and scripts.

A common terminal task of installing an application can be achieved within a single command, compared to navigating through the Software Centre or Synaptic Manager.

For example the following would install Deluge bittorrent client:

To save a detailed list of files in the current directory tree to a file called listing.txt:

Sometimes you will also see the following notation:

A similar notation is:

This means that the command should be run as root, that is, using sudo:

Note that the # character is also used for comments.

How do I open a terminal:

Alternative names for the terminal:

(Although technically they mean different things)

A Terminal is your interface to the underlying operating system via a shell, usually bash. It is a command line.

Back in the day, a Terminal was a screen+keyboard that was connected to a server. Today, it is usally just a progam.

You can open it via the utilities part of the apllications menu, or press Alt+F2 and type gnome-terminal.

The terminal (also known as console) is an application in which you can execute commands directly. It looks like: 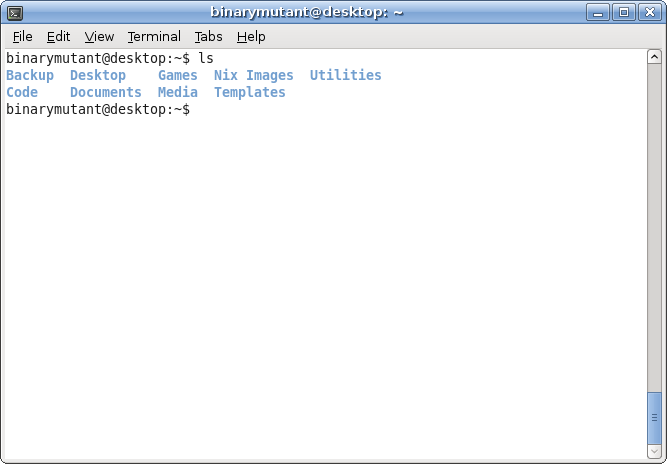 You can start the terminal from Applications -> Accessories -> Terminal.
If you're not using Gnome, but KDE (Kubuntu), you would find it under: Kickoff menu -> Applications -> System -> Konsole.

The Ubuntu wiki has an article about the terminal which includes information on starting the terminal in Xubuntu and Lubuntu, and a basic overview of commonly used commands. It's recommended for reading as it includes much examples as well.

When a person drives a car, that person doesn't have to actually adjust every detail that goes along with making the engine run, or the electronic system controlling all of the engine timing and so on. The dashboard would also be considered part of the the Terminal since pertinent (Having logical precise relevance to the matter at hand) information relating to the user's involvement in operating the car is displayed there. In fact any part of the car that the user has control of during operation of the car would be considered part of the Terminal.

Terminal is a program that allows the user to use the computer without him having to deal directly with it. It is in a sense a protective shell that prevents the user and computer from coming into contact with one another.

Simply said, a Terminal is a CLI (Command Line Interface) to interact with programs in the computer.

In Ubuntu you can open a terminal:

You can use the terminal for various tasks, such as: